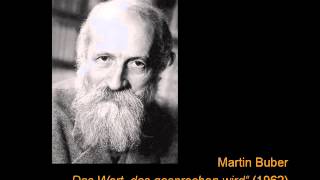 Subsequently, I devoted more time to pondering Phil Huston's carefully written book Martin Buber's Journey to Presence (Fordham University Press, 2007). The title of her book refers to the lectures on "Religion as Presence" that Buber delivered in 1922. A stenographer's copy of Buber's lectures can be found in Rivka Horwitz's book Buber's Way to "I and Thou": The Development of Buber's Thought and His "Religion as Presence" Lectures, translated by Esther Cameron (Jewish Publication Society, 1988; orig. German ed., 1978).

But Huston discusses Buber's 1922 "Religion as Presence" lectures only in her final chapter (pages 185-208). Her lengthiest chapter (pages 106-184) is devoted to discussing Buber's pivotal 1913 work Daniel: [Five] Dialogues on Realization, the English translation of which by Maurice Friedman has recently been reissued by Syracuse University Press in 2018.

I am reasonably certain that Trump represents a person with an undirected soul (i.e., his soul's direction has not been activated).

Buber's imagery of the "whirlpool of happenings" reminds me of the imagery of studying the whirlpool that the Canadian Renaissance specialist and cultural historian Marshall McLuhan (1911-1980; Ph.D. in English, Cambridge University, 1943) uses in the preface to his book The Mechanical Bride: Folklore of Industrial Man (Vanguard Press, 1951, pages v-vi).

McLuhan refers to Edgar Allan Poe's story "A Descent into the Maelstrom." McLuhan says, "Poe's sailor saved himself by studying the action of the whirlpool and by cooperating with it" (page v). However, according to Buber in his 1913 work Daniel, only the person whose soul's direction has been activated can possibly hope to discern "the life of 'divine force' in the whirlpool of happenings."

According to Huston, "Direction that primal tension that moves one to choose intrinsically involves meaning and value. Each person has to make a decision as to whether realization or orientation will be the dominant force in his or her life. It is the way of realization that awakens one to ultimate meaning" (page 140).

I am reasonably certain that Trump is dominated by what Buber refers to in Daniel as orientation, not by realization.

For further discussion of Trump, see Dr. Justin A. Frank's book Trump on the Couch: Inside the Mind of the President (Avery/ Penguin Random House, 2018).

Now, Huston quotes Buber's Daniel at length: "'Direction is that primal tension [Urspannung] of a human soul which moves it to choose and act to realize this and no other out of the infinity of possibilities. Thus the soul strips off the net of directions, the net of space and of time, of causes and of ends, of subjects and objects, it strips off the net of directions and takes nothing with it but the magic of its direction. That is the strength that the soul has found in itself, to which it recalls itself, which it raises out of itself'" (quoted on page 119; bracketed material added by Huston).

Buber also discusses "the strength that the soul has found in itself" further in his famous 1923 book I and Thou, 2nd ed., translated by Ronald Gregor Smith (Charles Scribner's Sons, 1958): "In the language of the Bible, 'Those who wait upon the Lord shall renew their strength' [Isaiah 40:31]" (page 110; I have added the bracketed reference).

Now, my favorite scholar is the American Jesuit Renaissance specialist and cultural historian Walter J. Ong (1912-2003; Ph.D. in English, Harvard University, 1955). I have no doubt that his practice of Jesuit spirituality awakened him to the divine ground of being and ultimate meaning and value and thereby enabled him to escape what Buber in Daniel refers to as orientation. But that's not all.

Related Topic(s): Bible; God; Presence; SOUL; Spirituality; Spirituality; Trump; Trump Ego; Trump Health; Trump Mental Health; (more...) Trump Mental State, Add Tags  (less...)
Add to My Group(s)
Go To Commenting
The views expressed herein are the sole responsibility of the author and do not necessarily reflect those of this website or its editors.