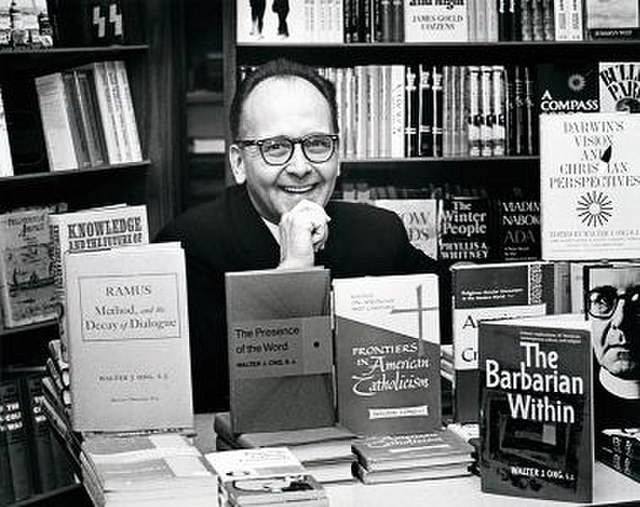 Duluth, Minnesota (OpEdNews) December 30, 2017: Today the most famous Jesuit on the planet is Pope Francis. But I wish that the American Jesuit cultural historian and philosopher Walter J. Ong (1912-2003; Ph.D. in English, Harvard University, 1955) of Saint Louis University (SLU), the Jesuit university in St. Louis, Missouri, was the most famous Jesuit on the planet today. Perhaps his new book will make him more famous. (Ong's family name is English; for centuries, the family name was spelled "Onge"; it is probably related to the English name Yonge.)

Ong's incomplete sixth book-length study has now been posthumously published as the book Language as Hermeneutic: A Primer on the Word and Digitization, edited by Thomas D. Zlatic and Sara van den Berg (Cornell University Press, 2017). Just to be clear, hermeneutic means interpretation. Ong left the incomplete manuscript in the Ong archives at SLU. Professors Zlatic and van den Berg retrieved the incomplete manuscript from the Ong archives and edited it for publication, with an editorial apparatus to assist readers. This book is a primer in Ong's thought. As a primer, it could be titled Ong for Dummies. As a primer in his thought, it could serve as a gateway for new readers to enter into the rich world of Ong's thought in his 400 or so publications.

Professor Zlatic received his Ph.D. in English from SLU in the 1970s. Over the years, he has published numerous essays in which he draws on Ong's thought, including "Faith in Pretext: An Ongian Context for [Melville's] The Confidence-Man" in the book Of Ong and Media Ecology (Hampton Press, 2012, pages 241-280). In Ong's posthumously published book, Zlatic supplied the three essays

Professor van den Berg is currently a professor of English at SLU. She is the senior editor with Thomas M. Walsh of SLU of the book Language, Culture, and Identity: The Legacy of Walter J. Ong, S.J. (Hampton Press, 2011). She supplied the introduction to Ong's posthumously published book (pages 1-8).

Perhaps I should explain that for years Fr. Ong suffered from Parkinson's disease. At about the same time, Pope John-Paul II also suffered from it. I imagine that Ong's decision to stop working on the drafts that Professors Zlatic and van den Berg have collated and edited for publication was based on the impact of Parkinson's on him. In general, Ong loved to revise whatever he was writing. For him, revision was a labor of love. But the devastating impact of Parkinson's undoubtedly made this labor of love unsustainable.

However, a retrospective celebration of Ong's five previously published book-length studies would not be complete without mentioning the Second Vatican Council (1962-1965) in the Roman Catholic Church. If we were to use the year 1967 as a cutoff point in examining Ong's 400 or so publications, we would note that up to and including 1967 he had more publications about religion than he did from 1968 onward. Moreover, he did not publish any significant commentaries on the documents of Vatican II. Instead of escalating his publications about religion from 1968 onward, he tended to concentrate his publications in the direction of literary studies and cultural history. Perhaps I should also mention here that Ong served as the president of the Modern Language Association of America in 1978 -- to this day, he is the only Roman Catholic priest to have held that position.

In 1968, there was a police riot in Chicago at the time of the Democratic Party's national convention there. In the 1968 presidential campaign, both the Democratic and the Republican candidates supported the Vietnam War, which did not end until April 30, 1975.

Ong's 400 or so publications, including information about reprinted and translated versions, are listed in the late Thomas M. Walsh's "Walter J. Ong, S.J.: A Bibliography 1929-2006" in the book Language, Culture, and Identity: The Legacy of Walter J. Ong, S.J., edited by Sara van den Berg and Thomas M. Walsh (Hampton Press, 2011, pages 185-245), mentioned above. Ong's 100 or so book reviews and review essays show the range of his expertise as a Renaissance specialist.

Over the years, I took five courses from Fr. Ong at SLU. In the 1970s, after a burst of creativity in which I wrote drafts of three essays that were eventually published in revised form, Fr. Ong, who had read my three essays and urged me to publish them, called me one day out of the blue to tell me that I should avoid sounding like him and that I should express my own distinctive voice and views. Even though I had discussed topics in my three essays that Ong had not discussed, and thereby had avoided sounding like him, I nevertheless took his admonition to heart. In terms of style, I have not attempted to imitate Ong's style of expressing himself in my own publications. Precision and concision are the hallmarks of Ong's style, which he achieves through revising his drafts for precision and concision. But precision and concision are not qualities of highly oratorical expression, as he himself describes oratorical expression. He describes the oratorical style as favoring redundant copiousness. But he himself eschews redundancy as much as possible within a given publication. Today oratorical redundancy may still be characteristic of speeches at political rallies. But news reports of those speeches put a premium on concision of expression -- sound bites, not highly redundant rhetorical passages. In any event, my writing style tends to be a wee bit more redundant than Ong's writing style. Because his style is so precise and concise, he appears to assume that a word to the wise is sufficient. Of course when you are reading something, you can always go back and reread any previous passage you need to. But we should also note that there are numerous recurring themes in Ong's publications, which in a way are kind of redundant, even though each new iteration of the recurring theme is expressed with his hallmark precision and concision.

However, in the spirit of giving credit where credit is due, I have attempted to give Ong credit when I have used his ideas in my own publications. But I have developed my own voice and views in my various Ong-related publications over the years. For example, I do not hold all of Ong's religious convictions. But I would describe myself as a theistic humanist, as distinct from an atheistic humanist (also known as a secular humanist), because, like Ong, and like Plato, I hold a non-materialist philosophical position, as distinct from a materialist philosophical position.

In the present essay, I will attempt to the best of my ability to explicitly give credit to Ong and to others where credit is due, on the one hand, and, on the other, to make it clear when I am expressing my own views -- even when I draw on certain other authors such as Pete Walker to express my own views. But stand forewarned: I am going to deliberately belabor certain points I want to make here -- points that I consider to be consistent with Ong's thought, but points I make using certain terminology that he does not happen to use explicitly (e.g., affective versus cognitive). Your guess is as good as mine as to why he does not use the widely known terms cognitive and affective. But my guess is that Ong did not use the widely known terms cognitive and affective because he wanted to be more precise and particularistic in spirit. However, even though I see certain points I make in the present essay about cognitive and affective matters as being consistent with Ong's thought, some people may see my points about certain affective matters as digressions from Ong's thought. I understand that possible misinterpretation of my points about certain affective matters, but I want to make my points nevertheless, despite that possible misinterpretation.

For the record, I have discussed a broad swath of Ong's publications in my book Walter Ong's Contributions to Cultural Studies: The Phenomenology of the Word and I-Thou Communication, 2nd ed. (Hampton Press, 2015).

Related Topic(s): Awareness; Catholic; Communications; Communications; Consciousness; Culture; Hebrew; Hermeneutics; History; Jesuits; (more...) Philosophy; Presence; Spirit; Spiritual; Spirituality; Spirituality; Writing, Add Tags  (less...)
Add to My Group(s)
Go To Commenting
The views expressed herein are the sole responsibility of the author and do not necessarily reflect those of this website or its editors.