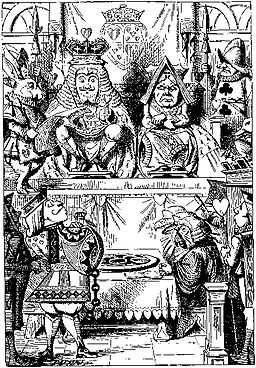 'Why, sometimes I've believed as many as six impossible things before breakfast.' The Queen of Hearts from Alice's Adventures in Wonderland
(Image by John Tenniel)   Details   DMCA

The best way for us to understand Afghanistan is to look at the record of American involvement going back four decades and to look at the record requires a reexamination of President Jimmy Carter's national security advisor, Zbigniew Brzezinski. From the start, U.S. policy formation surrounding Afghanistan has lived in a realm of magical thinking that has produced nothing but a catastrophe of nightmarish proportions. Brzezinski impacted the future of American foreign policy by monopolizing the Carter administration in ways that few outside the White House understand. In his role as national security advisor he put himself in a position to control information into and out of the White House and when it came to Afghanistan - to use it for whatever purposes he saw fit.

According to numerous studies Brzezinski transformed the role of national security advisor far beyond its intended function. In a planning session with President Carter on St. Simon Island before even entering the White House he took control of policy creation by narrowing access to the president down to two committees (the policy review committee PRC, and the Special coordinating committee SCC). He then had Carter transfer power over the CIA to the SCC which he chaired. At the first cabinet meeting after taking office Carter announced that he was elevating the national security advisor to cabinet level and Brzezinski's lock on covert action was complete. According to political scientist and author David J. Rothkopf, "It was a bureaucratic first strike of the first order. The system essentially gave responsibility for the most important and sensitive issues to Brzezinski."

Over the course of four years Brzezinski often took actions without the knowledge or approval of the president; intercepted communications sent to the White House from around the world and carefully selected only those communications for the president to see that conformed to his ideology. His Special Coordinating Committee, the SCC was a stovepipe operation which acted solely in his interest and denied information and access to those who might oppose him, including Secretary of State Cyrus Vance and even CIA Director Stansfield Turner. As a cabinet member he occupied a White House office diagonally across the lobby from the Oval Office and met so often with the President, the in-house record keepers stopped keeping track of the meetings. He used this unique authority to single himself out as the primary spokesman for the administration and a barrier between the White House and the president's other advisors and went so far as to create a press secretary to convey his policy decisions directly to the Mainstream Media. He was also on the record as singlehandedly establishing a rapprochement with China in May of 1978 on an anti-Soviet basis which ran counter to U.S. policy at the time while renowned for misleading the president on critical issues to falsely justify his positions.

So how did this work in Afghanistan?

Central to that issue is the claim that Brzezinski intentionally lured the Soviet Union into invading in order to trap them in their own Vietnam. And central to that claim is the now infamous January 1998 Nouvel Observateur interview with Brzezinski in which he admits to luring the Soviets into an Afghan trap with a secret program.

From the moment Brzezinski's interview appeared in 1998 there has been a fanatical effort by observers on both the left and the right to deny its validity as an idle boast, a misinterpretation of what he meant, or a bad translation from English to French and back to English. Brzezinski's admission is so sensitive, the CIA's former chief of the directorate of Operations for the Near East and South Asia from 1979 to 1984, Charles Cogan felt it necessary to come out for a Cambridge Forum discussion of our book on Afghanistan (Invisible History) in 2009 to claim that even though our view of the Soviet invasion was authentic, the Nouvel Observateur interview could not be right.

Related Topic(s): Afghanistan War; Experience; Military, Add Tags
Add to My Group(s)
Go To Commenting
The views expressed herein are the sole responsibility of the author and do not necessarily reflect those of this website or its editors.