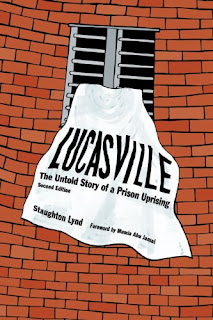 --An interview with author Staughton Lynd

In 1993, the maximum security Southern Ohio Correctional Facility in Lucasville, Ohio was the site of an historic prisoner rebellion, where more than 400 prisoners seized and controlled a major area of the prison for eleven days. Nine prisoners alleged to have been informants and one hostage correctional officer named Robert Vallandingham, were murdered. Following a negotiated surrender, five key figures in the rebellion were tried and sentenced to death. Known since as the Lucasville Five, they are Namir Abdul Mateen (James Were), Siddique Abdullah Hasan (Carlos Sanders), Bomani Hando Shakur (Keith Lamar), George Skatzes and Jason Robb.

The Lucasville Five are now back in the news with an announcement last week that four of the five will be participating in a simultaneous "rolling hunger strike," beginning today, January 3. They are using the hunger strike to protest their convictions (having always maintained their innocence) as well as their living situation, which is more restrictive than for most prisoners on Ohio's death row. The statement issued by the Lucasville Uprising Freedom Network explains that "the hunger strike will proceed in an organized manner, with one prisoner, probably Bomani Shakur starting on Jan.3. The hunger strike becomes official after he has refused 9 meals. Therefore the plan is that 3 days later, Siddiquie Abdullah Hasan will start his hunger strike and 3 days later, Jason Robb will follow. Namir Mateen has a great willingness to participate and plans to take part to the extent that his diabetes will allow."

Staughton Lynd is the author of the 2004 book, Lucasville: The Untold Story of a Prison Uprising, which asserts that the Lucasville Five are innocent men, who were framed by the State of Ohio. In a review of Lucasville, the news website, Solidarity, concludes that "Lynd presents sufficient evidence and argumentation to cast more than reasonable doubt on the convictions of the Lucasville Five." The book's "immediate agenda is to mobilize public opinion to achieve amnesty for the Lucasville Five. In the 1970s, the governor of New York was compelled to grant amnesty to the Attica rebels based upon revelations of state malfeasance. Lynd contends the Lucasville Five's death sentences should be wiped clean on the same grounds."

In the foreword to the upcoming second edition of Lucasville, being released by PM Press in February, death row journalist Mumia Abu-Jamal writes that the Lucasville Five "sought to minimize violence, and indeed, according to substantial evidence, saved the lives of several men, prisoner and guard alike"they rose above their status as prisoners, and became, for a few days in April 1993, what rebels in Attica had demanded a generation before them: men. As such, they did not betray each other; they did not dishonor each other; they reached beyond their prison "tribes' to reach commonality."

Over 40 years ago in Louisiana, 3 young black men were silenced for trying to expose continued segregation, systematic corruption, and horrific abuse in the biggest prison in the US, an 18,000-acre former slave plantation called Angola. In 1972 and (more...)
Related Topic(s): Authoritarianism; Convictions; Hunger Strike; Prisoners; Rebellion; Repression; Rights; Sociology, Add Tags
Add to My Group(s)
Go To Commenting
The views expressed herein are the sole responsibility of the author and do not necessarily reflect those of this website or its editors.