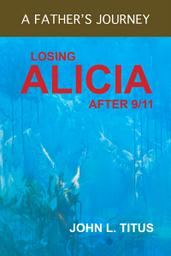 (Image by Unknown Owner)   Details   DMCA
Of all the tragic deaths, there can be none more excruciating than a parent's loss  of a child.

In Losing Alicia , readers not only witness a father's struggle over the murder of his young, vibrant and beautiful daughter, but they walk with him through his agonizing grief after one of the most horrific tragedies in history, September 11, 2001.

Alicia was a flight attendant aboard United Airlines Flight #175, which was the second plane to hit the World Trade Center.

Titus was on his way to work when the first plane struck the North Tower. He saw the second plane on television in real time.

As our nation observes the tenth anniversary of 9/11, Titus offers a side of the tragedy too often missed or forgotten after the rush to war, patriotism and national security consumed the country, as this excerpt from his book shows.


" As Bev and I sat down on the precipice in solemn meditation, I prayed that God would come into our hearts. I prayed for understanding and love. I prayed for Alicia's soul and the souls of the others who had died with her earlier in the day. I prayed for our world."
Americans as a whole have not dealt with 9/11 let alone made sense of it. However, John Titus has.

A counselor by training, Titus pursues an alternative course rather than join the noisy gongs of war, hatred, fear, vengeance and conspiracy. He dares to address and articulate his strong and conflicting emotions and later, to share them with others in this book. This is an act of courage, faith and love that comes from the conviction that the evils foisted on America and the world on 9/11 not be repeated.


" The only way to deal with grief is to go through its very heart to feel the painful feelings; to cry the tears of sadness; to relive those precious moments of bygone days, now mired in pain; to strive to understand the confusing and often irrational thoughts that abound."
However, his book is not aimed only at psychological transformation. It also traces Titus' inner journey of working through his anguish and, like Job in the Old Testament, confronting the great spiritual question that arises whenever disaster strikes: what sort of God allows suffering to happen to innocent people and how does one respond?

" I don't believe for a second that God mapped out a grand plan that included the murder of my daughter. By the grace of God, we are given free will, and in that free will, evil (in other words, self-love) is allowed to manifest alongside divine love and wisdom. But through the temptations presented by evil, love and truth will ultimately prevail, because that is God's will for us."

John Titus -- photo by stevenlberg.info I had the opportunity to hear John Titus speak in 2004 and I met with him and Bev in spring 2011 as he was preparing the final drafts of this book. They are authentic people with deep souls and caring hearts. They know how to love and how to express it.

Americans can learn from Titus, especially since most of us have shut off our feelings about 9/11 long ago and allowed ourselves and our country to react impulsively and violently against the perpetrators.

John Titus did not write this book expecting or wanting sympathy or pity for the loss of Alicia. Instead, his words evoke love and compassion in the reader's heart which, he exclaims, is what life is all about.

Then again, readers will see how Alicia's murder prompted Titus to action. He pours over all the materials he can find on 9/11 and, through legal action, he insists on government accountability regarding its knowledge of terrorist activities and plans. Here we see a responsible father deeply motivated to protect his family.

He is also an empathetic man who literally reaches out to families in Afghanistan whose fallen loved ones have inadvertently gotten themselves in the way of American retaliatory justice.

He has been a spokesman for Peaceful Tomorrows , an organization comprised of 9/11 families who have turned their grief into action for peace; held forums on peace at his place of employment, Schoolcraft College (Detroit); and set up the Alicia Titus Memorial Peace Fund at his alma mater, Urbana University (Ohio).

He even ran the San Francisco marathon, something Alicia had planned to do, because he believed the discipline of training could help his own healing and honor his daughter.

Titus did all of these things with Bev's love, support and participation. Instead of drifting apart, which happens in so many marriages after the death of a child, their relationship with each other and with their entire family grew stronger. He also did it through the spiritual presence and encouragement of Alicia, whom he believes was the essence of love and compassion.

Clearly, Titus and his family, are God's chosen ones called to address the unsavory violence lodged against innocent civilians, so characteristic of our current era. They are there for the rest of us to witness and emulate. This is a tremendous burden for one family but they have willingly taken it on even though they never sought it.

Titus provides a vivid, honest and often poetic presentation that is so compelling readers will not be able to put it down before they finish it. Ideally, people will read the book with family, friends and neighbors in order to reflect on 9/11 from a new perspective--and to help influence this nation's movement away from endless war and retaliation.

What we need most, now, is peace within ourselves and among others in the world and John Titus shows us how to do it.

Olga Bonfiglio is a Huffington Post contributor and author of Heroes of a Different Stripe: How One Town Responded to the War in Iraq. She has written for several magazines and newspapers on the subjects of food, social justice and religion. She (more...)
Related Topic(s): 911, Add Tags
Add to My Group(s)
Go To Commenting
The views expressed herein are the sole responsibility of the author and do not necessarily reflect those of this website or its editors.