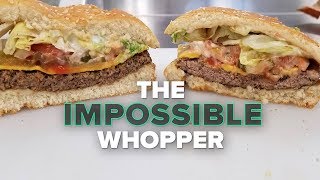 "Two Impossible Whoppers with cheese, please. No onions on one."

Apparently, despite my best efforts in a previous column to argue otherwise, (http://zestoforange.com/blog/?p=14971 ), it is impossible to live life without bacon in America. Even when you order a burger intentionally produced without meat, meat is offered as a topping. You're confusing me, Burger King.

My partner and I became fans of the Impossible Whopper at first bite. It's tasty, juicy, filling and satisfies an occasional craving in a diet that does not include beef. Or bacon.

The bacon option was not the only surprise at the drive-up window. Burger King is now offering two Impossible Whoppers for six dollars, the same as its regular Whopper special offering. Our two with cheese came to eight dollars. A good deal. But, really, doesn't the bacon option kind of miss the point of the Impossible?

Impossible Foods and Beyond Meat, creators of plant-based alternatives to meat and chicken, have sparked a surprising mini-revolution in the way at least some Americans eat. Plant-based diets in general are becoming more popular daily, While vegetarians and vegans may not be rushing to try the new non-meat burgers, those who would like to eat a little less meat because it's healthier for them and also because it would help slow global warming are welcoming this focus on eating more plants.

Beef producers are not. They've gone to court to sue over the use of the word "burger" for plant-based, uh, burgers and an ad that ran in the Washington, D.C., area during the Super Bowl warned viewers that the Impossible Whopper contained an ingredient contained in laxatives. Subtle.

But expect the misleading major-media and social-media campaigns to continue, with so much money at stake and so many consumers these days willing to accept at face value any official-sounding statement that reinforces their prejudices. The real fake news.

It turns out the company that placed the Super Bowl ad, the Center for Consumer Freedom, is notorious for defending wealthy clients (including a wide swath of food-industry clients) against competitors or critics it routinely portrays as phony do-gooders out to deprive people of the right to make their own choices. It describes itself as "a nonprofit organization devoted to promoting personal responsibility and protecting consumer choices".

"We believe that the consumer is King And Queen," its website preaches as it lobbies against what it calls phony health claims and holds up extreme groups like PETA as representative of the campaign for giving consumers more healthful, plant-based choices. It has argued that the cause of so much overweight in America is not overeating, but lack of exercise. Again, it represents a wide range of food producers.

I am not a shill for any company. I didn't tell that guy who asked me, "You don't eat bacon?" that he should maybe at least follow his doctor's suggestion to eat a little less of it for his heart's and his children's sake. I am increasingly concerned, however, that too many Americans are reluctant to try something that might be good for their well-being because it means doing without something they enjoy that may not be so good. Besides, they'll argue, "Those fake meats aren't really more healthful anyway. They've got nasty stuff in them." Or, "They said they're vegan, but they're not." Or, "So what if I like bacon? It's delicious."

Yes it is. In fact, forget beef. Pork is the most widely consumed meat worldwide, according to Pat Brown, CEO of Impossible Foods. He ought to know. While doing battle with the beef industry in the United States and Canada, Brown says his company is about to launch the Impossible Sausage. Beyond Meat has had a Beyond Sausage breakfast sandwich for enjoyment at Dunkin' Donuts for months, but Brown says his company wanted to make sure it got its recipe the way it wanted before releasing it for public consumption.

In addition to Burger King, White Castle was one of the first to offer a plant-based option, with Impossible Sliders. McDonald's is testing Beyond Burgers in Canada, KFC is testing Beyond Fried Chicken, and Starbucks recently said it plans to introduce plant-based breakfast items. So the alternative meats are not going away, misleading advertising or not.

Related Topic(s): Advertising; Bacon; Beef; Burger King; Consumer; Food; Hamburger; Impossible Whopper; OVERWEIGHT; Plant-based; (more...) Super Bowl; Vegan, Add Tags  (less...)
Add to My Group(s)
Go To Commenting
The views expressed herein are the sole responsibility of the author and do not necessarily reflect those of this website or its editors.

STAY IN THE KNOW
If you've enjoyed this, sign up for our daily or weekly newsletter to get lots of great progressive content.
Series: "The food we eat, or don't"