(Historic photo of World Theater on West 49th St. in NYC, opened in 1936 for live theatre with 16th century English pub style lobby and demolished in 1987 for replacement by a chain motel.)

The moderators of a local Facebook group quickly took down a friend's posted link to the 4-part, 2-hour Corbett Report on Bill Gates on the grounds of alleged "covid denial." This is apparently a new thought crime, or what George Orwell called "crimestop," the foundation stone of "Newspeak" prohibiting venture beyond the threshold of any dangerous thought. And what are today's forbidden thoughts? Any rational examination of covid-19, the inflated and ever-morphing assessments of its dangers, ominously intrusive contact tracing that will remain recorded by the state well beyond the declared pandemic, the terrible social and economic sacrifices imposed on societies worldwide, the looming specter of mandatory vaccinations with experimental and insufficiently safety tested genetic fragments, and above all any skeptical views of the scriptwriters and directors of this dark drama. The entire script has now become Sacred Myth descended from on high, protected by threat of excommunication from Facebook, Twitter and YouTube for any who dare to question - much less deflate or defile - its absolute status. Censorship has become suffocating and bizarre.

To remain included within acceptable society, we must now heed Zarathustra's precaution. Nietzsche writes, "Why stealest thou along so furtively in the twilight, Zarathustra? And what hidest thou so carefully under thy mantle? Verily, my brother, said Zarathustra, it is a treasure that hath been given me: it is a little truth which I carry. But it is naughty, like a young child; and if I hold not its mouth, it screameth too loudly."

To revisit yet another prescient mind, we find ourselves increasingly trapped aboard a planetary Pequod in obsessive pursuit of a single avoidable threat while ignoring and inviting all others. Bill Gates appears cast as Captain Ahab in this production with Anthony Fauci cast as press secretary issuing continuous, ever-shifting, evasive and ambiguous statements, obviously stalling for time until emergence of the magic vaccine, untested on animal models, untested with randomized, placebo-controlled efficacy trials, and untested with long-term safety studies. All with quiet complicity of Drs. Burke and Redfield for motives that remain hidden, with no sensible first mate Starbuck on board.

The Pequod was sunk and all but one of its crew lost who lived to tell the tale. Moby Dick is ranked a literary classic for good reason. It is urgently important to identify psychological characteristics of those holding power that put us all at risk. The just-released book by Mary Trump, the President's niece, describes him as learning disabled (with thought complexity confined to tweets) and the emotionally undeveloped product of a seriously dysfunctional childhood, still "a terrified little boy" (which would account for his compensatory bravado). The 2005 book "Bush on the Couch" by Washington psychoanalyst Justin Frank described Bush 43's definitive markers of psychopathic personality, but too late to prevent "Shock and Awe" followed by the horrific Fallujah massacres inflicted by General "Mad Dog" Mattis and Abu Ghraib, survivors of which formed ISIS. The consequences of non-recognition precluding possibilities of timely intervention can be monumental.

Rational citizens must recognize the vital importance of psychological conditions among power-wielders that involve disabled or undeveloped functions including judgment, conscience, empathy, impulse regulation, and what is known in my trade as "ego boundaries." But these go largely unnoticed since they correspond with the same deficiencies in our national psyche.

What's my trade? Following three years as an army psychologist fresh out of grad school during the VN War, I spent five years at a major child study center. Autism was rare at that time, recognized as a severely disabling condition affecting both verbal and non-verbal communication, including touch aversion. It has subsequently become recognized as one end of a continuum designated "autism spectrum disorder" manifesting a range of disability severity along the same dimensions. The variations of ASD have proliferated in recent decades for unknown reasons, but substantial evidence suggests frequent and often simultaneous introduction of multiple attenuated viral genetic materials and adjuvants from vaccines as a causal factor. This trajectory has risen sharply since the 1986 National Child Vaccine Injury Act immunizing vaccine manufacturers from liability, thereby removing business risk considerations compelling appropriate long-term safety testing that has predictably eroded.

Why do I mention autism? The public has become much more aware in recent years of autistic manifestations, and numerous observers of Bill Gates' idiosyncratic behaviors over the years have made speculations suggesting the possibility of Asperger Syndrome. Corbett describes Gates as "awkward" and "tone deaf," which are characteristic features of a well-compensated ASD adult who has learned the rules of social interaction and communication, practiced for social adaptation on a rather mechanical level. Corbett also described him as a "savant" - a term applied to ASD individuals who are very gifted, often obsessively, in one area while remaining significantly disabled in other functions. Gates' very narrow, obsessive foci - first on building his software empire (more copy-and-paste than creative) and then a vaccine empire imagining this as the lodestar to public health and population growth abatement to save humanity - further suggests a picture of high-functioning but blindly unrealistic ASD.

Armchair judgments of an elusive psychological syndrome are necessarily speculative, but examining the characteristics that have led to these perceptions are potentially consequential for the future of us all. However gifted in his original line of work, Gates' inflated self-importance beyond this seems to respect no boundaries. Clinical recognition of "autistic thinking" preceded identification of formally defined autism and ASD, and such thinking seems clearly in evidence, both grandiose and delusional. Gates envisions vaccinating the entire world, holding return to normalcy hostage until then, implying with bizarre ego-inflation that the decision affecting millions of unemployed people with families to feed and hundreds of thousands of floundering small businesses is up to him. With his financial power over the WHO,* CDC ** and public health bureaucracy (broad influence within NIH, especially Dr. Fauci's NIAID), this grandiosity may not be unrealistic. He provides these agencies with now-indispensable funding and support for mutually favored agendas such as vaccines for which government scientists can claim patent rights for products of their taxpayer-supported research. 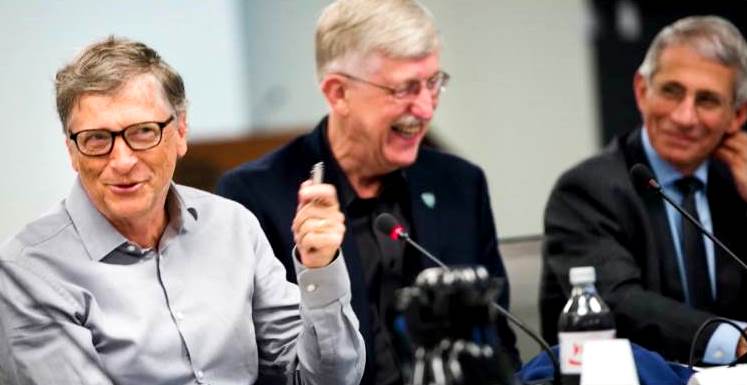 Gates' disarmingly sanguine manner projects earnestness and innocence in the current midst of social and economic chaos. He seems honestly oblivious to realities beyond and created by his own obsession. In my trade we call this "inappropriate affect" seriously out-of-touch with the experienced realities of others. Such emotionally flattened, compartmentalized, unrealistic thinking detached from real-life incongruities and complexities has long been identified in psychology and psychiatry as "autistic" well before a syndrome was identified. Alongside the slickly sociopathic personalities that largely dominate our ruling class, this is a dangerous psycho-political fusion reminiscent of mad medieval kings with their scheming courts and bizarre world domination dreamers with their corruptible executioners not that long ago who have hideously disfigured past societies.

Our captive media collude in concealment of essential corrective knowledge. No effective coronavirus vaccine has ever been developed since their continuous mutations present an ever-moving target. Vaccinations are no trustworthy panacea and have been empirically implicated in widespread irreversible damage, which impelled the industry to secure immunity from liability in order to stay in business. The ongoing lockdown is inflicting enormous economic, health and psychological damage worldwide already far surpassing damage attributable - even accepting shamelessly inflated figures - to SARS-2.

And comparisons of 13 states that resisted early lockdown with 12 contiguous, demographically comparable states that didn't showed no difference in covid fatality rates two months later. Why did none of our overpaid and under-informative "journalists" perform this simple third-grade math? 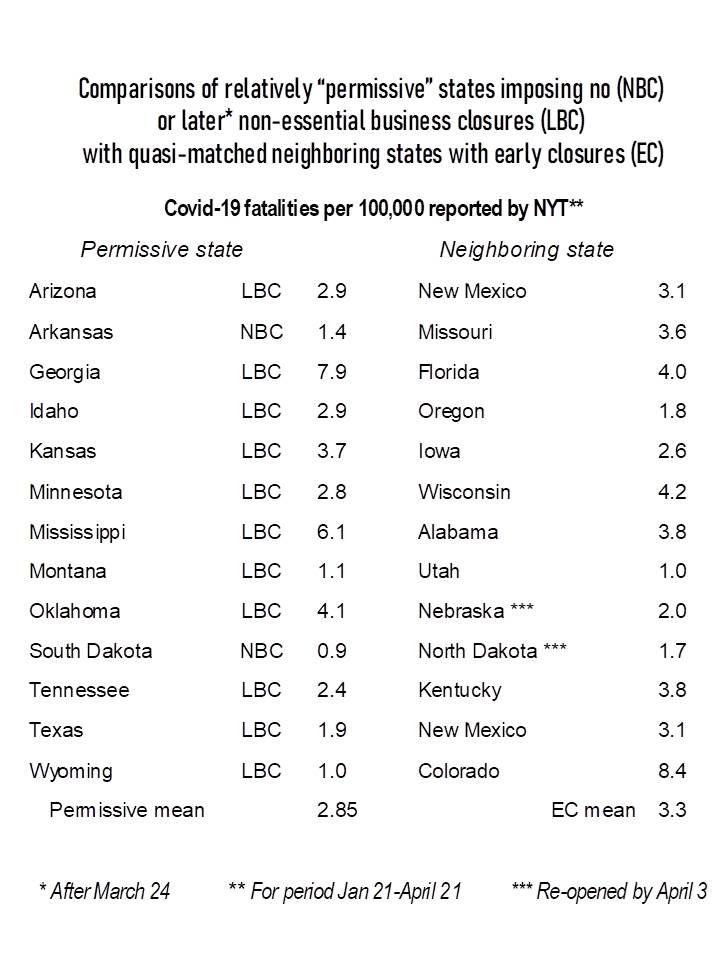 Related Topic(s): Autism; Communication; Corona Virus Coronavirus Covid-19; Corruption; Economic; Government; Health; Health; Lockdown; Scientists; (more...) Technology; Vaccinations; Vaccines, Add Tags  (less...)
Add to My Group(s)
Go To Commenting
The views expressed herein are the sole responsibility of the author and do not necessarily reflect those of this website or its editors.

STAY IN THE KNOW
If you've enjoyed this, sign up for our daily or weekly newsletter to get lots of great progressive content.
Series: "Covid-19 Deceptions & Debacle"