I want to offer an alternative view to those who envision a more gradual uphill climb to real democracy than I believe we - or the world at large - can afford. At this moment in history, I think a not only viable but winning third party is no longer inconceivable. And beyond simply conceivable, it is urgently needed.

chris Hedges
(Image by Cheryl Biren)   Details   DMCA
In October 2013 Chris Hedges published a Truthdig article entitled, "Our Invisible Revolution." He wrote, "As long as most citizens believe in the ideas that justify global capitalism, the private and state institutions that serve our corporate masters are unassailable. When these ideas are shattered, the institutions that buttress the ruling class deflate and collapse. The battle of ideas is percolating below the surface. It is a battle the corporate state is steadily losing. An increasing number of Americans are realizing that we have been stripped of political power. They recognize that we have been shorn of our most basic and cherished civil liberties, and live under the gaze of the most intrusive security and surveillance apparatus in human history. Half the country lives in poverty. Many of the rest of us, if the corporate state is not overthrown, will join them."
"Popular revulsion for the ruling elite is nearly universal," he continued, "it is a question of which ideas will capture the public's imagination." Borrowing Andrew Berkman's metaphor that "revolution is evolution at its boiling point" like a tea kettle heating invisibly until it suddenly boils over, Hedges warned that we must be ready since "social upheaval without clear definition and direction" can descend into chaos enabling the elite to re-establish themselves in the name of order. This has happened repeatedly in Latin America.
But irrespective of the risks, Hedges believes, "It is certain now that a popular revolt is coming. The refusal by the corporate state to address even the minimal grievances of the citizenry, along with the abject failure to remedy the mounting state repression...means that blowback is inevitable."
Envisioning the political spectrum as a yardstick, our current binary system spans about two inches toward the far right end - what political theorist Sheldon Wolin calls "inverted totalitarianism" where industrial capitalism controls rather than serves the state. In a 2014 paper entitled "Testing Theories of American Politics: Elites, Interest Groups and Average Citizens," political science professors Martin Gilens of Princeton and Benjamin Page of Northwestern universities analyzed data on 1,779 national policy issues over a 20-year period spanning the Reagan, Bush I and Clinton administrations. Comparing the correlation of policy outcomes with the viewpoints of average citizens in public opinion surveys, organized political interest groups, the economic elite, and groups representing business interests, they found that the first two groups - representing The People - exercised a "non-significant, near-zero level" of influence.
This truth is felt widely across American society, with reactions ranging from the Occupy movement on the urban left to Oregon's Malheur County wildlife refuge occupation on the rural right. Over 120 million eligible voters failed to vote in the 2010 mid-term election and over 90 million ignored the 2012 presidential election. This included some 80% of 43 million millennials who apparently saw nothing of promise. Less than a quarter of eligible voters are registered as Republicans and less than 30% as Democrats. This leaves about half the electorate up for grabs.
This may explain the current rebellion: Republican primaries dominated by a demagogic figure who has never held public office, and enthusiastic outpouring among Democrats for someone who has never identified with either binary political node. 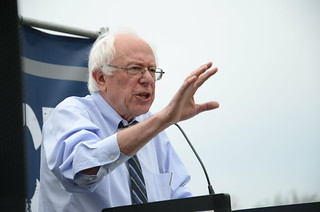 Visibly sincere, Bernie Sanders speaks plainly and without equivocation to his audiences
(Image by AFGE)   Details   DMCA
The teakettle is boiling over, as Hedges predicted. Trump represents the incoherent nihilism about which Hedges warned. Clinton represents everything against which the revolution must be directed. In addition to her deplorable record described in my March 2016 OpEdNews story, Naomi Klein has pronounced Hillary with her cozy corporate ties "uniquely unsuited" to confront climate change with the necessary urgency.
Sanders brings a populist vision of society much like the tested models of Western Europe, as well as the secular socialist Arab states of Iraq, Libya and Syria that we have wholly or partially destroyed, and what many Latin American countries have long been struggling to achieve with some notable successes.
No radical revolutionary, Sanders has always identified simply as an Independent, never a Democrat, aligning him with about half the electorate. Should Clinton avoid indictment and Sanders fail to dislodge the Clinton political machine for the Democratic nomination, he should run as an Independent, taking his Democratic and millions of independent voters excluded from closed primaries with him - especially more suddenly hopeful millennials.
Sanders adamantly opposes a Trump presidency, which could well result from Republican deconstruction of Hillary's deeply vulnerable track record. Clinton polls much more weakly than Sanders against Trump. Bernie's best chance to close the Oval Office door to Trump is to run himself. To succeed, his supporters must remain loyal and uniformly refuse to support Clinton. In states that exclude a primary campaign loser from the ballot under another political banner, write-in campaigns will be needed. Sanders should be pushed from below to run and provided with a house-cleaned Congress.
This can and must be done. As violence-imposed neoliberal capitalism and resistance to it rages and climate change threatens human extinction, revolutionary dynamics are alive worldwide with even complacent America finally awakening. Holding the world's most destructive force in our hands as voters, we cannot wait another four years.

Related Topic(s): Bernie Sanders 2016 Presidential Candidate; Bernie Sanders Supporter; History Revolution; Political Values; Revolution, Add Tags
Add to My Group(s)
Go To Commenting
The views expressed herein are the sole responsibility of the author and do not necessarily reflect those of this website or its editors.