Note to readers: This is the second part and conclusion of an article already published by OpEdNews. 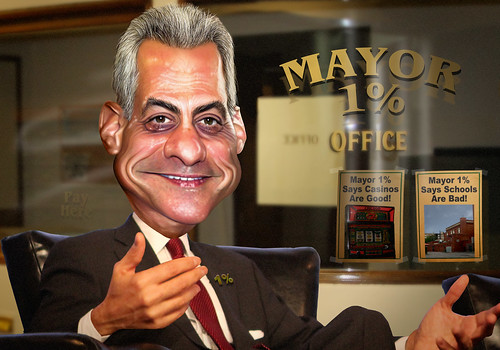 Trump Is Personally a Douche; Must He Also Sanitize Neoliberals?

One common--and utterly uncomprehending--criticism Part 1 of this article received is that by branding neoliberal Democrats "public enemy #1 ," its author was in denial about sheer, dangerous loathsomeness of Trump. And unsurprisingly, neoliberal "Clintocrats" jumped to stigmatize my piece, and my posting of it on Facebook, as the dirty work of some pro-Trump Republican troll.

To answer the Clintocrats, my implied criticism of Trump in Part 1, made very explicit here, should be sufficient.

For those legitimately concerned that branding neoliberals "public enemy #1" implies the dubious assertion that they're worse than Trump, I have two responses.

First, for progressives to whom the Republican Party offers absolutely nothing, most Republican politicians are so far off our radar they don't even rise to the dignity of being enemies; they simply don't inhabit the world of rational adult discourse. Of course, like juvenile delinquents they must be restrained, but they don't anger us by perennially frustrating our expectations, because they never raised any expectations in the first place. The beauty of organizing anti-neoliberal movement under Trump is that, much like Clinton Democrats, Trump's Republicans can be fought as neoliberals-- neoliberals without even a pretense of mitigating sanity. In a Truthout article and an interview with the Real News Network, Henry Giroux dissects Trump's insane, no-holds-barred brand of neoliberalism with devastating insight.

By contrast, neoliberals like Hillary Clinton offer a mitigated neoliberalism (never, of course described as such)--mitigated chiefly by lip service to progressive beliefs in the regulatory and redistributive benefits of government. Add to this a genuine superiority on identity-politics issues (yes, historically persecuted groups do need special protections), and you get neoliberalism with at least a façade of sanity. And that façade is only strengthened by the legal and corporate media persecution of progressive third parties; Democratic neoliberalism looks vastly more sane contrasted with "batshit crazy" Republican agendas than it would compared Green or Socialist Alternative ones, if they were ever properly heard. So in painting a sane faux progressive façade on actual policies of neoliberalism (never named as such), the Democratic Party becomes the epicenter of U.S. neoliberalism. That's why Part 1 of this article described neoliberal tyranny over U.S. politics as being "based in today's Democratic Party."

But to people concerned about describing neoliberal Democrats, rather than Trump Republicans, as public enemy #1, I have a second--and more important--answer. With the timetable for organizing against neoliberals under Trump being tight, it's a matter of strategic emphasis--an emphasis hinted at in the colorful (and purposefully vulgar) heading of this section. Needless to say, describing Trump as a "douche" reflects genuine, well-merited contempt for the orange-skinned monster. But it would amount to demeaning oneself to his level if there weren't a deeper rhetorical purpose here. In fact, it's meant as a colorful way of unmasking the whole sleazy strategy of Clinton neoliberals in regard to Trump ever since they strong-armed the Democratic Party nomination--the same strategy they, unrepentant for their loss to Trump, mean to employ throughout his presidency.

To elaborate that striking, if vulgar, metaphor, not only is Trump personally a douche, but his years of misrule will be made much worse if we let Democrat neoliberals use him as one. Having little to offer of their own but sinister, reckless policy--policies like warmongering, fracking, and "trickle-up" economics that subvert Naomi Klein's climate justice agenda--neoliberals fully intend to use the endless stench of Trump's administration (as they just used Putin's unsubstantiated "election hacking") to deodorize and sanitize their own neoliberal agenda. Given the very short time before Trump's inauguration, we should feel "the fierce urgency of now" in organizing to expose the stench of Democrat neoliberals (not just Republican ones) under Trump. That is the chief strategic reason I branded them "public enemy #1." If we let Democrat neoliberals use Trump as a sanitizing douche, government by political douches--both Republican and Democrat--is our only foreseeable future.

The case of Bernie Sanders is a strange, complicated one, probably overly prone to hagiography by progressive Democrats and demonization by the third-party left. All in all, OpEdNews chief editor Rob Kall (though a tad too hagiographic) gets the key facts right: 1) Bernie did the whole progressive left an immense consciousness-raising favor by running for president as a Democrat and 2) the political revolution Bernie correctly called for depends vastly more on us than it did (or does) on him. As co-founder of the Bernie or Bust movement, I can't help but agree with Kall's premises, because they were the foundational premises of our movement. Probably the attitude of Bernie or Bust supporters toward Bernie differed widely, but its founders felt no need whatsoever either to canonize or demonize Bernie, for our attitude was essentially opportunistic: we needed Bernie to run as a Democrat and call for political revolution.

Whether the net result of Bernie's revolution--or rather, our revolution--was progressive takeover or utter abandonment of Democrats scarcely mattered at all from our viewpoint, which was consistently the viewpoint of Naomi Klein quoted in Part 1 of this article. To wit, "The Democratic Party needs to be either decisively wrested from pro-corporate neoliberals, or it needs to be abandoned." We frankly didn't give a damn which option was the verdict of history on today's Democrats--and we still don't. Understanding that point is absolutely crucial to understanding Bernie or Bust, as it is to understand the successor movement proposed here. We lay our bets wherever the serious anti-neoliberal action is, and approach all attempts at hostile takeover of today's Democratic Party with skepticism but not dogmatism. That said, our default mode is to support America's desperately needed and deeply unappreciated third parties.

Any Democrats who mean to convince us carry a heavy burden of proof: their willingness to name--and specifically identify--Democratic Party neoliberals as the enemies we must hunt to political extinction. And starting immediately, under Donald Trump. If ever a movement had the slogan "Party unity, my ass," that movement is our proposed one.

In this case, it's highly instructive to contrast Rob Kall's approach to a progressive hostile takeover of the Democratic Party with Bernie's own. In his various articles calling for progressive takeover of the Democratic Party (see here, here, and here), Kall hesitates neither to use the damning "N-word" neoliberal nor to call out by name specific Democrats instantiating the species. Whereas Bernie, perhaps understandably for a practicing high-profile Senator, uses vague, nonpolitical terms like "billionaire class," or the vague low-content term "the establishment" when he dares even talk about the billionaire class's political lackeys and cat's paws. Almost a guarantee of failure and co-optation, for political revolutions identify and fight political enemies.

"An institution," wrote Ralph Waldo Emerson, "is the lengthened shadow of one man." The new institutions Our Revolution, as well as #DemEnter and Brand New Congress, are all spinoffs of Bernie's campaign and therefore all instances of his lengthened shadow. Our proposed new movement is for people who fear deeply that those movements will neither dare say the dreaded "N-word" neoliberal nor call out politicians who embody that deeply unlovable species. To paraphrase a leading slogan of the Bernie or Bust movement, "Revolutions break eggs; politicians walk on them." Revolutionary movements that act as diplomatically as politicians aren't revolutionary movements at all.