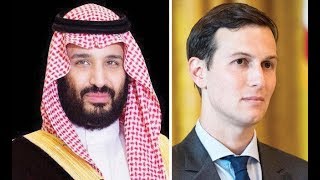 Donald Trump's rash declaration of Jerusalem as the capital of Israel is so out of whack with global opinion and decades of international legal rulings, one has to surmise that the initiative stems from dubious inspiration.

Kushner, a dodgy property dealer with no diplomatic experience, is Trump's unelected top aide, assigned to seal the "deal of the century" -- meaning bring peace between the Palestinians and Israelis.

Like the Saudi Crown Prince, with whom Kushner is said to be close friends, the two neophytes think of themselves as "creative innovators." Wunderkinds.

Given Kushner's orthodox Jewish faith and fervent support for illegal Israeli expansionist policies in occupied Palestinian territories his supposed peace mission with the Palestinians is a dead letter.

American envoys down through the decades have hardly carried much credibility as neutral brokers in mediating the 70-year-old Arab-Israeli conflict. But Kushner's credentials no longer bother to conceal the flagrant bias.

For several months, Kushner has been touting an abstract peace plan that is billed as solving the long-running conflict, without giving away any details about what the supposed plan is prescribing for a putative solution. Sounds like Kushner takes after his business-mogul-turned-president father-in-law -- espousing lots of flannel to compensate for an embarrassing lack of detail.

However, from a report in the New York Times, we seem to get a sneak preview of what the Trump White House under Kushner's guidance is cooking up.

Three days before Trump made his rash declaration on Jerusalem being the capital of Israel last week, the NY Times reported that the Palestinian leader Mahmoud Abbas had already been briefed on a similar precipitate move -- not by the Trump White House but by Saudi Crown Prince MbS.

The meeting with Abbas in Riyadh took place in early November, about one week after Kushner had conferred with the Saudi Crown Prince in private discussions over several days at the royal residence, also in Riyadh.

During his below-the-radar trip to the Saudi capital, Kushner is said to have held late night discussions with the heir to the Saudi throne. What they discussed is not publicly known.

But one week later, the Saudi royal embarked on an abrupt mission: a bold crackdown on Saudi rivals, arresting dozens of family members; as well as making an audacious interference in Lebanese internal affairs by coercing the resignation of premier Saad Hariri (since rescinded).

Also around the same time, Palestinian leader Mahmoud Abbas was summoned to Riyadh by the Crown Prince. Abbas was reportedly told by MbS of a new deal being hatched to settle the conflict with Israel.

Related Topic(s): Crown Prince Mohammed Bin Salman; Donald Trump And Isreal; Iran; Israel; Jared Kushner; Jerusalem, Add Tags
Add to My Group(s)
Go To Commenting
The views expressed herein are the sole responsibility of the author and do not necessarily reflect those of this website or its editors.