As a presidential contender, the New York senator can and should highlight her vital struggles for Pentagon accountability. 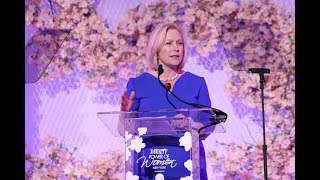 Kirsten Gillibrand has formally entered the crowded competition for the 2020 Democratic presidential nomination with an appeal for Democrats to mount a campaign that answers the question: "Will brave win?"

The senator from New York is a politician in progress. She served in the House as a Blue Dog Democrat who got high marks from the NRA and lots of campaign cash from corporate interests. Now, she's rejecting corporate-PAC money, championing the Green New Deal and Medicare for All, and highlighting an F-rating from the NRA.

This trajectory has inspired a fair share of skepticism. But Gillibrand is certainly not the only 2020 contender who has recognized that Democrats must evolve to the left, and she has done so by taking some bold stands -- such as calling for the elimination of the US Immigration and Customs Enforcement agency. She deserves credit for that. And she deserves credit for being ahead of the curve when it comes to holding the Pentagon to account.

For instance, CBS's 60 Minutes once described Gillibrand as "the political face of the #MeToo movement." She earned that title not merely with a controversial call for fellow Senator Al Franken to resign over sexual-harassment allegations, but also through her many years of advocacy on behalf of women who face sexual harassment while serving in the the armed forces.

Gillibrand's history of working to protect women in the military should certainly be highlighted in her presidential bid. But there is another advocacy with regard to the military that Gillibrand ought to emphasize.

Gillibrand makes a big deal about the importance of maintaining strict civilian control of the military, as it is outlined in a Constitution that sought to chain the dogs of war by requiring that the Congress declare the intent of the United States to engage in military conflicts and by empowering an elected president to serve as commander in chief.

Related Topic(s): Conflict; Congress; Constitution The; General James Mattis; Kirsten Gillibrand; Military; Military In Politics; Pentagon, Add Tags
Add to My Group(s)
Go To Commenting
The views expressed herein are the sole responsibility of the author and do not necessarily reflect those of this website or its editors.