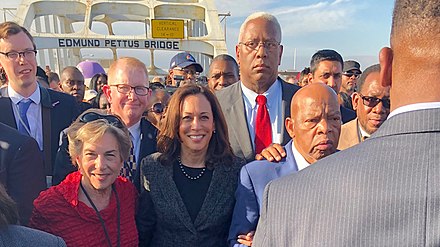 As you no doubt know by now, Democratic presidential candidate Joe Biden has chosen US Senator Kamala Harris (D-CA) as his running mate.

You've probably also noticed the first salvo of Republican attacks on Harris: She's "not really black," and she may not even be a "natural born citizen" as required by the Constitution to hold the office of president or vice president.

No one sane or intelligent finds either of these attacks convincing.

One need not be a direct descendant of slaves in the antebellum American South to be "black." Harris, the daughter of an Indian mother and a Jamaican father of African descent, has been treated as a member of the African-American community, both by that community and by society at large, for her entire life.

Nor must one be the child of American citizens to be a "natural born citizen." Harris was born "in the United States, and subject to the jurisdiction thereof," per the 14th Amendment. Her claim to "natural born citizen" status is better than that of 2008 Republican presidential nominee John McCain (born in Panama) or 2016 Republican nomination contender Ted Cruz (born in Canada, with a Cuban father).

These attacks on Harris miss the point entirely, and I find that neither surprising nor coincidental. The attacks that actually make sense boil down to this:

Skin color and eligibility concern trolling aside, Kamala Harris would make a perfect post-Nixon Republican candidate for any office, including president or vice president.

Harris made her name as a "tough on crime" prosecutor.

As San Francisco's district attorney, Harris dramatically increased the number of prosecutions for marijuana possession (thereby encouraging higher arrest rates). Nearly 2,000 San Franciscans found themselves entangled with the "justice" system over possession of a plant she now jokes about smoking herself and says she wants to legalize.

In her one-and-a-half terms as attorney general of California, Harris oversaw the incarceration of nearly 45,000 new African-American, and more than new 80,000 Latinx, prisoners, several thousand of them for victimless "drug crimes." When it comes to persecuting African-Americans, Bull Connor had nothing on Kamala Harris.

When she wasn't hassling people of color, Harris spent her time as AG protecting corrupt and violent cops, fighting against the release of exonerated prisoners, and engaging in showy arrests without legal basis (e.g. her instantly dismissed charging of Backpage CEO Carl Ferrer with "pimping" for publishing material she disliked).

Harris doesn't seem to be a Democrat based on any particular conviction -- at least not any conviction matching the current Democratic mood. She just climbed the political ladder of the party in power where she happened to live. Republicans who question her racial background and citizenship status would carry her to 1600 Pennsylvania Avenue on their shoulders if she had an "R" next to her name.

Martin Luther King, Jr. dreamed of a world where people "will not be judged by the color of their skin but by the content of their character." By that standard, Kamala Harris is completely unfit for the office of vice president.

Related Topic(s): 2020 Elections; Kamala Harris, Add Tags
Add to My Group(s)
Go To Commenting
The views expressed herein are the sole responsibility of the author and do not necessarily reflect those of this website or its editors.