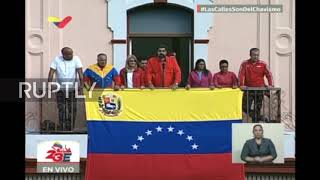 Venezuela President Nicolas Maduro on January 23, 2019 announcing all diplomatic relations with US broken and all US diplomats have 72 hrs to leave the country.

It's January 2019 and the following perfectly illustrates how the US conducts international relations which according to "official" Washington America doesn't interfere in the internal affairs of other countries or exercise hegemony over them as well.

In response the legitimately elected government of Venezuelan President Nicolas Maduro broke all diplomatic relations with the US giving all American diplomats 72 hours to depart the country.

Then last night US Secretary of State Mike Pompeo issued the following:

"The United States stands with interim President Juan Guaido, the democratically elected National Assembly, and the people of Venezuela as they peacefully restore constitutional order in their country. We stand ready to support interim President Guaido as he establishes a transitional government and carries out his constitutional duties as interim president, including determining the status of diplomatic representatives in the United States and other countries.

We call on the Venezuelan military and security forces to continue protecting the welfare and well-being of all Venezuelan citizens, as well as U.S. and other foreign citizens in Venezuela. We call on all parties to refrain from measures that are inconsistent with the privileges and immunities enjoyed by members of the diplomatic community. The United states will take appropriate actions to hold accountable anyone who endangers the safety and security of our mission and its personnel."

How's that for arrogant chutzpah.

Trump previously described the Maduro government as an "illegitimate regime", though Maduro was overwhelmingly elected to a 2nd term in last year's presidential election.

Russian Foreign Ministry spokeswoman Maria Zakharova put it succinctly, "The US 'handpicking' of a government in Caracas perfectly illustrates the true Western sentiments toward international law, sovereignty and non-interference in internal affairs of states". Leave it to the Russian's to state the truth, something one won't find in the pages of the New York Times or Washington Post that have become the complicit enablers and un-official organs of the US state.

The outrageousness of US actions goes beyond the pale. It's as if the Monroe Doctrine-its original intent was to keep the Western hemisphere free from European intervention but with US becoming a world power the doctrine essentially gave the US the right to intervene anywhere in its sphere of influence in this hemisphere-still applies.

Now with the US strutting about all over the world disregarding all norms of international law its openly acknowledged support for an obvious coup in Venezuela becomes the "new normal".

Retired. The author of "DECEIT AND EXCESS IN AMERICA, HOW THE MONEYED INTERESTS HAVE STOLEN AMERICA AND HOW WE CAN GET IT BACK", Authorhouse, 2009
Related Topic(s): Coup Attempt; Imperialism; Intervention; Venezuela, Add Tags
Add to My Group(s)
Go To Commenting
The views expressed herein are the sole responsibility of the author and do not necessarily reflect those of this website or its editors.