"We know that we are often judged by the company we keep. We know how influential classmates, friends, and other peer groups can be. If any of our companions are prone to be unrighteous in their living, we are better off seeking new associations immediately."
- Joseph B. Wirthlin

LAUSD School Board candidate, Marilyn Koziatek, announced her endorsement by Common Core proponent Arne Duncan with great fanfare. Her campaign consultants seem to have had second thoughts about that move, as Duncan's name has been scrubbed from her website and Twitter feed. However, there are still plenty of other endorsements that Koziatek lists who should concern anyone who cares about the students of Los Angeles and good governance. Here are a few:

Antonio Villaraigosa is the former Mayor of Los Angeles who left office with "no job, no house, no car." Within the next four years, he had "made more than $4 million by advising [a variety of] companies", including Cadiz, a company seeking to plunder groundwater from the Mojave desert. Cadiz was co-founded by Keith Brackpool, whom the Los Angeles Times says is one of his closest friends.

As mayor, Villaraigosa tried to take away the right of citizens to democratically elect members of the school board and would have instead put the governing board under mayoral control. He was also "making all the moves behind the scenes to make" John Deasy the Superintendent of the LAUSD. This resulted in the $1.3 billion iPad scandal, the $189 million MiSiS crisis and a culture of bullying that destroyed any vestige of teacher morale. In other words, all of the mismanagement that Koziatek supposedly rallies against.

Villaraigosa's support of under-regulated charter schools earned him the support of the charter industry when he ran for governor in 2018. As a result "a handful of wealthy charter school supporters" managed to spend "$13.7 million in less than a month to boost Villaraigosa's chances". This is the same group of millionaires and billionaires who are funding the negative advertising against Koziatek's opponent, Scott Schmerelson.

Monica Garcia had so little support in her board district that the charter school industry had to spend $622,536.89 to get her reelected in 2017. Her donors included employees of Celerity Educational Group, a charter school chain that was raided by the FBI during the campaign. The founder of Celerity eventually "plead guilty to one count of conspiracy to misappropriate and embezzle public funds".

Garcia began her career at the LAUSD as Jose Huizar' Chief of Staff before he was elected to the Los Angeles City Council. Huizar is currently under indictment "for allegedly conspiring to accept roughly $1.5 million in bribes from developers trying to curry his favor."

On the board, Garcia has been openly hostile to students with special education needs, saying that they take money away from "our own kids." She voted to continue a court fight with parents of children who wanted to maintain access to special education centers. When UTLA presented evidence that charter schools were serving a lesser percentage of students with special education needs, Garcia was the first to step in with excuses. The charter school industry has yet to be held accountable for this exclusion of the most vulnerable students from its rosters.

Tamar Galatzan was the LAUSD District 3 Board Member voted out in 2015. A strong supporter of failed Superintendent John Deasy, she failed to provide any oversight as he drained billions from the district coffers. At Galatzan's direction, the special education centers in board district 3 were set for closure. Schmerelson's election saved these schools that serve the district's most vulnerable students.

Caprice Young is one of the former LAUSD Board Members responsible for the purchase of the Beaudry headquarters building that Koziatek now wants to sell. After being voted out of office, Young has made a series of career choices that have transferred public funds to her employers at the expense of students in the LAUSD. 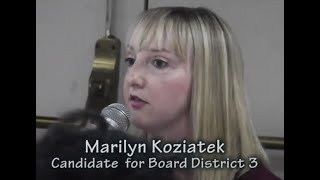 Marilyn Koziatek Never Rejected The Endorsement Of Those Who Paid For These .Unacceptable. Ads Marilyn Koziatek describes the antisemitic mailers, paid for by the California Charter School Association (CCSA) as .crude., .inappropriate. and .unacceptable.
(Image by YouTube, Channel: Carl Petersen)   Details   DMCA

When the California Charter School Association Advocates attacked former LAUSD Board Member Bennett Kaisyer with flyers that were "misleading and racially inflammatory in nature", Board Member George McKenna immediately asked for the group to withdraw their endorsement of his candidacy. There has been no such bravery by Koziatek in this election.

Koziatek described the anti-semitic CCSA ads sent on her belhalf as "crude", "inappropriate" and "unacceptable," but has refused to repudiate their support. Instead she proudly lists their endorsement on her web site. Like Ref Rodriguez and Nick Melvoin before her, Koziatek is willing to look the other way as the charter school industry engages in bigotry as long as it will help her to get into office. Is this "win at all costs'' behavior what we want to model for our children?

Speak Up is a pro-privatization group formed to support the election of Nick Melvoin. While this astroturf group pretends to represent parents, they are just another version of the CCSA, and like its big brother, is comfortable using bigotry and lies to sway the court of public opinion. The most notable example was when this group of parents from the West Side argued against seating Jackie Goldberg as a placeholder for the District 5 board seat saying that this seat was not designed to be held by a white woman. The voters disagreed and overwhelmingly voted Goldberg onto the board. This did not change the fact that the stakeholders of the board district were unrepresented for months while a special election could be held.

At the beginning of the campaign, Abby Bailes, a board member on the Northridge West Neighborhood Council, made an attempt to put together a town hall meeting that purported to inform parents about the sex education programs being taught in our schools. While saying that this forum was neutral, the scheduled speakers were from groups that not only opposed sex education but also held bigoted views against the LGBTQ+ community. This event was eventually held outside the neighborhood council system. 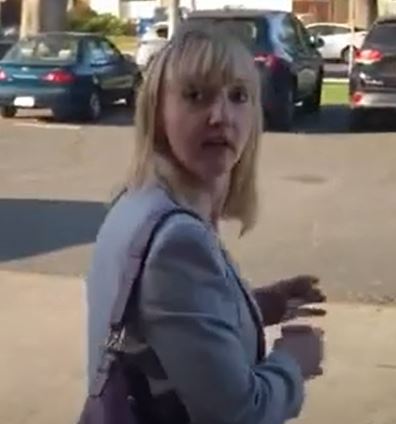