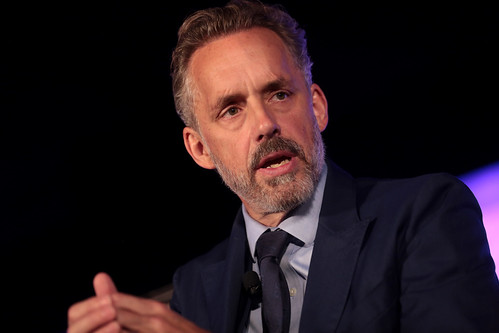 Duluth, Minnesota (OpEdNews) November 5, 2019: On October 14, 2019, I read Dr. Carol Horton's thoughtful review of the new roughly two-hour documentary film "The Rise of Jordan Peterson" produced and directed by Patricia Marcoccia and her husband and co-producer Mazier Ghaderi both Canadians.

As Dr. Horton explains, their documentary film is being screened in certain theaters in Canada and the United States. But I cannot imagine that it will be shown in theaters in Duluth, Minnesota, where I live, because Professor Jordan Peterson is not well enough known to interest an audience in Duluth. Even though the University of Minnesota Duluth, where I taught from 1987 to 2009, tends to lean liberal, Duluth is part of a congressional district in which a Republican was most recently elected (Congressman Pete Stauber), and at the present time, President Donald Trump is actively courting northern Minnesota in the hope of carrying the state in the 2020 election.

Now, according to Dr. Horton's review at Quillette, Patricia Marcoccia and Mazier Ghaderi approached Professor Peterson in 2015 about doing a documentary film about him and his work in other words, well before he released the first of his three controversial YouTube videos titled "Professor Against Political Correctness" on September 27, 2016. Dr. Horton, who holds a Ph.D. in political science from the University of Chicago, says, "Patricia Marcoccia wanted to make a film about Professor Peterson before he became a public figure. She'd become interested in his work while she was a college student studying psychology at McMaster University in the early 2000s. 'I found his work on the psychology of meaning very impactful,' she explains. 'And I knew he was having a big impact on his students over in Toronto, too.'"

However, I wish that Dr. Horton had asked Patricia Marcoccia to explain more fully just what she means by the impact that Professor Peterson was apparently having on students.

Dr. Horton's review is available online at the website for Quillette:

More recently, Mark Peterson has posted a review of their documentary at Wired: "'The Rise of Jordan Peterson' Doesn't Tell You What to Think," in which he quotes both co-producers:

Now, the American President Harry Truman famously said, "If you can't take the heat, get out of the kitchen." The Canadian psychology professor Jordan Peterson (born on June 12, 1962) can take the heat of controversy controversy which he himself started on September 27, 2016 when he released the first YouTube video "Professor Against Political Correctness" criticizing the political-correctness zealotry expressed in the Canadian government's then-pending Bill C-16. Subsequently, he stirred up further notoriety through two further YouTube videos about the then-pending bill and through speaking engagements. His growing notoriety earned him both fans and detractors. Like so many other controversies, the controversy over Professor Peterson's critiques of political-correctness zealotry have generated more heat than light about him and his views.

But people who are not college graduates are probably not likely to be among the people who bought Professor Peterson's 2018 400-page self-help book 12 Rules for Life: An Antidote to Chaos (Random House Canada) more than three million copies of which have been sold thus far -- according to his website:

Related Topic(s): Boys; Catholic; Climate; Consciousness; Courage; Girls; Identity; Loyola; Men; People; (more...) Shakespeare; Spirit; Spiritual; Trump; Women; Zealotry, Add Tags  (less...)
Add to My Group(s)
Go To Commenting
The views expressed herein are the sole responsibility of the author and do not necessarily reflect those of this website or its editors.