My guest today is Steven Rosenfeld, an author, senior writing fellow and chief correspondent of Voting Booth, a project of the Independent Media Institute.

Joan Brunwasser: Welcome back to OpEdNews. We spoke not long ago about the midterms: Midterm Recap with Voting Booth's Steven Rosenfeld [11.28.18]. Yet there has been a lot of breaking election news that was not directly tied to the midterms and which we didn't have time to discuss. Thanks for agreeing to a follow-up. Let's talk about Jill Stein and the recent resolution of her lawsuit against the State of Pennsylvania. I'm sure that many of our readers have forgotten, if they ever knew, about this lawsuit. Can you first give us some context, please? When did Stein sue and why?

Steven Rosenfeld: Readers may remember that Americans in vast stretches of the country were stunned that Donald Trump was elected in November 2016 by less than 80,000 votes in three final battleground states. As is always the case in election, voters wanted to know what happened, starting with whether votes had been accurately counted. Neither the Hillary Clinton campaign, nor state Democratic parties in these three states (Michigan, Wisconsin, Pennsylvania) wanted to pursue a recount to verify the votes. The Green Party presidential candidate, Jill Stein, stepped in and filed for the recounts. The party has long stood for more transparent and verifiable elections. It had done this before; in 2004, in Ohio, in a joint filing with the Libertarian party.

Suffice it to say that there was sufficient angst and interest to crowdsource the multi-million dollar filing fees and start this process in Wisconsin and in Michigan. However, in Pennsylvania, which had a Democrat-run executive branch, there was a catalogue of obstacles that barred a meaningful effort. First, 16 counties had all electronic voting machines, meaning there were no ballots to recount; only whatever was recorded on computer memory cards. The state only allowed recount petitions to be filed at the local level, which led to a logistical nightmare because not every jurisdiction even let Greens file. Then state judges opposed the recount effort; with one saying the party needed to put up a $1 million bond. All this and more led Stein and local residents to file a federal lawsuit, which was settled last week.

JB: Before we jump to the lawsuit itself, let's talk a bit more about the mechanics and, first of all, the unconventional funding of it. If I recall correctly, Stein put out a call for donations for the recount. It was around Thanksgiving weekend, normally among the quietest times of the year, when people are focussing on family and turkey and probably Black Friday as well. Stein was roundly criticized and her motives scrutinized for not just accepting the official version of the count. Ultimately, the public's response to her appeal was swift and almost miraculous. Can you remind our readers what happened?

SR: What happened was John Bonifaz, a longtime voting rights attorney (who also represented the Greens and Libertarians in 2004's recount) was hearing troubling reports surrounding the close vote counts from activists, computer scientists and academics. Foremost were concerns there could have been cyber security breaches tied to Russian hacking. (Subsequent investigations did not find evidence of hacking in these three states.) In Michigan, the early vote count reported some 70,000 ballots with no presidential vote, which is a very high undervote (or no recorded vote) rate. These concerns, atop the angst that Trump could be president, led Bonifaz to contact the Clinton campaign to urge them to seek a recount to understand what happened, or, if not, to suggest donors who might support the Greens' effort. Those talks went in circles and then nowhere until the start of Thanksgiving week.

At that point, the Greens decided to go public and crowd-source donations. That was a last-minute decision and a bit of a Hail Mary. Starting midday on Wednesday and continuing over the weekend, they raised $7.3 million from 161,000 online donations. The mainstream media, led by GOP-friendly Fox and Brietbart.com scoffed. But Stein still hoped it would be possible to get answers to basic questions, such as were the counts accurate? She later said, "We had little idea how hard the establishment would fight against transparent, accountable recounts." 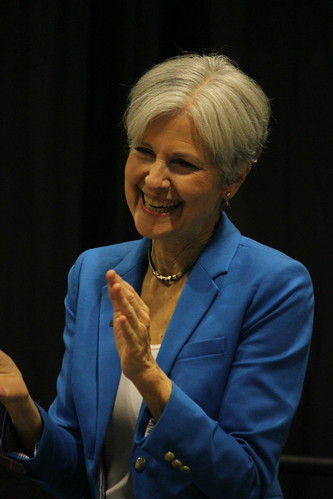 "We had little idea how hard the establishment would fight against transparent, accountable recounts." ~Jill Stein

JB: That's an amazing outpouring of support for transparent and verifiable elections, I'd say. What happened next?

SR: What followed were different processes began in each of the three recount states. Without getting into the weeds, state officials in GOP-run Michigan told Detroit election officials that they couldn't manually examine thousands of ballots in storage boxes (an astoundingly anti-democratic decision, in my view) and then won a court order to shut down the entire recount before the counting ended. It was like a mini version of what happened in Florida in the 2000 election. In Wisconsin, the Greens wanted to do a manual examination and hand count of ballots, instead of simply running the paper through high speed scanners. A judge agreed that hand counts were preferable but would not order counties to do them. When that entire process was over, the result didn't change the outcome. (Still, activists saw that central tabulators were connected to cellular modems, a cyber security risk. They also saw the hard reality that many election officials didn't like the close-up scrutiny.)

In Pennsylvania, a different scenario unfolded. There, recount petitions had to be filed locally. (In 16 counties, where DREs were used, there could not even be a recount, because there was no record to recount; just recorded votes on computer memory cards.) The counties where recounts could be done had differing post-election timelines with certifying their results. The lateness of the Green's filing meant that some counties were already done before the recount petitions were received. The state's election department wasn't helpful, offering uniformity or guidance. When the Greens went into state court, they were frequently treated poorly; such as being told they needed to file a $1 million bond. By the time this all wrapped up, it wasn't possible to do anything approaching a real recount. Some counties made a serious effort to verify votes, but there was no systematic approach where anything substantive could be discerned about the presidential vote. (In contrast, this exercise exposed a deeply flawed recounting process).

By late December, the Green's lead attorney wrote to then-U.S. Attorney General Loretta Lynch complaining about this byzantine state of affairs. And they filed a federal suit, which literally took two years to reach a settlement where, now, the state is agreeing to replace its voting machinery by 2020 and have a pre-certification auditing process in place by 2022.

JB: What does the settlement look like? How much difference can it make? After all, bad voting machinery can be replaced by different but equally bad voting machinery. That is not a step toward safer, more accurate elections and more time has passed using a sub-standard system that safeguards nothing.

SR: The settlement, as I read it and Stein explained it to me, has a few threads. It requires the state to replace its voting systems with paper ballot systems by 2020. It requires a pre-certification audit process be in place by 2022. It allows the Green's representative, University of Michigan computer scientist Alex Halderman, to take part in meetings as these steps go forward. And it allows the Greens to go back into court if it falls short of these broad goals.

STAY IN THE KNOW
If you've enjoyed this, sign up for our daily or weekly newsletter to get lots of great progressive content.
Series: "Progressives"