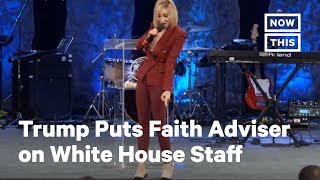 It's unraveling. Well, to be accurate, the Trump presidency has never been wrapped too tightly and he has always been loosey-goosey about such things as the Constitution, the law and the truth, but now the frayed strands of denial are becoming harder for even an occasional Republican to ignore.

The change struck me recently when Mick Mulvaney, Trump's acting Mr. Everything and currently acting chief of staff, said at a well-attended and well-recorded press conference that, of course, there was a quid-pro-quo proposal made by Trump to the president of Ukraine, a proposal that is now the focus of impeachment hearings in the House of Representatives. In fact, Mulvaney went on to say the White House did it all the time with foreign leaders.

"Get over it!" he exclaimed defiantly, exhibiting the arrogance of the ignorant that surely will cost him his job. It's one thing for the boss to indict himself with his own words, as Trump has frequently done, but "yes men" are wise to be stingy with their own words when defending the indefensible. Mulvaney has never been that type.

When Republicans as well as Democrats expressed shock at this bold admission of executive extortion masquerading as diplomacy--you'll get U.S. financial aid if you try to dig up dirt on the Bidens--Mulvaney was quickly dispatched to deny he said what the assembled media had recorded him saying. This trick, insisting you didn't hear what you heard, only works for Trump because he's assembled enough sycophants around him and throughout the government (hello, Lindsay Graham) that it's taken this long for Democrats in Congress to begin a serious effort to remove him.

But it won't work for Mulvaney, because, first of all, everyone knows he's a stooge and, more to the point, like virtually everyone in Trump's protective cocoon, he's expendable. There's always a Matt Gaetz auditioning to be the emperor's next mascot.

Gaetz made his play for Mulvaney's job by leading a platoon of House Republicans on a mission to storm closed hearings in the pre-impeachment process. This was not only a stupid high school stunt that should have embarrassed all who took part, it was also a serious breach of security and violation of House rules. The stormers said Democrats were holding secret depositions, even though there were Republican committee members in the room and a dozen of the stormers themselves were entitled to be in there. But that would mean doing their jobs rather than staging a phony protest to try to delegitimize the process. Pure desperation.

When it turned out Gaetz was acting with Trump's blessing, the unraveling was even more obvious. Since then, there's been nothing but name-calling by Trump (veteran government employees who testify are "traitors" or "scum"), refusal by White House staff to honor congressional subpoenas and demands that the whistleblower's name be revealed.

That last is the nastiest, an indication of where Trump and his shameless acolytes (add Rand Paul to the list) have descended. Of course, there are laws to protect the identity of whistleblowers so that they feel safe enough to come forward with their concerns of government wrongdoing without fear of retribution. But Trump operates out of fear all the time. When he's scared, he turns scarier and there's not much scarier than the person occupying the most powerful position on the planet telling his supporters, some of whom have displayed violent tendencies, that the whistleblower and those corroborating his or her story are traitors leading a coup to topple their leader.

In addition to being an act of desperation, this can also be considered an impeachable offense--attempting to intimidate witnesses or obstruction of justice. But at this point, Trump doesn't care. He's also gone so far as to tell Republican senators who are up for re-election that he'll support them only if they promise not to vote to convict him when the impeachment trial inevitably moves to the Senate. Bribing witnesses they call it.

Of course, in the ever-chaotic world that is Trump in charge, there was also the abandonment of the Kurds in Syria, pulling out U.S. troops without consulting his generals, insisting later that our troops were staying to protect Syrian oil (which is virtually non-existent), turning the killing of the Isis leader into another self-aggrandizing moment and thanking Russia and Syria for their help before mentioning U.S. troops who did the job, getting booed at a World Series game in Washington, D.C. (his staff had to know this would happen or they have become as delusional as he), and threatening to cut off federal aid to California, which is fighting devastating forest fires, because he doesn't like the Democratic governor and the state voted for Hillary Clinton in 2016.

This last bit of Trumpian unraveling put Californian Kevin McCarthy, House minority leader and the top Republican in that body, in the delicate position of having to defend a man who was willing to let McCarthy's home state be consumed by flames because the man was consumed by pride, anger and fear.

But McCarthy, a true Trump trooper, grasping at strands, kept silent. After all, he would need Trump's support from those California Republicans who fear what would happen if he were removed.

In what would be considered the last strand for anyone else, Trump also announced that prosperity evangelist Paula White, described by some as his longtime personal pastor and by others as an opportunistic blonde con artist, had taken a position with the Office of Public Liaison as advisor to the president's Faith and Opportunity Initiative. Let us all pray. Kneel if you wish. Send cash.

Related Topic(s): Anger; Arrogance; Congress; Democrats; Diplomacy; Extortion; God; Impeachment; Presidency; Republican; (more...) Senate; Subpoena; Syria; Traitors; Trump; Ukraine; Whistleblower, Add Tags  (less...)
Add to My Group(s)
Go To Commenting
The views expressed herein are the sole responsibility of the author and do not necessarily reflect those of this website or its editors.