Trump's most famous campaign promise, "Build the Wall and Mexico Will Pay for It," was never about a Wall, per se. Trump is so disinterested in any kind of real Wall, that he doesn't even know: a) how much of one there already is, b) how many other kinds of other barriers there already are, c) how many miles of the Mexico/U.S. border are either virtually impossible or prohibitively expensive to build on, d) that El Paso is one of the safer cities in the U.S., e) that there is a difference between Latino workers coming to find jobs that are being offered by U.S. employers at below U.S.-worker wages (and such workers would not be coming if such jobs were not being offered by, let's say, Trump-owned resorts) and refugee/asylum seekers, seeking to enter under the provision of U.S. and International law (about which Trump obviously knows nothing). And so on and so forth.

So, if it's not about the Wall, per se, what is it about? (Let me say here that I know I am not telling the politically and Trump-ily aware folks in the U.S. [and indeed around the world] anything most of you don't already know. But I thought that it might be helpful to put it all in one place.) First and foremost, and this is very well-known, talked about far and wide, from the advertising master Donny Deutsch on MSNBC to the economics master Paul Krugman in The New York Times, it is about Trump's most valuable winning card: racism. As is well-known, Trump began his campaign for the Presidency not when he descended the golden escalator in 2015, but when he jumped up the birtherism movement in 2011. Then on the escalator he broadened the racist message from African-Americans to Latinos, specifically in the beginning to Mexicans.

The "drugs-rapists-criminals-gangs" message has only been intensified in recent months, as the fight over wall money has itself intensified. But it did not have to, for the first two years of the Trump Presidency. In fact, it might be speculated that a reason that Trump did not seriously go for some significant sum of Wall money when he had the whole of the Congress is a sign that indeed the Wall per se is not the issue. For, and it is what I am speculating here, that what Trump wants is not a Wall, but the Wall-issue, as the symbol of his racism that is, for a significant portion (but not all) of his base, his most important characteristic. 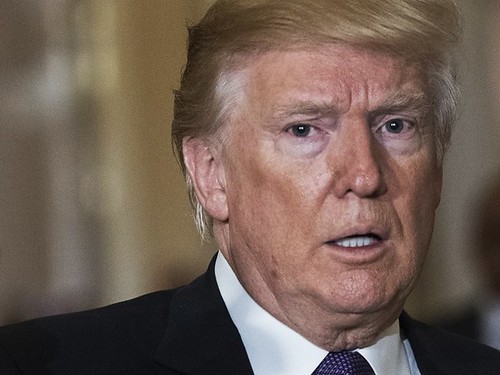 Trump Fears Next Election Will Be Decided by Americans.
(Image by nordique)   Details   DMCA

As Trump turns towards 2020, what else precisely does he have to run on? The tax-cut has clearly gone to the rich and the large corporations (which are, among other things, as predicted buying back tons of their own stock). The outcomes of the Steve Bannon "deconstruction of the Administrative state," are more commonly known as the less-threatening "deregulation." But with Trumpite policy it actually goes much deeper than that. The results have yet to be felt widely among the general public, but all of their negative outcomes gradually will become widely recognized. For the Radical Religious Right he is remaking the Federal Court system so that the widely hoped-for overturning of Roe v. Wade, Obergefell, and numbers of other hoped-fors of that grouping may well occur.

BUT, he has hardly "drained the swamp." Indeed, Washington has become swampier. There is no infra-structure package. His foreign policy, to the extent there is a coordinated one, makes no sense and is irrelevant to the lives of the average Trump voter, except that the prices of certain goods are already going up, with his tariffs. So what has he got? He's got racism. And the Wall is its symbol. And Trump wants to carry it as far into the future as he possibly can, that is at least until the 2020 election. It is no coincidence that in his combative interview with Chris Wallace of Fox"News" the far-right xenophobe in charge of White House immigration policy, Steven Miller, actually said that with the appropriated money plus what Trump's "national emergency" would pull from other parts of the government, mainly the military (for non-military purposes like schools and health care facilities), the "planned" Wall (and one must put that word in quotes because there is obviously no physical plan for the Wall) would be ready by when? By September 2020, of course. That date, two months before the election has to be purely coincidental, doncha think?

And do notice the new slogan. "Build the Wall" has been replaced by "Finish the Wall." The latter is, of course, a never-ending process, just the kind of issue that Trump wants, now, as President, and then after he is no longer President, by one route or another, and he will be leading his own fascist party. And with "Finish the Wall," whether in or out of power, he will always have the issue, because given the legal, physical, and financial issues involved in building one from "sea to shining sea" there never will be one. 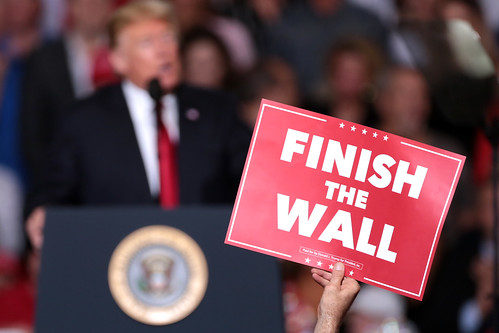 Get used to it. .Build the wall. signs will be found only on junk heaps.
(Image by Gage Skidmore)   Details   DMCA

Finally, it is the Wall that has given him currently an opening to continue his drive towards dictatorship, the so-called "National Emergency," that even he himself, in that lie-filled news conference when he announced his initiative on it, denied it was an emergency. This is perhaps his most important objective for the "Wall"-campaign. To use it, in one way or another," to establish a precedent for the establishment of a Unitary Presidency, not subject to the "checks and balances" that exist, for the most part, in traditional U.S. Constitutional government. He is increasingly surrounded by people who either want to go in this direction, like Steven Miller, or would likely tolerate going in this direction with a bit of "Constitutional" decoration here and there, like the new Attorney General, Will Barr. 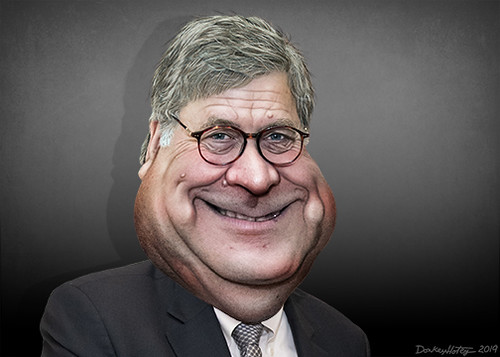 William Barr: Why is this man smiling?
(Image by DonkeyHotey)   Details   DMCA

(By the way, here is what I said about Barr in a recent tweet (at tter.com/tpjmagazine): washingtonpost.com/world/national -security/justice-department-preparing-for-mueller-report-in-coming-days/2019/02/20/c472691c-354b-11e9-af5b-b51b7ff322e9_story.html?utm_term=.879da981d22e&wpisrc=nl_most&wpmm=1 ". A.G. Barr chosen by Trump for one reason: to cover-up/squash Mueller Rep., with possibly a bland summary issued. Full Rep. will then be subpoenaed by House Dems. Case will go to Supreme Court. John Roberts will become the single most powerful man in U.S.)

John Roberts - Caricature. Well at least this man has been around for a while. But once the Trumpites march up the Supreme Court steps, will he be able to keep that smile on his face?
(Image by DonkeyHotey)   Details   DMCA

Since the elected Repubs. in the Congress are for the most part Trump-supporters, the case for the "national emergency" and "building a Wall to deal with it," will go to the Supreme Court. As I indicated in the tweet just above, the swing vote in the Court now belongs to, OMG, Chief Justice John Roberts. It is he who will be deciding whether the U.S. is going to start down the literal fascist road under Trump, or not. As I said (just above), John Roberts is about to become the single most powerful man in the U.S. And if he rules in Trump's favor, and the Trumpites are capable enough of continuing to move in the fascist direction, Roberts, as noted, as the enabler, will become one of the half-dozen or so most significant figures in U.S. history.

Steven Jonas, MD, MPH, MS is a Professor Emeritus of Preventive Medicine at StonyBrookMedicine (NY) and author/co-author/editor/co-editor of over 35 books. In addition to his position on OpEdNews as a "Trusted Author," he is a Senior Editor, (more...)
Related Topic(s): Birtherism; Election; Far-right; Fascist; Immigration; Initiative; Krugman; Policy; Presidency; President; (more...) Racism; Symbol, Add Tags  (less...)
Add to My Group(s)
Go To Commenting
The views expressed herein are the sole responsibility of the author and do not necessarily reflect those of this website or its editors.