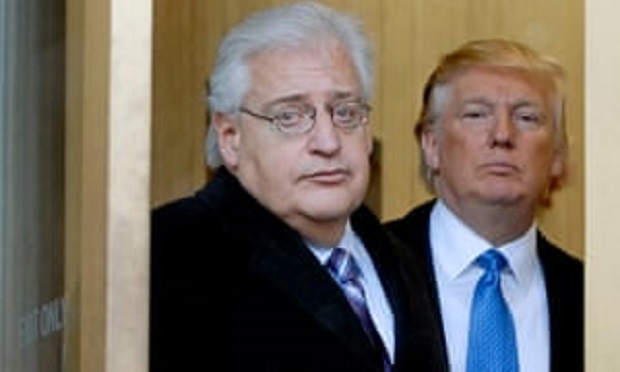 By Donald Trump's own admission and through documents provided by an Intelligence Community whistleblower and former U.S. special envoy for Ukraine Paul Volker it is known that the Trump administration pressured at least four countries to dig up dirt on former Vice President Joe Biden and his son, Hunter Biden. The countries identified as being involved in the Trump operation thus far are Ukraine, the United Kingdom, Australia, and China. The attack on the Democratic Party's leading presidential candidate in 2020 is far worse than that carried out by Richard Nixon henchmen G. Gordon Liddy, E. Howard Hunt, Donald Segretti, and Charles Colson in the Watergate scandal and events surrounding it.

It is also known that Attorney General William Barr enlisted the help of Italy in pursuing information to discredit the investigation of former Justice Department Special Counsel Robert Mueller in Russia's involvement in the 2016 election. Now comes word that Trump's ambassador to Israel, David Friedman, was likely involved in an operation that enlisted Israeli Prime Minister Binyamin Netanyahu and a Ukrainian-Israeli oligarch with Cypriot citizenship, Ihor Kolomoisky, to pressure Ukrainian President Volodymyr Zelensky to agree to dig up political dirt on the Bidens. It was U.S. ambassador to Ukraine Marie Yovanovitch's refusal to facilitate Rudolph Giuliani's tainted opposition research operations in Ukraine that earned her being fired by Trump in May. Trump faced no such hurdles with Friedman, his one-time bankruptcy lawyer with the New York firm Kasowitz, Benson, Torres & Friedman.

Kolomoisky has close links to Brighton Beach, Brooklyn Russian Jewish organized crime figure Semyon "Sam" Kislin. Kislin, who owned an electronics store in Brooklyn, first met Trump in 1976. Kislin also provided televisions to Trump's hotel projects. Kilsin was also instrumental in connecting Russian Jewish mob figures to the Trump Organization. The mobsters discovered that Trump was more than amenable to them purchasing his condominium units in order to launder ill-gotten gains from the Soviet Union and, after its collapse, Russia and the other newly-independent republics of the former USSR.

Kislin has been a major fundraiser of Giuliani's mayoral and failed U.S. Senate campaigns. After years of being barred from entering Ukraine, Kislin's ban was lifted as soon as Zelensky, a television comedian, was inaugurated president. Zelensky, like Kislin, is Jewish. Kislin is also fond of telling his compatriots in Ukraine that Trump is "my president," which in mob-speak means he "owns" Trump, just like he "owns" Giuliani.

U.S. House investigators are pursuing leads that Netanyahu, who was in Ukraine on August 19 to help commemorate the Nazi massacre of Ukrainian Jews at Babi Yar, secretly met with both Kislin and Kolomoisky. Netanyahu also had a separate meeting with Zelensky to ink a Ukrainian-Israeli free trade agreement. Kislin also met with Ivan Bakanov, the head of the Ukrainian Security Service (SBU). There are reports in Ukraine and Israel that Bakanov, who is a childhood friend of Zelensky and is married to a Russian citizen, is the eyes and ears of Russian President Vladimir Putin inside the Ukrainian government. A week before Israel's September 17 election, Netanyahu suddenly decided to fly to Sochi on the Black Sea to meet with Putin. It is believed they discussed a possible Putin-Zelensky summit in Israel. It is interesting that in their July 25 phone call, Trump told Zelensky to patch things up with Russia.

Zelensky surprised everyone when he agreed to the Steinmeier Formula, named after then-German Foreign Minister Walter Steinmeier. Under the agreement, Ukraine began withdrawing forces, including foreign mercenaries, from the civil war front in the majority Russian-speaking eastern Donbass region and Russia agreed to withdraw its forces. Under the formula, free and fair elections are to take place in eastern Ukraine and Ukrainian officers will re-occupy border crossings with Russia. Zelensky's agreeing to the Steinmeier Formula and his phone call with Trump have earned him the nickname of "Monica Zelensky" among Ukrainian nationalist circles.

Netanyahu reportedly pressured Kislin and Kolomoisky to lean on Zelensky and assist Giuliani in coming up with dirt on the Bidens. Kislin was also in Kiev to pressure Zelensky to bring criminal charges against former Ukrainian President Petro Poroshenko. In recent comments, Poroshenko confirmed that there was no pressure exerted by former Vice President Biden for the Poroshenko administration to cease investigating Burisma Holdings, a natural gas company on whose board Hunter Biden served as a member.

Kolomoisky, who had a major financial stake in Burisma Holdings, wants the Barr Justice Department to drop a money laundering investigation against him. In return, Kolomoisky convinced his friend, the corrupt former Prosecutor General of Ukraine, Viktor Shokin, to provide Giuliani with fabricated documents to tarnish the Bidens. It was Shokin who Vice President Biden, the European Union, the European Bank for Reconstruction and Development, and International Monetary Fund wanted fired by Poroshenko for his corruption and mob links. Of particular concern was Shokin's links to Kolomoisky's operations, including Burisma Holdings. Shokin ordered the Burisma investigation to go cold as a favor to Kolomoisky.

Kolomoisky and his partner, Gennady Bogolyubov, owned Ukraine's PrivatBank, which is currently the subject of a civil Racketeer-Influenced and Corrupt Organization (RICO) suit in Delaware. The two are accused of using a network of shell companies in the Cayman Islands, British Virgin Islands, Delaware, New Jersey, and Ohio to defraud clients. The case also involves three residents of Miami, Mordechai Korf, Uriel Laber, and Chaim Schochet. Kolomoisky not only wants the case tossed out but he wants a payback for Poroshenko, who ordered the bank nationalized amid the fraud scandal.

The RICO suit contains valuable background information on Kolomoisky and his criminal network that includes President Zelensky: "Defendant Igor Valeryevich Kolomoisky ("Kolomoisky") is a billionaire businessman and 'oligarch' who was born in Ukraine and is reputed to hold Ukrainian, Israeli, and Cypriot citizenship, as well as Swiss residence.

Kolomoisky lived for several years in Geneva, Switzerland, before reportedly fleeing Switzerland for Israel in late 2018 due to his fear of an ongoing FBI/DOJ investigation into his activities (believing that he would be safer there from the reach of the United States government). Kolomoisky is now reported to have made a return to Ukraine for the first time in several years, a decision which is believed to be linked to the recent victory in the Ukrainian presidential election of the television star and comedian Mr. Volodymyr Zelenskiy, behind whom Kolomoisky is widely reported as being the principal power and financial backer.5 Press reports speculate that there is a deal between Mr. Kolomoisky and Mr. Zelenskiy: in exchange for Kolomoisky's support, Mr. Zelenskiy will ensure the return of PrivatBank to the ownership of Mr. Kolomoisky in order to circumvent any pending or threatened litigation against Kolomoisky."

In addition, the suit includes information on Bogolyubov: "Defendant Gennadiy Borisovich Bogolyubov ("Bogolyubov") is a billionaire businessman and 'oligarch' who was born in Ukraine and is reputed to hold Ukrainian, Israeli, and Cypriot citizenships. As with Mr. Kolomoisky, Mr. Bogolyubov also has Swiss residence, but also reportedly fled from Switzerland to Israel in late 2018 for fear of an ongoing FBI/DOJ investigation. Bogolyubov is also reported to have made a return to Ukraine "just days before Kolomoisky."

The RICO suit against Kolomoisky and his enterprise is very similar to the series of indictments brought by the Justice Department against Paul Manafort and his partner, Rick Gates. Offshore companies in Cyprus also figured prominently in both. The FBI once had in its top leadership an agent who cut his teeth on investigating the Russian Jewish mob in New York, especially Brighton Beach. He is former acting FBI Director Andrew McCabe, a personal target of Trump and his team of mobsters, who was fired just hours prior to his being able to retire with a pension. A rare runaway grand jury in Washington refused to indict McCabe even though it was under intense pressure from Barr and other Trump cronies inside the Justice Department and U.S. Attorney's Office for the District of Columbia.