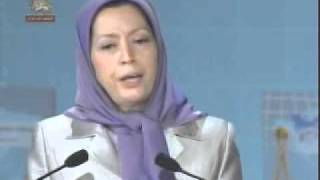 John Bolton's ascent to one of the most important positions in government and Donald Trump's decision to withdraw from the Joint Comprehensive Plan of Action (JCPOA), or Iran nuclear deal, have allowed an avowed terrorist group -- and its cult-like leader -- to take on a position of authority in Washington and in American foreign policy. The Mujahedin e-Khalq (MEK), or People's Mujahedin Organization of Iran, has a long history of terrorism, of murder, and of attacks on civilians. But its chief Washington lobbyist, John Bolton, is seeing to it that the MEK will be the go-to-organization in the event that "regime change" comes to Tehran. That in and of itself is a crime.

The MEK is as much a cult as it is a terrorist group. It was created in 1965 by a husband and wife team, Massoud and Miryam Rajavi. They combined Islamism with Marxism and helped to overthrow the Shah of Iran, carrying out bombings and terrorist attacks in Tehran for nearly 15 years, including against Americans. In November 1970, the group attempted and failed to kidnap Douglas MacArthur II, the US ambassador to Iran, and in 1972, they assassinated US Air Force Brigadier General Harold Price. The MEK was reportedly the first group ever to use an improvised explosive device.

The MEK supported the Ayatollah Khomeini and the takeover of the US Embassy in Tehran in 1979, but they split with the regime because their personalized brand of violent Marxism didn't fit in the new Shia Muslim theocracy. The Rajavis, along with their 5,000-member "National Liberation Army," the MEK's military wing, finally fled to Saddam Hussein's Iraq in 1981. They were the perfect propaganda tools for Saddam, and he provided them with money, weapons, safe haven, and a military base along the border with Iran so that they could attack Iranian villages, border guards, and soldiers and then retreat to the safety of Iraqi territory.

Rank-and-file Iranians, including leftists, came to regard the Rajavis as traitors because of their alliance with Saddam and because of news reports that Massoud Rajavi had personally identified Iranian targets for the Iraqi military to attack and because MEK operatives would slip into Tehran and carry out assassinations. Indeed, the Rajavis murdered Iranian brigadier general Ali Sayyad Shirazi on the front steps of his home in 1999.

And that is the basis of the American political right's love affair with the MEK.

Massoud Rajavi disappeared in Iraq in 2003 and has not been seen or heard from since. Miryam immediately assumed leadership and, upon Saddam's overthrow, surrendered to US forces. It was her hatred of the Iranian government that made her an attractive propaganda figure to the likes of John Bolton, then serving as George W. Bush's Undersecretary of State for International Security.

Never mind that Miryam had been charged with crimes against humanity for her role in Saddam's massacre of Shia Muslims in southern Iraq in 1991. Never mind that she had actively sought -- and carried out -- the assassinations of American officials in Iran. Never mind that the MEK was on the State Department's list of terrorist groups, as well as terrorist lists in the European Union and at the United Nations. John Bolton decided that they should be rehabilitated and that the group should be represented in Washington.

This wasn't just John Bolton's position, borne of his hatred of all things Iranian. It was also part of Miryam Rajavi's forward-looking policies. She understood that anyone and anything in Washington could be purchased. And so she hired lobbyists.

The first order of business was getting the MEK off the terrorist list. Lobbyists Joe DiGenova (Ronald Reagan's former US attorney for the Southern District of New York), the giant international law firm of Akin Gump Strauss Hauer & Feld and, yes, John Bolton worked the issue. They succeeded, and the MEK was taken off the list in 2012. It reportedly cost the group millions of dollars.

This is emblematic of everything that stinks in Washington. It's all about the money. Everybody at the upper levels of government eventually gets rich. That's always the plan. Do your time making $160,000 a year in some federal position and then cash in, even if you have to get in bed with terrorists. It's a bipartisan play.

Bolton is making it worse, though. It's not just about the money for him. Sure, the MEK helped to make him rich. But he wants something more. He wants to overthrow the Iranian government and install Miryam Rajavi as its new leader. We've already seen the first step in that direction. Donald Trump withdrew from the JCPOA and ramped up the rhetoric against the Iranian government. He's doing Benjamin Netanyahu's bidding here, all with the full support of the royal families of Saudi Arabia, Bahrain, and the United Arab Emirates. That's always been the plan for all of them.

Related Topic(s): Iran; Iraq; John Bolton Warmonger; MEK; Miryam Rajavi; Terrorism, Add Tags
Add to My Group(s)
Go To Commenting
The views expressed herein are the sole responsibility of the author and do not necessarily reflect those of this website or its editors.