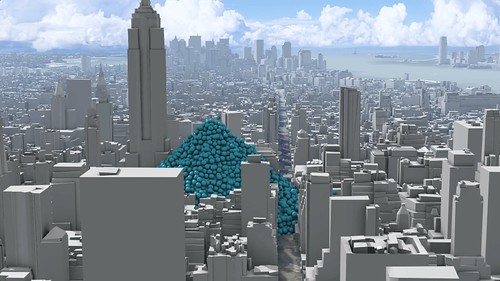 The traditional meaning of 'sacrifice' is "an act of offering to a deity something precious; especially:the killing of a victim on an altar." From this we get the more general meaning of giving up something of value to get something else. The 'something else' that capitalist governments always want is economic growth. The god on whose altar Trump's EPA will sacrifice thousands of lives is the Gross Domestic Product--the sum of the prices of all final goods and services produced in an economy during a period of time. In capitalist theology, the more we give up to this deity, the more abundance it confers on us.

To appreciate the cruelty of this hoax, keep in mind the difference between maximizing GDP and maximizing profits (which is the real goal of sacrifice zones). The dollar value of the GDP is a national income that gets distributed in different proportions to government as corporate taxes, to workers as compensation and to corporations as profits. Since the 1980s there has been a substantial decline in the share of national income going to workers and to government.

In other words, since the 1980s 'growing the economy' (a favorite Clinton phrase) has been all about growing corporate profits at the expense of worker compensation and the social programs funded by taxation. Trump's huge tax cuts for corporations are the latest example of this trend. According to Americans for Tax Fairness, corporations are not using their tax windfall to invest in production and create jobs. Instead, they "are spending 101 times as much on stock buybacks as they are spending on workers' bonuses and wages." These buybacks increase the value of stocks: "The richest 1% own 40% of all stock; the richest 10% own 84%."

The expanding sacrifice zone needed to maintain our soaring economic inequality includes stagnant wages for most workers, cuts in social programs, and the kind of environmental degradation created by burning coal and other fossil fuels.

As Hedges and Sacco point out, in a sacrifice zone humans and the natural world are treated with the same disrespect, valued only for their profit potential and discarded as worthless once this potential has been extracted. In a society shaped by the capitalist value system, when people and the places they live in lose their market value, they become junk. Appalachia is one of America's lingering sacrifice zones. In the words of Dave Pruett, "Big Coal has plundered thousands of seams, ripped the tops off 500 mountains, extracted the land's wealth, poisoned its streams and rivers, and left the people destitute."

Following the lead of the Republican governors of Kansas and Oklahoma, Governor Bobby Jindal delivered a strong dose of capitalist religion to Louisiana, and turned it into a sacrifice zone. He justified his drastic tax cuts by claiming that rising corporate profits would bring greater prosperity. What he got instead were crippling deficits, gutted social programs and underfunded education budgets. As Nathaniel Rich reports in The New York Review of Books (11/10/16), Jindal stripped his state to make up for a $1.6 billion deficit: he "fired 30,000 state employees, furloughed many others, cut education funding by nearly half, and sold off as many state-owned parking lots, farms, and hospitals as he could."

In addition to being victimized by Jindal and the state's GOP, Louisiana is also one of the early casualties of a growing global sacrifice zone. With each passing hour the Gulf of Mexico claims the equivalent of a football field of land from the Louisiana coastal wetlands. The sea level is rising inexorably because of global warming, and coastal areas in this country and around the world are being inundated by salt water and damaging storm surges.

As any non-Republican adult knows, global warming is caused by the burning of fossil fuels which crams the atmosphere with carbon and other heat-trapping gases. Eighty percent of the world's energy comes from fossil fuels. Global warming and sea-level rise are accelerating rather than increasing at a steady rate.

We're getting a taste of out future in the increasing frequency, size and duration of wildfires in California and around the world . Heat waves are getting longer and more intense worldwide . A recent World Bank study warns that 800 million people in South Asia will be at risk of serious health effects from rising temperatures by 2050. The cult of endless GDP growth is hurrying Earth toward a catastrophic decline in living conditions for humans and other species.

Capitalist religion's burnt offerings of coal, oil and gas are creating a global sacrifice zone in which most people will be unable to purchase refuge in increasingly scarce comfortable locales. According to Oxfam , "Last year, 82% of wealth created worldwide went to the top 1%. The poorest half saw no increase at all." In the American fusion of Christianity and capitalism, these one-percenters will find validation in the plight of those who can't afford to live well in the sacrifice zone, since their poverty is a symptom of deficient character. One-percenters will be like the saints in heaven who, according to St. Thomas Aquinas, will be allowed to see the sufferings of the damned "in order that the happiness of the saints may be more delightful to them" (Summa Theologica ).

As Naomi Klein explains in her important book This Changes Everything: Capitalism VS the Climate, we are blocked from saving ourselves by the capitalist dogma that government is to be avoided as much as possible. What we now need is government intervention in the economy on the scale we accepted at the onset of WWII.

Related Topic(s): Capitalism; Climate; Corporate; Corporations; Corporations; Economy; Energy; Future; Government; Health; (more...) Religion; Republican; Sacrifice; World Issues; Worldwide, Add Tags  (less...)
Add to My Group(s)
Go To Commenting
The views expressed herein are the sole responsibility of the author and do not necessarily reflect those of this website or its editors.