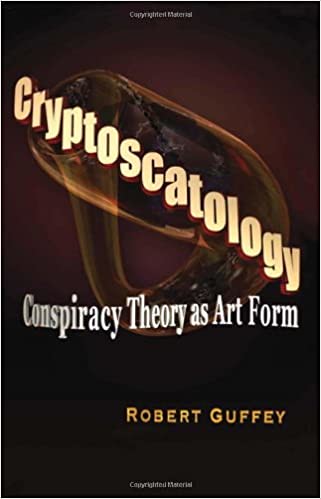 Robert Guffey is a lecturer in the Department of English at California State University - Long Beach. His most recent books are Widow of the Amputation and Other Weird Crimes (Eraserhead Press, 2021), a collection of four novellas, and a novel entitled Bela Lugosi's Dead (Crossroad Press, 2021). 2017 marked the publication of Until the Last Dog Dies (Night Shade/Skyhorse), a darkly satirical novel about a young stand-up comedian who must adapt as best he can to an apocalyptic virus that destroys only the humor centers of the brain. His previous books include the journalistic memoir Chameleo: A Strange But True Story of Invisible Spies, Heroin Addiction, and Homeland Security (OR Books, 2015), which Flavorwire has called, "By many miles, the weirdest and funniest book of [the year]." His first book of nonfiction, Cryptoscatalogy: Conspiracy Theory as Art Form, was published in 2012.

More recently, Guffey has been involved with trying to decode and comprehend the phenomenon known as QAnon, an oddity which seems to fall under his bailiwick. Guffey has a unique take, treating its myriad emerging characters as akin to fantasy figures who live somewhere between reality and the Twilight Zone. Last August, he published a 5-part series on the origins of QAnon in Salon, and, more recently, he has a follow-on 4-part series on the movement in Evergreen magazine titled, "If You're Into Eating Children's Brains, You've Got a Four-Year Free Ride: A QAnon Bedtime Story.

I reviewed Guffey's Chameleon back in 2015 and had a follow-up interview. Here is my second interview with Guffey on June 29, 2021.

Robert, you've written quite a number of books with unusual subject matter. I'm tempted to refer to them as your takes on unidentifiable alienating phenomena (UAP). I reviewed Chameleo shortly after it came out and was wowed. Invisible and, I daresay, inexplicable spies in proximity swarming to a character that vaguely reminded of Jesse Pinkman of Breaking Bad, hepped up on the blue persuasion. The paranoia of Homeland insecurity. Looking out windows to phantasmagorical cosmic landscapes. What the f*ck, Robert? You said it was a "true story." But you know what, Robert, now that we're in a world of crazies pouring out of the woodwork with their fractal personalities and holding "insurrections" and disrupting the presidential Electoral College tally and making off with Nancy's podium dressed in what would be drag, if you were an antelope -- your work is just starting to hit home. Are you some kind of seer?

In March of 2020, I was talking to an older friend of mine who lives in the Midwest, who I've known for a long time. He started talking to me about QAnon. I had known about QAnon previously, when it first cropped up in October, 2017. But I didn't really pay much attention to it. But [my friend] was not only giving credence to it, but really sort of believing in it in a weirdly non-critical way that I found fascinating. And so when he started sending me links and I started going deep into the rabbit hole, actually looking at the stuff, and having studied conspiracy theories in the early '90s, and even earlier, I immediately recognized the source material. When I went around to, say, the Atlantic Monthly, or some of the very few mainstream news sources that were reporting on it, I just got the sense that the journalists were kind of tongue-tied and a little baffled, not quite sure how to write about it.

Q would link to the story and say, 'See how they're getting everything wrong.' And indeed, sometimes they would get things wrong in terms of their interpretation. And so that just fueled the fire of QAnon people looking at it and calling it Fake News. That was the main reason I started writing about QAnon; it seemed to me that the Q people who read my article would at least be able to recognize the fact that I knew what I was talking about and might actually give some attention to it. Then I wrote a new piece for The Evergreen Review, "Donald Trump's Operation Mindfuck, " as a follow-up to my Salon series.

At the beginning of Part 1 of your Evergreen series you do an excellent job summing up the prevailing mindset of QAnon membership:

They call themselves "red-pilled," drawing upon the terminology of The Matrix. In QAnon-speak, to "red-pill" is to accept as unassailable truth the conspiracy theory that occultists are ruling the world from behind the scenes by eating the brains of children and that Donald Trump is the only man who can save us from this evil cabal, while to "blue-pill" is to align yourself with the Democratic Party and become "sheeple" who believe only what mainstream newscasters and scientists tell you is true...these "Christian Patriots" have embraced-as the central metaphor of their new religion-a science fictional concept created over twenty years ago by two transgender women. "Cognitive Dissonance" doesn't even begin to describe the confused state of mind with which these people must wrestle on a daily basis.

Nice. Cognitive dissonance. The Pizzagate they embrace sounds like a bad group-read of two Stephen King novels -- It, with the soul-wounded gutter clown who nabs kids, and 11.22.63, with that secret portal inside the restaurant, leading to the mother of all modern conspiracy theories. Mm-mm.

You know, there seems to be a kind of weird psychosexual kinkiness at play in some of these QAnon and Proud Boy types. Transgenders. And the Proud Boys, with their name that's derived from a song deleted from Disney's Aladdin that sees an abused, traumatized Mama's boy promising to make Mama proud if she'll just give him one more chance. So this song ruined the Aladdin vibe and was removed. The Boys had to settle for rubbing their magic lamps until bada-boom the January 6 genie arrived. Sometimes you see this stuff play out and you wonder if you ever came out of that acid trip you took after Jimi died.

Related Topic(s): Conspiracy; Conspiracy; Interviews; Qanon; Theories, Add Tags
Add to My Group(s)
Go To Commenting
The views expressed herein are the sole responsibility of the author and do not necessarily reflect those of this website or its editors.

STAY IN THE KNOW
If you've enjoyed this, sign up for our daily or weekly newsletter to get lots of great progressive content.
Series: "Podcasts and Video Interviews"