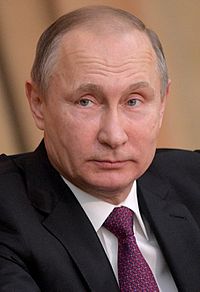 Many American pundits and politicians have referred to Vladimir Putin as a nationalist. This has always been a disingenuous characterization of the Russian president to anyone who has studied him carefully over the years. Putin is more what could be termed a sovereigntist. He believes unequivocally in national sovereignty and in Russia's right to be an independent nation that freely makes its own decisions in its perceived interests - engaging in multilateralism when appropriate, but as a respected equal. This is not nationalism in the commonly understood meaning of the word, which connotes a form of national chauvinism - the idea that a country (or ethnic group) is superior to others and has the right to do what it wants at anyone else's expense. I have never heard Putin say anything that suggests this kind of ideology, unless he's being quoted out of context, which happens frequently in the western press. Moreover, there are real nationalist politicians in Russia, namely Vladimir Zhirinovsky, leader of the LDPR Party and one of the more popular opposition politicians. One can get an idea of some of his more outlandish ideas here - including support for monarchy and denigrating diplomacy.

In an interview with Oliver Stone in June of 2019, Putin specifically gave his opinion of nationalism:

Vladimir Putin: In general nationalism is a sign of narrow-mindedness.

Within the context of domestic Russian politics, Putin is a moderate. He sees himself as a Russian patriot and pragmatist whose top priorities are the security and stability of Russia as well as improving Russians' living standards. Anyone who has an understanding of Russian geography and history immediately comprehends these priorities and why they resonate with the Russian people, who overwhelmingly believe that Putin, whatever his flaws, took a country that was literally on the verge of being a failed state in 2000 and turned it around. In order to keep the country together after the disaster of the 1990s, it was necessary to foster social cohesion. Consequently, Putin encouraged the trend, already underway, of the re-discovery of Russia's pre-Soviet cultural heritage, with the Orthodox Church playing a significant role and Russians' cultural conservatism acknowledged. All this reflected the need to emphasize boundaries, rootedness and order in the search for stability after the chaotic Yeltsin era that plunged the nation into massive poverty, crime and its worst mortality crisis since World War II. There is also a strong sense of duty and loyalty that Putin personally values. These qualities have made him attractive to some western conservatives, despite the fact that in many ways Putin is a statist as is fitting with Russia's long political history, which does not include the libertarianism that a large segment of American conservatives have traditionally embraced. Conversely, Putin's cultural conservatism has been weaponized by liberal Democrats, especially as it pertains to gay rights. Ironically, this obscures the fact that Putin's actual record shows a leader with a more nuanced and moderate socio-political view as he's overseen the expansion of individual rights for Russians within the justice system and opposes reinstitution of the death penalty. Meanwhile Russian women enjoy maternity and child benefits that American women could only dream of.

In an interview with Rossiya 1 on May 17th, Putin stated that Russia - a country straddling two continents and 11 time zones - was more its own civilization than just a country. He also said that, while Russia may borrow useful ideas from others, it would retain its own independent path and had the ability to develop technologically in its own manner. Considering that Putin has characterized Russia as a European country in the past and has reportedly had a portrait of Peter the Great - the great westernizer - hanging in his office, it's likely that these recent comments were intended to signify geopolitical inclinations rather than a major domestic cultural shift. Putin is signaling that after all of the failed attempts at a partnership - or at least a modus vivendi - with the west in the post-Cold War era, only to be met with abrogation of treaties as well as expansion of NATO and other provocations on its borders, it will not grovel for acceptance.

Putin's comments also indicate that Russia does not see itself as, nor would it allow itself to be, the "junior partner" in its relationship with China as many western commentators have suggested. A nation that has developed some of the most advanced weaponry on the planet, rockets so sophisticated that the U.S. still remains

It also seems that Moscow has no intention of escalating its relationship with its Asian neighbor from that of a strategic partnership to a full-blown alliance. On behalf of its top priorities, Russia will seek to maintain good relations with its formidable neighbor as well as pursue the economic opportunities of China's Belt and Road Initiative and other development projects. However, Moscow has no desire to be sucked directly into a conflict between the U.S. and China who are increasingly at odds with each other. Russians, however, do not see this as a zero-sum game. They also want to maintain economic exchange and restore normal diplomatic relations with the west, particularly the EU.

If there were more rational foreign-policy advocates with influence in Washington, it would be recognized that Russia could serve as a potential mediator or backchannel for de-escalation with China due to its more sophisticated understanding of the country and its talented diplomatic corps.

To be clear, Russia will not be lured into a partnership with Washington at the expense of its relationship with China. This would not be in Russia's security or economic interests and the U.S. has broken too many agreements for Moscow to trust any such realignment in the foreseeable future. However, Russia could be courted as a possible bridge between east and west while it maintains a healthy independence from both.

Natylie Baldwin is author of "The View from Moscow: Understanding Russia and U.S.-Russia Relations," available in e-book and print . She is co-author of "Ukraine: Zbig's Grand Chessboard & How the West Was Checkmated." She has traveled throughout western Russia since 2015 and has written several articles based on her conversations and interviews with a cross-section of Russians. She blogs at http://natyliesbaldwin.com/ Twitter: @natyliesb.

Related Topic(s): China Russia Alliance; Conservatism; Nationalism; Nationalist Politics; Russia; Russia And China; Russia And Us Conflict; Russia-china; Russian Diplomacy; Russian Economy; (more...) Russian Foreign Policy; Russian Orthodoxy; Vladimir Putin, Add Tags  (less...)
Add to My Group(s)
Go To Commenting
The views expressed herein are the sole responsibility of the author and do not necessarily reflect those of this website or its editors.