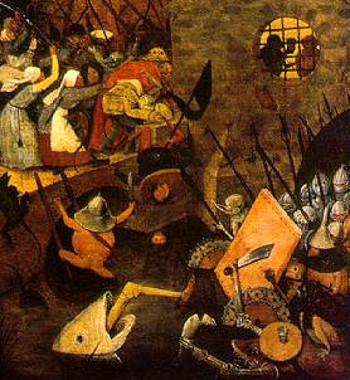 Those who argue for a pessimistic view of life point toward death and physical suffering as the two biggest factors that throw the balance into the negative ledger. If life is, in fact, dependably, more pain than gain then why bother? Schopenhauer's recommendation that suicide be considered looks quite reasonable. Why should there be any creation at all?

My wife and I were watching a documentary on oceans yesterday. The documentary included the infamous scene where baby turtles were hatching out on the beach. We watched them dash to the sea - a scene in which most of the cute little buggers were eaten by birds before they made it to the water for their first swim. That's pretty convincing footage. This will serve as exhibit "a" for the Schopenhauer / Buddhist / wheel of suffering view of things.

The baby turtle issue has political significance. If we take this as convincing evidence that creation is simply a pain factory, no motivation remains for political action of any sort. The only rational response is to try to extricate oneself from the wheel of suffering through suicide, drugs or spiritual practice. From this perspective, spiritual practice would be understood as escaping from the world - not transforming it. A pain factory is not a place where one can hope for the realization of values.

If one stops to reflect on it, one realizes that the baby turtles are by no means the only example of the indifference of the creator to the amount of death and suffering that is required to produce just a few successful individuals. I was inspired to write a poem about it, which you can read, here. It might surprise you just how common this sort of thing it.

So let's have a look at the first major argument against creation as a place where one can reasonably hope to have an existence that is more gain than pain. Death. Death is the enemy - the ultimate negation of all our efforts. The entire (huge) medical establishment exists to battle it.

All our firm convictions about death -- both positive and negative -- are grounded on metaphysical guesswork. It's the the kind of thing the Buddha cautioned us against. But being, as most who know me would agree, less wise than either the Buddha or your average angel, I will rush in and ask: is death really so bad?

First it might be a good thing to look at the evidence we do have: people who have died and returned. I have talked with three people who returned with something to tell, and read many accounts. The general consensus can be summed up simply: death is great. It's a matter of being bathed in a warm loving light. Well, if a nurse came into my little examining room and said, "You need to prepare yourself, Mister Hunter. We're going to need to bathe you in a warm loving light," I would be prepared in a jiffy.

Not everybody reports the WWL (warm loving light) though. I may have had a near-death experience with my gallbladder extrication and it was no experience at all. Just being given something that made me doze off and then waking with a pain in my side. And that's lots of people's experience. So can we safely conclude that no very firm conclusion is justified by the data? Not recalling any tunnels of light is not conclusive. We don't remember most dreams, after all. So why should we expect to remember journeys out of our bodies during near-death experiences? Or we can argue that the visions are just a bit of residual brain flickering. How can we be sure? But one thing is clearly established by the data: for a fair number of people their death experience is by far the most pleasant experience they have ever had. Better than steak. Better than sex. Better than a warm shower. I mean really nice. I can't believe they are all lying. This doesn't prove all the other beliefs that they come back with. Maybe these those are just dreams the self provides itself to help it swallow a bitter pill. But the positive death experiences at least raise a question about the validity of death as the great negator of life.

We normally live our lives as a structure of sensations, thoughts, emotions, memories and situations that organize themselves around aims in a gestalt-like manner. (For more on this idea see this article.) These experiential gestalts are continuously collapsing and re-creating themselves in new ways as we move through life. Each morning when we wake, we are a somewhat different person than when we went to bed. But also, within any day, as our tasks and situations change, we move through little deaths and re-births. Whitehead, who describes life in terms similar to these, speaks of the continual "perishing" that is at the core of creative existence. From this point of view, death is not the enemy of life, but its co-worker on an ongoing basis. It would be consistent with this pattern if each lifetime were a single day in a larger life.

Outside the physical suffering that may in some cases be associated with it, there is little one can say against dying. It's not a matter that life is good and death is evil. In order for creation to work, birth and death must be approximately equal. From an ecological perspective finding an optimal balance between birth and death would have to be understood as the good.

Perhaps, when the time is right, we should welcome death: 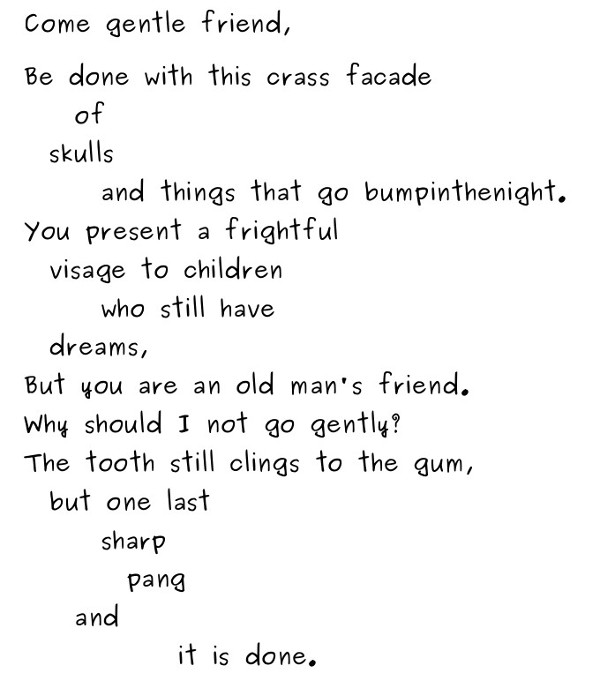 Which brings us to the second major argument against creation: pain.

Pain obviously serves a protective function for the body. However, chronic, long-term pain in a situation where the cause cannon be removed is of no benefit, and will, if severe, lead to the conviction that life is not worth living. Since we cannot see the experience of other entities, there is no way to be certain what animals or plants experience pain and what ones do not. We do know that animals and plants that are quite primitive withdraw from harmful stimuli, and that would suggest that they feel some pain. There is no reason to doubt that animals further up on the evolutionary scale feel pain. However, two factors suggest that they seldom experience serious chronic pain. First, they probably respond to severe and sudden injuries with a lack of pain, as human beings seem to. And when they are in severe pain, I think they probably just go off somewhere to die. So for them the pain is time limited -- probably to a few days.

The probability is that most if not all cultures discovered plants that cured pain many centuries ago. We know that in Peru, coca was used for pain at least 3000 years ago. Opium has been known in China, Greece and Asia Minor for centuries.

Given the extensive knowledge of plants that hunting/gathering societies possessed, it is reasonable to suspect that they were aware of ones that treated pain.

Modern society is able to produce pain relievers synthetically, but modern people suffer from the peculiar notion that individuals cannot be trusted to decide for themselves what pain medicines to take, even when they are presented with all the facts about those medicines that medical science possesses. A vague sense of sin clings to the idea of taking pain relievers.

Write for Politics of Health and work with David Werner on issues of health. Worked in the field of "Mental Health" all my life. Am now retired. Jim
Related Topic(s): Belief; Beliefs; Buddha; Creator; Death; Death; Drugs; Matter; Medical; Opium; (more...) Spiritual; Suffering; Suffering; Time, Add Tags  (less...)
Add to My Group(s)
Go To Commenting
The views expressed herein are the sole responsibility of the author and do not necessarily reflect those of this website or its editors.