"When I was very young, I ran and played on the slopes and in the meadows, carefree and without many duties or responsibilities. On these wonderful days, when it was warm enough in our valley, I sometime ran around naked with the other children just for the joy of it." 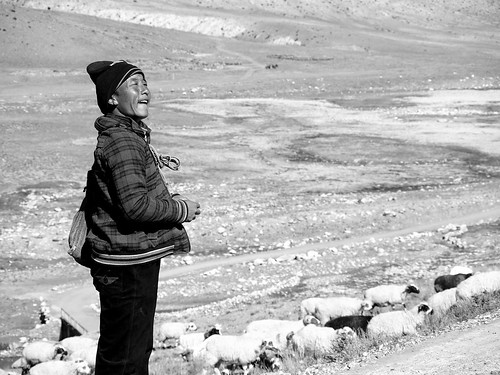 In his autobiography, "The Struggle for Modern Tibet", Tashi Tsering describes his experiences as Tibet developed from a traditional, hierarchical society under a Buddhist theocracy to a country that was committed to becoming a modern industrialized society under the rule of Maoist and then post-Maoist China. As an advocate of universal education and the modernization of his homeland, he was not entirely unhappy with the occupation of his country by China. He felt that Tibet needed the jolt that China provided to move from a traditional, pre-literate society that was not much interested in change, to a modern industrialized nation. Despite some ugly experiences along the way, he came to see the net outcome as gain.

Is it possible that he was wrong? Perhaps there is a fatal flaw in the project that dominates all nations at this point in history: the struggle to become modern, technologically driven, industrialized powers.

Although he was a believer in education, science, technology, and the modern project, Tashi was not oblivious to the joys that were provided by the traditional society into which he was born. Here is his description of his childhood:

My family was relatively well off by local standards, and I had a carefree youth with little or no work until about the age of seven, when I started doing odd jobs around the house. My first major responsibility came when I was eight years old and my father told me I was to work as a shepherd in the summers like the older boys. I was thrilled. My job really was not hard, but I felt great pride. I had to help drive the animals (about three hundred sheep and goats) into the mountains each day, stay with them while they grazed, and bring them back in the evening. In summer the days were long, the skies were immense, and the mountain valleys were beautiful. I loved the feeling that I was doing something that mattered to my family. But I have to admit that it was mainly just fun, because I met many other young herders like myself, and there was always something to do while watching the herd graze. When the weather was hot, we shepherds played in the icy streams. And despite the dominance of Buddhism in our society, with its strong emphasis on the sanctity of life, we often hurled stones at birds and rabbits with our slingshots, and sometimes we even caught fish in the streams with our hands. When we spotted a fish hiding we reached out with cupped hands, careful that no sudden movement frightened it. Then, holding our breath, we would grab as fast as we could. Usually we missed, but occasionally we got lucky and were able to fling a fish onto the bank. We boys thought that was a great feat and would immediately set up a makeshift hearth of stones and dung, which we lit with the flint strikers we all wore. I can still recall the glorious taste of the freshly cooked fish. On quieter days we spun wool on simple handmade spindles or sewed boots for the winter. We ran, occasionally fought, and mostly played and enjoyed the delicious feeling that we were on the way to becoming men while our charges grazed on the mountain meadows! Herding was serious work since our animals represented the major portion of our family's wealth, but for us kids, it was mostly fun.

Tashi, The Struggle for Modern Tibet, pp. 8 and 9

It would be hard to improve on such a childhood.

Despite the happiness of his early years, Tashi felt a discontent, a restlessness that he identified with the desire to become literate. His father had attained some degree of literacy. Tashi was not sure what level of competence he had achieved, but he recalled watching him make letters, and was fascinated. He wanted to have this skill himself, but he wasn't sure why. In his traditional Tibetan society, literacy did not give a person any great advantage.

From as early as I can remember I wanted to learn to read and write. This desire was not common in our village or in the rest of Tibet. There were no newspapers or radios, and although most people were illiterate, that was not a problem for them or for the village as far as anybody could see. In our tradition-bound world there was no need for literacy in the modern sense. The community and the culture told you who you were and what to do. There were clear and prescribed roles for persons of every age and gender ...

Tashi felt that the skills of reading and writing would open new horizons for him. And he was not mistaken. Language skills -- specifically reading and writing -- did serve as a doorway to new worlds for him as it has done for countless people. But this expansion of one's world does not always lead to greater happiness. Indeed, it can be argued that greater language skills open us to ideologies, and that ideologies, of all kinds, place a layer between us and reality, and that any such layer between us and reality dulls the vividness and intensity of our experience. (By ideologies I mean theories about reality, ideas about how it is all put together, and what, if anything, it means.)

Is the taste of freshly cooked fish ever as wonder-filled as when we are children? Is a sort of ideological alienation, accompanied by a dulling of our experience, the inevitable price we have to pay to gain the benefits of education and modern life?

Write for Politics of Health and work with David Werner on issues of health. Worked in the field of "Mental Health" all my life. Am now retired. Jim
Related Topic(s): Brain; God; Materialism; Matter; Modernity; Science; Self; Technology; Telepathy, Add Tags
Add to My Group(s)
Go To Commenting
The views expressed herein are the sole responsibility of the author and do not necessarily reflect those of this website or its editors.

The Scapegoat of Least Resort