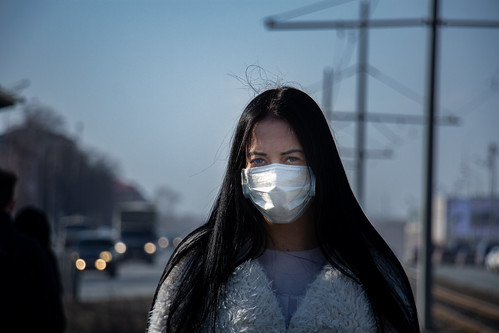 Coronavirus COVID-19 pandemic
(Image by vperemen.com)   Details   DMCA
As a retired non-essential, I'm a spectator sheltering at home from the silent and invisible enemy percolating around us all. I worry about the ultimate toll the pandemic will take because the government's failure to heed so many warnings has left us weak and unprepared. My personal sense of vulnerability is lessened because I have Medicare and I can afford an over-priced Medigap and Part D drug insurance. But I fear for the millions who are losing their jobs and will join the swollen ranks of the uninsured and under-insured, victims of a broken for-profit health care system.

The plague in Sophocles' Oedipus Tyrannus suggests an image for the current pandemic. The play opens with a priest describing an affliction that has overtaken Thebes. It is a miasma more pervasive than a disease in the usual sense, a collapse of the natural and social order. Crops are blighted, herds are dying, infants stillborn and people sickened. Oedipus learns from Apollo's oracle that all this misery will end once Oedipus discovers the murderer of Laius, whose throne he now occupies.

Our new reality is like the Theban miasma because COVID-19 is just one of many imminent threats in our increasingly blighted world. Our psychopathic President won't acknowledge a looming climate catastrophe which, we are told in a recent statement endorsed by 11,000 scientists from 153 nations, is "threatening natural ecosystems and the fate of humanity."

We live in an aggressive empire that has divided the entire planet into six "combatant commands" with 800 military bases in 80 countries. We are abandoning the treaties that have prevented an escalating nuclear arms race and mutually assured destruction (MAD). The U.S. leads a military alliance, NATO, that started out as a defensive measure against further Soviet expansion after WWII but is now an anti-Russian alliance. Although Russia's military expenses are less than one ten th those of the U.S., it has parity in nuclear weapons. Using even part of the arsenal of either side would make Earth uninhabitable.

Despite this horrible possibility, NATO is currently engaged in a multinational military exercise called Defender Europe 20, deploying weapon systems and 20,000 U.S. soldiers in four countries bordering Russia. Imagine how Americans would feel if the former Warsaw Pact had incorporated Mexico and held military exercises there to safeguard Latin America from U.S. aggression. Fortunately, the pandemic is forcing NATO to cut back on its plans for now.

Is this swirl of existential threats just a coincidence, or is there some underlying evil driving it all? Perhaps we can answer this question by looking in the same direction as the citizens of Sophocles' Thebes--at the power that now rules us.

Since the Reagan/Thatcher era, neoliberalism has become the ideology of capitalism. An ideology is a set of beliefs, stories and images that serve to justify the distribution of power in a society. The Oxford online dictionary defines capitalism as "An economic and political system in which a country'strade and industry are controlled by private owners for profit, rather than by the state." This is a radical notion: private profit-seeking owners, and not government, "control trade and industry," i.e. control pretty much everything. Why should I want such a power over me?

Neoliberalism's answer to this question begins by enshrining freedom, narrowly defined as the absence of external coercion. It grudgingly accepts that government, with its coercive power, is necessary for law and order. But the only legitimate purpose of government coercion is to protect individual freedom. In an economy the fundamental exercise of freedom is the voluntary activity of buying and selling. Out of respect for the freedom of buyers and sellers, the government's role is laisser faire: enabling transactions, letting them happen, NOT interfering.

From this viewpoint, regulation of markets should be minimized. Labor unions are bad actors interfering with the freedom of employers and workers to buy and sell in the labor market. Goods, services and institutions such as education, health care and transportation should as far as possible be privately owned (to avoid government coercion). Neoliberals believe that competition for profit in a free market enlists the creative abilities of the best and brightest and benefits society far more than government programs. The main role of government should be to collect whatever tax revenue is needed to hire private for-profit providers of essential services.

The neoliberal call for privatization implies a systematic reversal of means and ends in the provision of essential services such as education, healthcare and national defense. The American for-profit health insurance industry is a good example of this reversal. The purpose of this industry should be to pay for the care of the sick. But if its goal is profit and paying for care lessens profit, it will try to avoid covering those most likely to need care, and it will zealously deny as many claims as possible. Calling such an industry 'health care' is almost a contradiction. Neoliberals turn the goal of the health-care industry into self-dealing for providers.

Why do we maintain a global empire of military bases while recklessly stoking a nuclear arms race and aggressively poking at the borders of Russia? Because U.S. military policy is, in true capitalist fashion, "controlled by private owners for profit, rather than by the state." This is the "military-industrial complex" Eisenhower warned us about in 1961. Once again, we have a neoliberal means-end reversal, where the social good of national defense is subordinated to the profits of defense corporations.

Perhaps the greatest obstacle to the United States taking a leading role in mitigating global warming is the $200 million annual lobbying effort of the fossil fuel industry. This results in what the IMF estimates as $649 billion in annual subsidies. Government has become a private asset.

Health care, freedom from war, and a habitable planet are social goods that can't be entrusted to for-profit corporations. Will the demise of capitalism come on time?

Related Topic(s): Capitalism; Corona Virus Coronavirus Covid-19; Empire; Freedom; Health; Healthcare; Medicare; Pandemic; Privatization, Add Tags
Add to My Group(s)
Go To Commenting
The views expressed herein are the sole responsibility of the author and do not necessarily reflect those of this website or its editors.