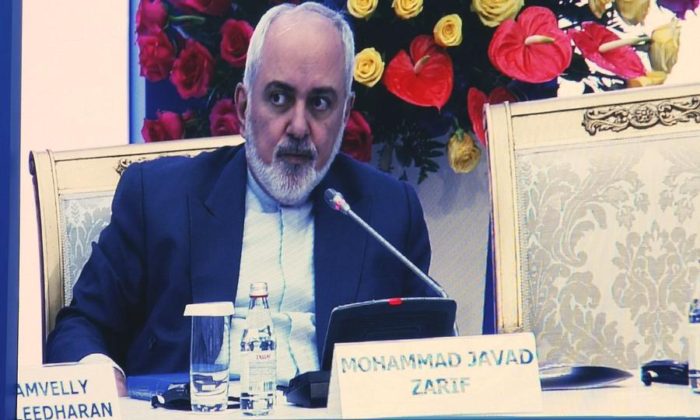 Just in time to shine a light on what's behind the latest sanctions from Washington, Iranian Foreign Minister Mohammad Javad Zarif in a speech at the annual Astana Club meeting in Nur-Sultan, Kazakhstan, delivered a searing account of Iran-U.S. relations to a select audience of high-ranking diplomats, former presidents and analysts.

Zarif was the main speaker in a panel titled "The New Concept of Nuclear Disarmament." Keeping to a frantic schedule, he rushed in and out of the round table to squeeze in a private conversation with Kazakh First President Nursultan Nazarbayev.

During the panel, moderator Jonathan Granoff, president of the Global Security Institute, managed to keep a Pentagon analyst's questioning of Zafir from turning into a shouting match.

Previously, I had extensively discussed with Syed Rasoul Mousavi, minister for West Asia at the Iran Foreign Ministry, myriad details on Iran's stance everywhere from the Persian Gulf to Afghanistan. I was at the James Bond-ish round table of the Astana Club, as I moderated two other panels, one on multipolar Eurasia and the post-INF environment and another on Central Asia (the subject of further columns).

Zarif's intervention was extremely forceful. He stressed how Iran "complied with every agreement and it got nothing;" how "our people believe we have not gained from being part of the Joint Comprehensive Plan of Action; how inflation is out of control; how the value of the rial dropped 70 percent "because of 'coercive measures' not sanctions because they are illegal."

He spoke without notes, exhibiting absolute mastery of the inextricable swamp that is U.S.-Iran relations. It turned out, in the end, to be a bombshell. Here are highlights.

Zarif's story began back during 1968 negotiations of the Nuclear Non-Proliferation Treaty, with the stance of the "Non-Aligned Movement to accept its provisions only if at a later date" which happened to be 2020 "there would be nuclear disarmament." Out of 180 non-aligned countries, "90 countries co-sponsored the indefinite extension of the NPT."

Moving to the state of play now, he mentioned how the United States and France are "relying on nuclear weapons as a means of deterrence, which is disastrous for the entire world." Iran on the other hand "is a country that believes nuclear weapons should never be owned by any country," due to "strategic calculations based on our religious beliefs."

Discussing the negotiations for the JCPOA that started in 2012, Zarif noted that Iran had started from the premise that "we should be able to develop as much nuclear energy as we wanted" while the U.S. had started with the premise that Iran should never have any centrifuges." That was the "zero-enrichment" option.

Zarif, in public, always comes back to the point that "in every zero-sum game everybody loses." He admits the JCPOA is "a difficult agreement. It's not a perfect agreement. It has elements I don't like and it has elements the United States does not like." In the end, "we reached the semblance of a balance."

Zarif offered a quite enlightening parallel between the NPT and the JCPOA: "The NPT was based on three pillars: non-proliferation, disarmament and access to nuclear technology for peaceful purposes. Basically, the disarmament part of NPT is all but dead, non-proliferation is barely surviving and peaceful use of nuclear energy is under serious threat," he observed.

Meanwhile, "JCPOA was based on two pillars: economic normalization of Iran, which is reflected in Security Council resolution 2231, and at the same time Iran observing certain limits on nuclear development."

Crucially, Zarif stressed there is nothing "sunset" about these limits, as Washington argues: "We will be committed to not producing nuclear weapons forever."

Related Topic(s): Iran; Iran Nuclear Deal; Sanctions; Starvation, Add Tags
Add to My Group(s)
Go To Commenting
The views expressed herein are the sole responsibility of the author and do not necessarily reflect those of this website or its editors.