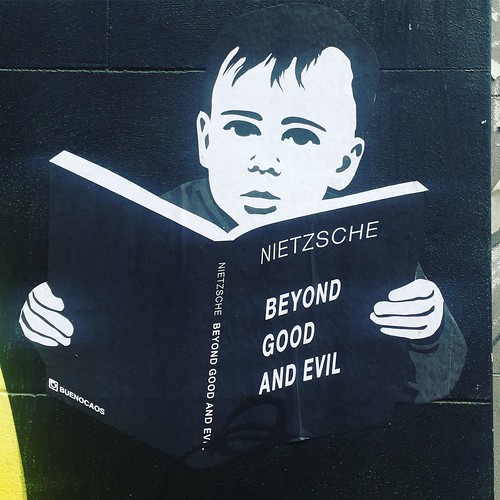 Interview with a Professor of Philosophy: Is Nietzsche Still Peachy?

I would like to interview you and ask some questions about your new book, Moral Psychology with Nietzsche"

I'm at GMT+7 but I'm flexible for a time. We can Zoom or I can send questions with follow-up. Spontaneity versus polish. Same questions.

Thanks for your interest. Where would the interview appear?

OK. Send me the questions, I'll try to get you responses, but it's quite hectic for me right now.

Here are my 10 Questions. Batter up!

TEN QUESTIONS FOR DR LEITER ON MORAL PSYCHOLOGY WITH NIETZSCHE

1. Throughout his work, but especially in The Gay Science, Nietzsche focuses on the death of God. How did he mean that then, and how does it apply now? Was postmodernism a cause or effect of the death of God?

2. In contrast, Voltaire famously said that if God did not exist we would find it necessary to invent Him. Can you speak to that invention? Will we need to re-invent God?

3. Nietzsche once described man as being on a tightrope between beasts and the Overman. Does he ever reach the ubermensch or does he backslide? How do we tell?

4. "Consciousness is the last and latest development of the organic and hence also what is most unfinished and unstrong. Consciousness gives rise to countless errors that lead an animal Or man to perish sooner than necessary, "exceeding destiny," as Homer puts it. If the conserving association of the instincts were not so very much more powerful. and if it did not serve on the whole as a regulator. humanity would have to perish of its misjudgements and its fantasies with open eyes, of its lack of thoroughness and its credulity-in short, of

its consciousness; rather, without the former, humanity would long have disappeared." Kaufmann, The Gay Science, 11.

Nietzsche here compares instinct to consciousness, clearly honoring the integrity of the former and distrusting, seemingly, the misleading nature of consciousness. And yet, today, we seem to have reversed this polarity and look for profundity and meaning in consciousness. Indeed, your new book Moral Psychology with Nietzsche, seems to speak to this reversal. Is this true?

5. The notion of a moral psychology seems almost quaint today, and yet, paradoxically, just the kind of thinking we need. It seems like we've become transactional and relativized, with lots of gray areas that mire us down. How does one justify a moral psychology anymore? And where does Nietzsche fit into that thinking?

6. Some academics see William James as the last great American philosopher engaged in moral psychology; his work was specific to our experiences as a culture. And, going another way, I recall that Nietzsche once said that the only 'psychologist' he'd ever learned anything from was Dostoyevsky. I can see that. Nietzsche was very much the Underground Man. Somehow, this all makes me think of the 75 year hostile engagement Americans have had with Russians. Is there something we glean, some political or psychological insight we can glean from a refreshed study of these two 'psychologists'?

7. An interesting chapter in your new book comes at the end when you compare the moral psychology of Aristotle, Kant and Nietzsche. These are three major, well-studied views of moral psychology, as you point out. Each view is troubling in its own way, the former two perhaps seen anachronistic or inappropriate in our postmodern age, but, surely, Nietzsche's inherited traits model would trouble people the most -- despite, paradoxically, the fact that we live in a designer baby paradigm now (I'm thinking of the Chinese doctor who recently cloned humans and 'accidentally' enhanced their brains). Nietzsche's rejection of all previous unexamined forms and functions, his philology, helped get us here. Beyond considering whether he unintentionally aided Nazi eugenicists in his Will zu Macht, did he see this great new awakening of Man, encompassed, say, in the Singularity?

8. Following from that consideration, is the notion of 'naturalistic' Nietzschean psychology appropropriate for our age? It seems to me that one could argue either way. The far more frightening way is a vision that we are indeed at the threshold of the Ubermensch, that we have not only killed God but pulled on his moccasins for a test ride. Are we trying to find a way for machines to think like us, or are we trying to figure out a way of justifying our merge with machines as brave new beings?

9. Following that, Nietzsche, for all of his cantankerous eloquence, paints a picture of the herd versus the nobles. In a world of 7.5 billion people, and everyone wanting neoliberal democracy with smart refrigerators, where does his seemingly aristocratic posture fit in? Can he teach the masses? Or will he be forever consigned to the few and the proud? In short, who is your intended readership for Moral Psychology with Nietzsche? Is his naturalistic psychology even consistent with a democratic outlook?

10. There's a school of thought that says we've already debauched the best of Nietzsche. I don't know if we can do amor fati, or if we even want to think about eternal recurrence in age of cloning, and who doesn't want to go bunker mentality when they see pop stars incorporating "What Does Not Kill Me" into broken heart songs and N. getting the Che treatment on t-shirts? Does he have shelf life? And how would you sum up the wisdom N. brings to the table of the modern IKEA world order?

Thanks, I'm not sure it would be a productive use of my time to answer these questions, which are fairly far afield of my book.

Related Topic(s): A Dark Illimitable Ocean Without Bound; Book Reviews; Character And Values; Dancing With The Stars; Doctors Without Borders; Drone Culture Philosophy Marketing; Ideas - Philosophy; Interviews; Moral Values; Nietzsche; (more...) Philosophy; Philosophy; Philosophy Philosophical; Questions; Religion And Values; Stillwaters-studios; Vertebrates With A Sixth Sense; Withdrawal, Add Tags  (less...)
Add to My Group(s)
Go To Commenting
The views expressed herein are the sole responsibility of the author and do not necessarily reflect those of this website or its editors.