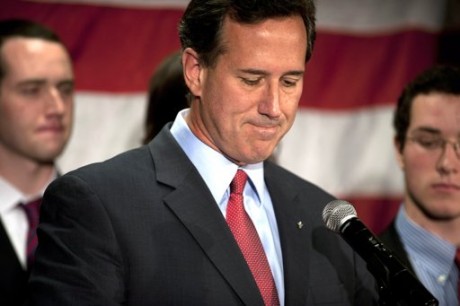 Rick Santorum resisted but could no longer stand up to the pressure from a Republican establishment that wanted him out of the GOP Presidential sweepstakes.

His determination to stay in the race against increasing odds appeared steadfast. The former Pennsylvania Senator wanted to remain until his home state primary even as polls said he faced a loss there.

But GOP leaders stepped up the heat, warning Santorum that he was finished with the party if he didn't get out now.  When his daughter Bella -- battling a rare disease -- went into the hospital over the weekend Santorum had the excuse he needed to get out with what little dignity a political junkyard dog could muster.

Said Santorum as he announced the "suspension" of his campaign at Gettysburg, PA:

"Over and over again we were told, 'Forget it, you can't win.' We were winning, but in a different way. We were touching hearts; we were raising issues that frankly a lot of people didn't want to have raised."

In reality, Santorum wasn't winning. The math wasn't there. He could slow former Massachusetts Gov. Mitt Romney's inevitable march to the nomination but he couldn't stop it or win the nomination on his own.

"We knew it was over before Bella went into the hospital," a Santorum aide tells Capitol Hill Blue. "When the latest numbers came in from Pennsylvania the decision was made to put up the "Going Out of Business' sign. It was just a question of when. The kid's hospitalization gave us a way to bow out."

As polls rolled in showing him falling further and further behind Romney in Pennsylvania and calls from GOP leaders telling him to quit coming in daily, Santorum pulled the plug and made it seem like he was more concerned about his daughter than run for President.

But three-year-old Bella has suffered from birth with Trisomy 18, a rare genetic condition that hampers development in children. She was hospitalized earlier in the campaign. Santorum didn't pull out then.

Spouses and children are often used as props for staged campaigns and Santorum knows how to play the family card, be it a tear-jerker story about his father or a seriously ill child. In his speech in Gettysburg Tuesday, he even threw in a story about his grandfather.

In the end, Santorum bowed to pressure from the GOP establishment and the numerical reality that he could not win.

Politics is theater and Santorum played his part right up until it was time to exit, stage right.

Related Topic(s): Child Care; Political Opportunism GOP; Political Strategists; Republican; Santorum Rick, Add Tags
Add to My Group(s)
Go To Commenting
The views expressed herein are the sole responsibility of the author and do not necessarily reflect those of this website or its editors.