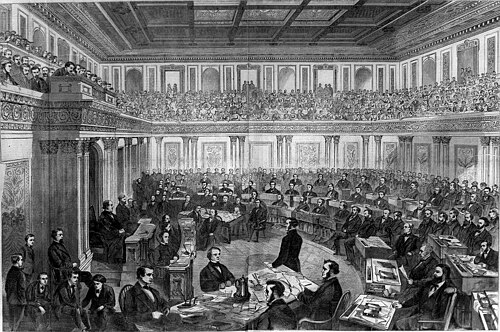 The main Democratic impeachment charge against US president Donald Trump is simple: Trump attempted to pressure and/or bribe the president of Ukraine to investigate a political opponent (Joe Biden), House impeachment managers say, both for corrupt motives (to win re-election) and in violation of the law (by withholding congressionally appropriated aid).

On fact and law, the Democrats' case is air tight. Trump publicly confessed to the actions in question, and the Government Accountability Office's report on those actions concludes that Trump violated the Impoundment Control Act of 1974.

First, that the Constitution imbues the president with near-complete power over foreign policy and that this is therefore a mere matter of policy disagreement in which his opinion carries total weight. Unfortunately, the Constitution says otherwise.

Second, that Trump's motives were pure: His actions were driven by moral outrage at the possibility of corruption. Why, he just wanted to get to the bottom of things! Unfortunately, no really one believes that, least of all those proclaiming it.

And third, that Joe Biden is himself corrupt, that he pressured Ukraine's government to fire a prosecutor who investigated his son's lucrative relationship with Burisma, an energy company based in Ukraine.

Let's have a look at that allegation. Here's a quick timeline:

Joe Biden was tasked with "overseeing" the US relationship with Ukraine in Marc 2014.

In April 2014, his son, Hunter, was hired by Burisma, and Biden traveled to Ukraine to offer $50 million in US aid. That spring, Ukrainian prosecutor Viktor Shokin opened a probe of Burisma.

In March 2016, Shokin was fired as a prosecutor.

In January 2017, Ukraine ended its investigation of Burisma after a settlement (or, some suggest, a bribe).

In January 2018, Joe Biden publicly bragged about how he'd engineered Shokin's firing by threatening to block $1 billion in US aid.

Looks like a pretty strong case against Biden. He probably abused his position as vice-president, at the very least to cover for his son, and perhaps for himself (was Burisma "buying influence?").

Throughout this time, US mainstream media covered the appearances of impropriety.

Throughout this time, Republicans controlled both houses of Congress.

Related Topic(s): Impeachment; Joe Biden; Trump, Add Tags
Add to My Group(s)
Go To Commenting
The views expressed herein are the sole responsibility of the author and do not necessarily reflect those of this website or its editors.