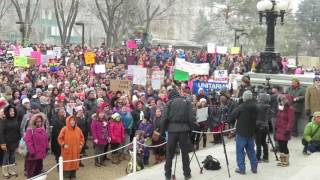 Can a progressive populist movement be built in the rural areas and small towns that Donald Trump dominated in 2016? On Tuesday, People's Action -- one of the largest multiracial, people's organizations in the country with 48 member organizations in 30 states -- launched a major initiative to do just that.

Instead of writing off red counties in rural and small town America, the project aims to challenge Trump's fake right-wing populism with a progressive populist movement built from the bottom up.

Their Rural and Small Town Organizing Strategy will target 72 counties in 10 states across the heartland and the south. The counties include 28 "pivot" counties that voted for Obama in 2008 and 2012 and then went to Trump in 2016. They are in key swing states like Wisconsin, Iowa, and North Carolina.

People's Action and its member organizations will build organizing efforts in all 72 counties by the end of 2018 -- and sustain growing community organizations through 2020 and beyond. Unlike traditional grassroots organizing efforts, this initiative will be identifying new leaders, and supporting insurgent candidates from the start.

Rural and Urban Together

George Goehl, director of People's Action, grew up in a rural, working-class family in Indiana. At Tuesday's launch at the National Press Club in Washington, he noted that contrary to stereotypes about rural America, these counties, while predominantly white, include African-American communities, Native American reservations and areas with significant immigrant populations.

The right has used race as a weapon to divide poor and working class communities. Now, through this project, George argues, PA will seek to build a multi-racial populist movement in rural and small town America that can join with poor and working people from urban America to transform the country.

The challenge of "unifying a multi-racial poor and working class coalition is real," Goehl told rural grassroots leaders from across the country who gathered for the launch. "But know this: We have found the villain in this story, and it is not each other. "

Is this possible? Kischa Peña, an African American mother of two from Mebane, North Carolina, thinks so. "After the 2016 election and Charlottesville, I had all but given up on White America," she said. "Then in September 2017, I met Down Home. I was skeptical of building a multiracial poor and working class power structure, in Alamance County of all places. But here I am, eight months later, more hopeful than ever that we can win this fight.

"We can win this fight by being open to having difficult a transparent conversation, by actively listening to each other's stories," Peña told those gathered at the NPC. "Realizing that we have more in common than we do that separates us, and seeing those shared issues as opportunities to build the power that we all know our families deserve."

We live in a populist moment. More and more Americans understand that the economy has been rigged against them, and that our politics has been corrupted by big money. Rural and small town America has taken some of the hardest hits: Jobs lost, plants closed, water fouled, family farms crushed, the relentless spread of the afflictions of despair -- divorce, suicide, depression, addiction.

Trump and Republicans consolidated their hold on these regions largely by playing a race-bait politics, blaming "those people" -- blacks, Latinos, immigrants, limousine liberals -- for what has been lost.

Related Topic(s): Elections; GrassRoots; Peoples Action Party; Politics; Progressives, Add Tags
Add to My Group(s)
Go To Commenting
The views expressed herein are the sole responsibility of the author and do not necessarily reflect those of this website or its editors.