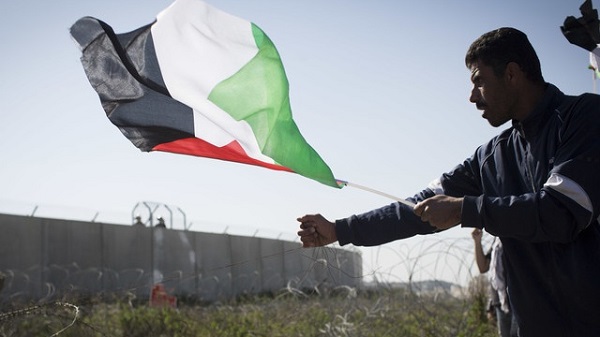 Israel and its allies have never accepted any form of Palestinian resistance
(Image by peoplesdispatch.org)   Details   DMCA

If there is one conclusion to draw from the agreement this week between Israel and the United Arab Emirates - with Israel temporarily "suspending" its threat to illegally annex parts of the West Bank, in return for "full normalisation" with the Gulf state - it is this: The peace industry is back in business.

But this time, unlike the interminable Oslo Accords signed a quarter of a century ago, there won't even be the pretence that Palestinians are needed for "Middle East peace" to proceed. This is a process that takes place over their heads, a dialogue from which they are entirely absent.

This peace process is not between Palestinians and Israel, Washington's client in the region. It is between Israel and oil-rich Arab states loyal to the US. It is a process that allows them to end the pretence that they are enemies of Israel. It means that they can stop feigning support for the Palestinian struggle for a state - even one on the last remnants of Palestinians' homeland.

This is a peace process that effectively rubber-stamps the occupation and the many dozens of illegal Jewish settlements Israel has built to steal Palestinian land over many decades.

This is a peace process that moves the ostensible goal posts from permanently ending the occupation to simply postponing - for a little longer - Israel's ambition to permanently annex those Palestinian lands it has already stolen.

In short, this is a peace process in which Arab states, led by the UAE, formally join Israel in waging war on Palestinians.

In that sense, this is a continuation of the process begun by Jared Kushner, US President Donald Trump's Middle East adviser and son-in-law, in developing the so-called "deal of the century".

From the start, Kushner turned to the Gulf - to which he and the rest of the US political and economic elite have long been personally close - and sought to craft what became known as the "outside-in" strategy.

That meant recruiting as many Arab regimes as possible, starting with the oil-rich Gulf states, to sign up to the Trump "peace plan" and use their weight - and money - to strong-arm Palestinians into surrendering to Israeli diktats.

A White House dedicated to the politics of the used-car lot was bound to imagine that economics could be used to bludgeon Palestinians into compliance. That was why Kushner held an economic conference in Bahrain early last summer, even before he had a peace plan to unveil.

Saudis next in line?

Sensing how this was playing out, the Palestinian Authority under Mahmoud Abbas refused early on to engage with the Trump plan, and soon cut off all ties to Washington. It made no difference. This was a peace plan that did not need the Palestinian people to be involved in the haggling over their future.

The Trump plan, unveiled earlier in the year, offered Palestinians the promise of an eventual state on shards of the West Bank, after Israel had been allowed to annex swaths of their territory.

Now, Israel has put this move on temporary hold in return for normalisation with the UAE. Kushner says other states are expected to follow. Bahrain and Oman are likely to be close behind.

The agreement states: "The United States, Israel and the United Arab Emirates are confident that additional diplomatic breakthroughs with other nations are possible, and will work together to achieve this goal."

Related Topic(s): Agreement; Arab; Deal Of The Century; Diplomacy; Israel; Israel-Palestine Peace Talks; Occupation; Palestinian; Pandemic; Peace; (more...) Peace Activism; Peace Talks Between Israel And The Palestinians; Power; Repression; Trump Diplomacy; Trump Peace Plan, Add Tags  (less...)
Add to My Group(s)
Go To Commenting
The views expressed herein are the sole responsibility of the author and do not necessarily reflect those of this website or its editors.