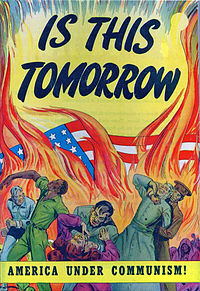 "Cold War anti-communism sought to delegitimize mass movements for social and political transformation wherever they emerged."

The following are remarks given by the author at No Cold War's online webinar entitled "Uniting Against Racism and the New Cold War" held on November 14th, 2020.

From its inception, racism has been a critical force in the development of U.S. capitalism and imperialism. We cannot speak of racism without remembering how the enslavement of Africans and the colonization of Indigenous peoples form the roots of U.S. economic, military, and political development. We also cannot speak of racism as an ideology and system confined to national boundaries. Racism has always been an international phenomenon.

Cold War politics and racism are connected by their shared vision of preserving the power and hegemony of one system of development over another. During the first Cold War, the United States was ascending as a superpower at the same time that capitalism was descending as a legitimate economic model of development. Cold War anti-communism sought to delegitimize mass movements for social and political transformation wherever they emerged. In the U.S., the most vibrant political movement has always been the struggle for the human rights of Black Americans and other social groups terrorized by racism. Black Freedom organizations such as the NAACP and the Student Non-Violent Coordinating Committee (SNCC) were routinely targeted as communist plots and repressed by all forms of law enforcement.

The rise of New China in 1949 intensified the U.S.'s Cold War abroad. U.S. military strategists lamented over the "loss" of China to communism. The U.S. swiftly placed economic and diplomatic sanctions on the newly formed People's Republic of China. The U.S. invasion of Korea in 1950 renewed Yellow Peril racism in the United States and placed U.S. military forces and the People's Liberation Army in direct conflict with each other. U.S. forces would go on to murder more than two million Korean civilians, including tens of thousands of Chinese forces fighting by their side. During this period, racism provided cover for the use of napalm and other weapons of mass destruction and helped erase the war from the American psyche. While the people of Korea and China see the war as a pivotal moment in history, the U.S. calls its own participation in the conflict "The Forgotten War" to this very day.

Not everyone in the United States agreed with U.S. hostilities toward China during the first Cold War. Black American activists in particular took a strong stance against U.S. aggression in Asia and saw the struggle of New China for true independence as a source of inspiration for their own cause of freedom. In a poem, Black activist Claudia Jones wrote of China:

"the most populous nation on this ancient earth, which has burst its shackles, not by boasting and strutting, not by lying about its history and its conquests, but by patience and long suffering, by blind struggle, moved up and on toward the crimson sky."

Du Bois and Jones were not isolated in the opinion that China's successful revolution to end its "century of humiliation" at the hands of foreign powers was intimately connected to the centuries of racist humiliation endured by Blacks in the United States. China was viewed by many Black movement activists as a political and ideological place of refuge from the threat of white imperial rule. NAACP activist Robert Williams took refuge in China after being driven out of the country by white vigilantes and law enforcement. The Black Panther Party visited China twice before Richard Nixon made the trip that led to a normalization of relations between the two countries.

"China was viewed by many Black movement activists as a political and ideological place of refuge."

That Black freedom fighters contributed immensely to a politics of internationalism and friendship with countries such as China remains relevant in this dangerous period for U.S.-China relations. A New Cold War on China has emerged in recent years, and it is once again led by the United States. The first Cold War utilized racism to justify the dehumanization of countries and peoples choosing their own path to independence from colonialism. The hope was that they would reject socialism as their path of development. The New Cold War on China employs the same logic in a period when the U.S. and its model of unipolar dominance is in a process of decline and crisis.

China's rise as an economic superpower and influential force in the areas of poverty alleviation, ecological sustainability, and respect for international law has been deemed a threat to the U.S.' primacy. This has led to a host of hostile policies that include the military encirclement of China, the sanctioning of its tech corporations, a blatant interference in China's internal affairs, and a non-stop demonization campaign surrounding China's pandemic response. Anti-China racism forms the skeleton of the New Cold War on China. China and its people have returned to the position of "Red Menace" in the eyes of many Americans to add to the host of other racist stereotypes that have shaped U.S. thinking about China for more than a century.

"Anti-China racism forms the skeleton of the New Cold War on China."