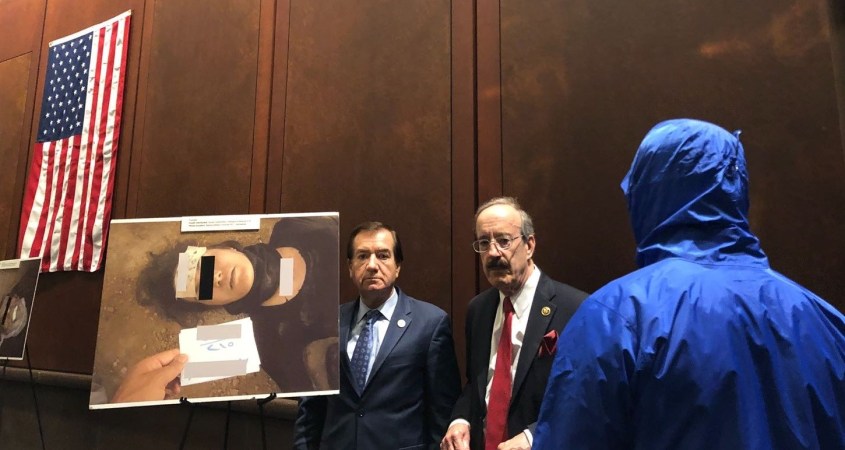 Like the mysterious figure it is named for, the Caesar sanctions bill is the product of an elaborate deception by shadowy US- and Gulf-backed operatives. Instead of protecting Syrian civilians, the unilateral measures are driving them towards hunger and death.

The US Department of Treasury's imposition this June of the so-called Caesar Civilian Protection Act, a draconian set of economic sanctions on Syria, amounts to a medieval-style siege on all Syrians living inside the country.

Inspired by photos that Western governments and media claim were smuggled out of Syria by a supposed Syrian military whistleblower codenamed "Caesar," the sanctions are the product of a highly deceptive intelligence operation orchestrated by the US and Qatari governments.

As this investigation will demonstrate, a network of US- and Qatar-backed regime change operatives marketing themselves as human rights lawyers and concerned Syrian activists groomed the supposed whistleblower, managed his files, and worked overtime to obstruct public scrutiny.

Desperate to stimulate support for war on Syria, this network worked with the US Holocaust Memorial Museum in a cynical campaign to portray the Syrian crisis as equal to - and possibly worse than - the Jewish genocide in Europe.

Shockingly, investigators have determined that at least half of the photographs in the "Caesar" trove depict the bodies of government soldiers killed by the armed opposition. This highly inconvenient fact, which undermines the entire narrative of Caesar's promoters and exposes them as cynical liars, has been ignored across the board by mainstream US media, Congress, and of course, by the network of operatives that managed "Caesar."

Authorized by Congress with no opposition, the so-called Caesar Civilian Protection Act amounts to an act of all out war on the very people it claims to protect. Targeting the Syrian Central Bank and penalizing any foreign company that does business with Damascus, the bill was conceived with the explicit aim of preventing the country from rebuilding after it defeated a proxy war imposed on it by the West, Israel, Turkey, and Gulf monarchies.

Charles Lister, a Gulf-backed de facto lobbyist for the Syrian opposition in Washington, inadvertently revealed the Caesar Act as an instrument of financial terror. In an op-ed for Politico this June, he forecasted "even greater levels of destitution, famine, and worsening criminality and predatory behavior" as a result of the new sanctions.

Predicting that "bread shortages are only a matter of time," and projecting a famine in the near future, Lister cheerfully framed the human suffering caused by the sanctions as "an opportunity" for the United States to achieve regime change.

After a decade of grinding war, however, the Syrian government has proven resilient. And in Damascus, even opponents of Assad concede that sanctions are unlikely to scathe government officials. "Assad and his people are doing fine, and the security state is only stronger because of the war," a businessman who was active in the initial round of protests against Assad in 2011 told me over lunch in Damascus in September 2019. "The sanctions ruin our currency and put old ladies into the street, but they don't touch the regime."

A pair of pro-opposition analysts echoed this view in the national security website War on the Rocks: "The Caesar Syria Civilian Protection Act may prove little more than a policy of economic escalation by default a box-checking exercise for which ordinary Syrians will pay the price," they wrote.

Thanks to the policy choices of the US government, the Syrian people are set to sink deeper into economic misery. Migration abroad will intensify, another generation will be lost, excess deaths will climb, and in a country where over one-third of the population are children, youth will experience deprivation at unprecedented levels.

The coming human catastrophe is the byproduct of a years-long lobbying campaign carried out by a network of regime-change operatives working under cover of shadowy international NGOs and Syrian-American diaspora groups.

Their push for an escalation of the economic war revolved around a supposed Syrian whistleblower who they claim smuggled thousands of photographs from a military prison, revealing an industrial slaughter of opposition activists. It was the code-name of that so-called whistleblower, "Caesar," that inspired the sanctions bill.

Related Topic(s): Death; Famine; Regime-change Wars; Syria; Syria Massacre; Syrian Kurds; Syrian Refugees, Add Tags
Add to My Group(s)
Go To Commenting
The views expressed herein are the sole responsibility of the author and do not necessarily reflect those of this website or its editors.