Cross-posted from The Guardian
A group of rightwing extremists aimed to destabilize post-Mubarak Egypt and roil US politicians. They got their wish. 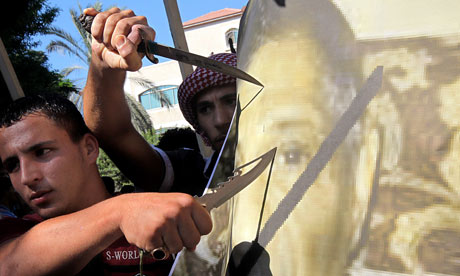 Did an inflammatory anti-Muslim film trailer that appeared spontaneously on YouTube prompt the attack that left four US diplomats dead, including US ambassador to Libya Christopher Stevens? American officials have suggested that the assault was pre-planned, allegedly by of one of the Jihadist groups that emerged since the Nato-led overthrow of Libya's Gaddafi regime. So even though the deadly scene in Benghazi may not have resulted directly from the angry reaction to the Islamophobic video, the violence has helped realize the apocalyptic visions of the film's backers.

Produced and promoted by a strange collection of right-wing Christian evangelicals and exiled Egyptian Copts, the trailer was created with the intention of both destabilizing post-Mubarak Egypt and roiling the US presidential election. As a consultant for the film named Steve Klein said: "We went into this knowing this was probably going to happen."

The Associated Press's initial report on the trailer -- an amateurish, practically unwatchable production called The Innocence of Muslims -- identified a mysterious character, "Sam Bacile," as its producer. Bacile told the Associated Press that he was a Jewish Israeli real estate developer living in California. He said that he raised $5m for the production of the film from "100 Jewish donors," an unusual claim echoing Protocols of the Elders of Zion-style fantasies. Unfortunately, the extensive history of Israeli and ultra-Zionist funding and promotion of Islamophobic propaganda in the United States provided Bacile's remarkable statement with the ring of truth.

Who was Bacile? The Israeli government could not confirm his citizenship, and for a full day, no journalist was able to determine whether he existed or not. After being duped by Bacile, AP traced his address to the home of Nakoula Basseley Nakoula, a militant Coptic separatist and felon convicted of check fraud. On September 13, US law enforcement officials confirmed that "Sam Bacile" was an alias Nakoula used to advance his various scams, which apparently included the production of The Innocence of Muslims.

Related Topic(s): Anti-Muslim; Middle_East_Conflict; Muhammad; Scam Artist; Youtube, Add Tags
Add to My Group(s)
Go To Commenting
The views expressed herein are the sole responsibility of the author and do not necessarily reflect those of this website or its editors.