Outrage against war, against a philosophical and social hegemony that had outlived its usefulness, students converged in the streets and campuses of Paris 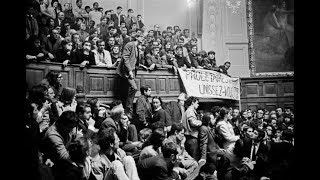 One way or another, for better or for worse, we are all children of May 1968. But what was May 1968, really about? Delightful contrarian Michel Onfray -- France's foremost contemporary philosopher -- correctly identified the quintessence of May 1968: a revolt against Judeo-Christian civilization.

It was a rebellion, Onfray maintains, against every form of authority, and a way of life codified under St Paul: hatred of this world, veneration of the afterlife, detestation of the flesh, dismissal of women, refusal of desire, interdiction of pleasure and sexuality, celebration of suffering, the cult of sin, the teaching of submission, the religion of work, the legitimacy of slavery.

It all harks back to the Roman emperor Constantine, whose conversion in the 4th century AD was the foundation stone of Judeo-Christian hegemony.

May 1968 proposed exactly the opposite: attention to the here and now, passion for the flesh, love of women, a philosophy of desire, the quest for pleasure, a taste for life lived to the fullest, sexual liberation, the refusal of suffering, the abolition of sin, transgression of all interdiction, refusal of submission, refusal of blind obedience, the enjoyment of free time without constraints, the abolition of slavery.

It was what the philosopher Herbert Marcuse had defined, in caps, as "The Great Refusal" (see part 2 of this essay).

Slogans blooming like flowers were all over the walls of Paris. Dreams are reality. The walls are ears, your ears are walls. A barricade closes a street but opens a path. The tears of philistines are nectar of the Gods. No more churches. I decree a state of permanent happiness. Imagination takes power. Under the asphalt, the beach. It's forbidden to forbid. Be realist, demand the impossible. Death is necessarily a counter-revolution. I am a Marxist of the Groucho faction.

Charles Baudelaire provided this quote: "God is a scandal, a scandal that makes money." And also Friedrich Nietzsche, in a staircase of the occupied Odeon theater: "One must carry in oneself a chaos to be able to insert into the world a dancing star."

The students sang TheInternationale, which happened to be the anthem of the left everywhere as well as in the USSR; all these political actors, crucially, did not support their movement (and worked hard to discredit it). But the French twist is that TheInternationale was written during the 1871 Paris commune; thus it was regarded as the ultimate song against authority.

It was a visual feast. The venerable École des Beaux Arts established an Atelier Populaire, producing between May and June 1968 more than 350 different silkscreen posters -- arguably the most extraordinary display of political graphic art in modern history (hugely influential on everything afterward, from punk to Banksy).

How to become a dancing star

It all started with sex. The facts are vastly documented. By 1968 there were 530,000 students in terribly overcrowded universities across France, 160,000 in the University of Paris system alone -- an even more autocratic environment than the Ivy League. That's why, when they started to hit the streets, students attracted so many demonstrators.

Nanterre University, on the outskirts of Paris, was a drab concrete hell facing a slum overflowing with North Africans. The most important issue -- coed dorms -- started to catch fire in March. No boys in girl's rooms; no girls in boy's rooms (except with parental permission); no sex, and nothing to do (planting the seeds of punks' boredom and "No future for you" ethics almost a decade later). In contrast, at the Sorbonne, students got their kicks around the seductive heart of the Latin Quarter.

For the French Ministry of Interior, "student agitation" was all about a tiny band of radicals trying to clone the civil disobedience that was raging in Rome, Berlin and Berkeley.

And yes, Columbia, Berkeley, Berlin, Rome were all in awe -- especially when word got out that the French students had managed to enlist the support of the working class. The honeymoon, though, was brief. French workers and their unions wanted father figure General -- and President -- Charles de Gaulle out, for sure. But most of all they wanted a better deal in the workplace, higher wages and increased holiday pay.

There was a failed attempt at French university reform in 1967. That led to the formation of a hard node of enrage's ("the angry ones"; an echo of the French Revolution). At the start they were only 25 -- for instance wreaking havoc in lecture halls in the name of Che Guevara. But these 25 grew into more than a thousand in March; by May they were at least 50,000; and by the end of May no fewer than 10 million, paralyzing the whole of France.

Related Topic(s): 1968_in_Berkeley_and_Beyond; May 1968; Millennials; Students; World Issues; World War Two, Add Tags
Add to My Group(s)
Go To Commenting
The views expressed herein are the sole responsibility of the author and do not necessarily reflect those of this website or its editors.