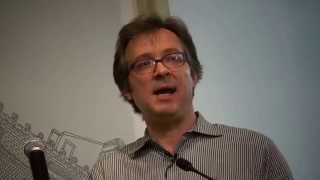 I'm suing the Los Angeles Times. I'm the plaintiff. I'm the one who was wronged. The Times should be defending themselves from my accusations that they fired and libeled me as a favor to a police chief.

But this is America.

Deep-pocketed defendants like the Times -- owned by a corporation with the weird name Tronc and a market capitalization in excess of $400 million -- are taking advantage of America's collapsing court system to turn justice on its head. In worn-out Trump-era America, the corruption and confusion that used to be associated with the developing world has been normalized.

If you're a big business like Tronc, you may be the defendant on paper but you have all the advantages in court. Your money allows you to put the plaintiff on the defense. You're equal in the eyes of the law -- theoretically. But it doesn't feel like justice when the victim has to defend himself from the criminal. It's like that song "Lola," in which the Kinks sang "girls will be boys and boys will be girls"; the courts system is a mixed up, muddled up, shook up world.

States like California passed anti-SLAPP laws to defend individuals with modest incomes (like me) against deep-pocketed plaintiffs (like the Times) that file frivolous lawsuits to intimidate and harass their critics. After an anti-SLAPP motion is filed, the case freezes until a judge decides whether the case is meritorious. If the judge says it's frivolous, it's dismissed and the poor individual defendant gets his or her attorney's fees paid by the deep-pocketed corporation plaintiff.

After I sued them for defamation and wrongful termination, the Times filed three "anti-SLAPP" motions against me. So if the judge decides I don't have a good case, this middle-class individual plaintiff will have to pay deep-pocketed defendant Tronc's legal fees. The Troncies want at least $300,000.

Talk about topsy-turvy! The legislature should fix this law but they won't because there's zero political movement in that direction. I may be the only journalist to have criticized anti-SLAPP laws in a public forum. Articles about anti-SLAPP feature nothing but praise.

There were three motions. I lost one on June 21st, against the individual Times employees and executives involved in libeling me. (I plan to appeal.) That loss prompted a parting of ways with my attorneys. What followed was a month of representing myself pro se (in California they call it in pro per).

I now have new lawyers, and we're waiting to hear how I did arguing against ace lawyer Kelli Sager's anti-SLAPP motions for the Times and Tronc in LA Superior Court on July 14th. It sucked. But representing myself gave me a full-immersion crash course in just how messed up the courts really are.

The big thing I learned was that poor people have zero access to justice.

Nor do the middle class.

After the June 21st debacle, a semi-retired lawyer friend advised me to file a Motion for Reconsideration, a request to the judge to take another look and perhaps realize that he made some mistakes. The law gives you 10 days to file.

My Motion for Reconsideration was one of numerous motions I would have to draft and file myself while pro se. It was incredibly expensive, wildly burdensome and so daunting I bet 99% of people without a lawyer would throw up their hands and give up.

Related Topic(s): Corruption; Court System; Fired; Justice; Lawsuits, Add Tags
Add to My Group(s)
Go To Commenting
The views expressed herein are the sole responsibility of the author and do not necessarily reflect those of this website or its editors.