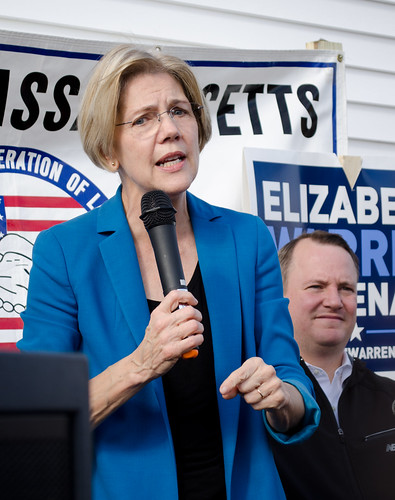 From forgetting former President Barack Obama's name to having your wife ask voters to "swallow a little bit" of his pro-corporate positions on healthcare, the oligarchs in control of the two-party political system in the United States are well aware of Biden's struggles. According to the Washington Times, Biden is losing the support from the corporate media. The editorial cited a study from Axios which concluded that of 100 media stories about the Biden campaign that received the most attention on social media, 77 were negative in character. While Biden consistently leads in the polls, the DNC elite has gone fishing for of an insurance policy for Biden's flailing campaign.

Enter Elizabeth Warren. At first, the Massachusetts Senator seemed like a dark horse in the race and a mere thorn in the side of Bernie Sanders. Kamala Harris appeared to be the early DNC favorite and her campaign has worked overtime to show its commitment to a neoliberal economic and political agenda. However, Harris was stymied by Hawaiian Congresswoman Tulsi Gabbard's thirty second run down of her record as Defense Attorney and Attorney General for the state of California during the second Democratic Party primary debate. Ever since, Harris has seen her stock decline mightily in the polls while Elizabeth Warren's polling numbers have increased dramatically.

This is no coincidence. The DNC elite, a who's who of Wall Street donors and "party insiders," have chosen Elizabeth Warren as the safest insurance policy to Joe Biden. Warren has positioned herself as the safer version of progressivism in contradistinction to Bernie Sanders' full-fledged New Deal politics. As far back as late February of 2019, Warren was deriding corporate "special interests" while signaling that she would not succumb to "unilateral disarmament" in a general election against Trump by forgoing corporate donations. The progressivism of Elizabeth Warren was thus a malleable project with a history of inconsistency, as evidenced by her constant flip-flopping on issues such as the privatization of education in Massachusetts.

In recent weeks, Elizabeth Warren has been putting smiles on the faces of the Democratic Party establishment. Her performance at the DNC's summer fundraiser in San Francisco in late August received widespread positive coverage from the corporate media. The New York Times, for example, reported that Warren has been sending private messages to Democratic Party insiders to let them know that she is more interested in leading a "revival" of the Democratic Party rather than a revolution. An article in The Atlantic provided snippet remarks from people like Don Fowler, described in the piece as a former DNC-chair and "long-time Clinton-family loyalist," who called Warren "smart as sh*t" for her inside-out approach to her political campaign. A more recent editorial in The New York Times offered a glimpse into Warren's former big donor connections from her 2018 Senate campaign. According to the Times, Warren was able to transfer 10.4 million USD to her presidential campaign effort in part because of the generosity of the very same corporate elite that she now condemns as holding too much influence over the Democratic Party. NBC News further revealed that Elizabeth Warren has an open line of communication with the much maligned but infamous Democratic Party establishment leader, Hillary Clinton.

In other words, Elizabeth Warren is saying and doing all the right things to position herself as the DNC's choice for the presidential nomination should the Biden campaign continue to falter. Donald Trump is guaranteed the nomination for the Republican Party ticket after taking over the party in 2016 from defunct establishment figures such as Marco Rubio, Jeb Bush, and Ted Cruz. The DNC is looking for a candidate who will oppose Trump but support the neoliberal and foreign policy consensus that exists in Washington. At first, Warren's mimicry of Bernie Sanders' talking points raised a few eyebrows on Wall Street. While some of those eyebrows remain raised, the DNC clearly prefers Warren's "revival" over Sanders' "political revolution."

That's because Warren's campaign to "revive" the Democratic Party is bereft of political principle. Whatever Sanders' political limitations as a "left" alternative to the establishment, the Vermont Senator is by far more progressive than Warren. Warren voted for the Trump Administration's recent military budget in 2017 even after tens of billions of dollars were added by Congress to the original proposal. During Israel's 2014 massacre of the Palestinians in Operation Protective Edge, Warren claimed Israel had a right to defend itself. Bernie Sanders offers a clear proposal for Medicare for All already drafted in the Senate, while Elizabeth Warren believes that Medicare for All can be implemented in "many different ways." In CNN's Climate Town Hall, Warren opposed public control of utilities while Sanders supported it. A deeper look at Elizabeth Warren reveals that she is more aligned with the establishment than she wants the public to believe.

All of this is to say that the DNC is looking for the best-case scenario for its corporate masters, which is the worst-case scenario for working people in the United States. The principle goal of the DNC is to stop Bernie Sanders from getting anywhere near the nomination. Prior to Warren becoming insurance policy for Joe Biden, the DNC hoped that the Massachusetts Senator would split supporters of Bernie Sanders down the middle. This would lead either to a clear path to the nomination for a handpicked candidate (Biden, Harris, fill in the blank) or to a contested convention where the unelected but very wealthy "superdelegates" would cast the deciding vote. Should Warren have turned out a lame duck, the DNC could still rely on over a dozen candidates with careerist ambitions to force a contested election at the DNC convention in Milwaukee.

Workers in the United States have no insurance policy when it comes to the 2020 presidential election or any other election for that matter. Austerity, privatization, and super exploitation is the law of the capitalist land in the USA. Sanders is attractive to many workers in the U.S. because of his consistent articulation of an anti-austerity platform which includes living wage employment, a Green New Deal to help provide that employment, and a solid commitment to Medicare for All. But Sanders remains deeply loyal to the Democratic Party and has stated firmly on several occasions on the campaign trail that he would support any Democratic Party candidate should he lose the nomination. Sanders frames Donald Trump as the most dangerous element in U.S. society even as his own party colludes to prevent him from having a fair shot at the nomination. Sanders and his supporters must realize that Elizabeth Warren is not a friend, but an opportunist who is more than willing to profit from their demise. The best-case scenario for the working class is that wall to wall resistance to Sanders will lead to a mass exodus from the party and open the door for an independent worker's party to form amid the collapse of the DNC.