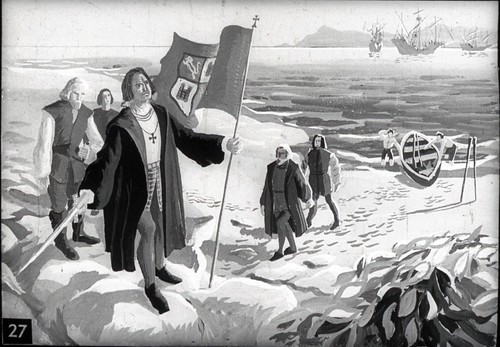 Given the outpouring of scholarship and the upsurge in Native American activism since the 1992 500 year anniversary of Columbus's first landing in the Americas, one might think the 'Columbus Discovered America' myth has been thoroughly debunked and discredited. But all one has to do is pay attention to how the European conquest of the Americas that ensued is still too often depicted in the mainstream media and in our schools, not only around Columbus Day but throughout the year to see otherwise. For example, see Pinterest, a widely shared platform for teachers sharing lessons that posts Columbus lessons that could have come out of the 1950's.

So this is part 3 of a 4 part series, which I hope will be a usable primer taking on and rebutting the many dimensions of the Columbus myth.
Part one dealt with the nature of the world and people Columbus intruded on, debunking the eurocentric myth that Columbus "discovered" a land that was barely populated, undeveloped, and an untamed wilderness despite millions of people already living there for thousands of years. Part 2 debunked the Columbus-as-hero myth by examining how his genocidal attacks on the indigenous populations of the Caribbean led to the opening of the African slave trade, and now part 3 covers how and why all this has been justified over the centuries.

The Genocide That Led To The African Slave Trade

Columbus didn't invent slavery-but he played a key role in its revival as a large scale commercial enterprise at the dawn of the economic system of capitalism. The origins of slavery go back to the agricultural revolution some 10,000 years ago, which gradually replaced hunting and gathering as the main (but not only) source of obtaining food around the globe. Humans for the first time gained some control over their food supply by creating a surplus through planting crops and domesticating animals. This development also gave incentive to use conquered peoples as slave labor instead of killing them as competitors in the fight for survival : "So enslaving an enemy rather than killing him became a means to harvest a man's labor...a new tool was acquired, the slave..." (Milton Meltzer, Slavery A World History, 2)

Two basic forms of unfree labor took root : lifetime hereditary chattel slavery, where a person was enslaved for life, as well as their descendants, and indentured servitude, a temporary chattel-hood where a person was the property of another but for a set period of time such as five to seven years-if they lived that long. Both forms are referred to in the Old and New Testaments.

Over thousands of years, slavery came to be replaced by the feudal system of serfdom---semi-forced labor, where peasants were tied to the land they worked, turning over the bulk of what they produced to the feudal lord while living on a minimal subsistence portion for their own survival needs--if that. While greatly diminished, slavery itself never disappeared, but was relegated to a peripheral role in the feudal economy.

The institution of slavery was not a major force by the time the first Portugese caravels sighted the Guinean coastline at the beginning of the 15th century...slave trading remained an incidental part of...economic organization...the arrival of the Portugese on the sub-Saharan African coast would ultimately represent a major new development in the history of the slave trade. (Herbert S. Klein African Slavery in Latin America and the Caribbean, 10,13)

So slavery began to make a comeback with Portugal developing a slave trade off the west Africa coast in the mid-1400's ( which Columbus had a role in), shipping almost 200,000 kidnapped Africans to Europe and elsewhere by 1500. It is well-established that slavery played a major role in the development of the capitalist economic system:

As Karl Marx put it :The discovery of gold and silver in America, the extirpation, enslavement and entombment of the aboriginal population in mines, the beginning of the conquest and the looting of the East Indies, the turning of Africa into a warren for the commercial hunting of 'black skins', signaled the rosy dawn of the era of capitalist production. These idyllic proceedings are the chief momenta of primitive accumulation. On their heels treads the commercial war of the European nations, with the globe for a theatre... (Karl Marx, Capital, vol. 1 p 775, International Publishers, 1947 )

But there's very much a dialectical relationship whereupon the emerging capitalism breathed new life into slavery as a labor system. It was not just a one-way street: the European conquest of the Americas created a further development for a slave labor system, but of a new type-large scale commercial slavery.

As Karl Marx's collaborator Frederick Engels succinctly put it in referring to the unforeseen social consequences of capitalist development : When ...Columbus discovered(sic)America, he did not know that by doing so he was giving new life to slavery, which in Europe had long been done away with, and laying the basis for the Negro slave traffic (Quoted in Michael Roberts Blog, Engels on Nature and Humanity)

As previously discussed in part one of this series, when Columbus's voyages opened the door to the European conquest of the Americas, there were tens of millions of people throughout the hemisphere. And as the Europeans --first Spain and Portugal, soon to be joined by England, Holland, and France-- killed off millions through disease, murdering those who resisted, and working people to death, there came the need to replace the labor supply, ultimately through what became known as the African slave trade.

Columbus's policies, followed by the on-going genocidal policies of the Spanish and the other Europeans who followed, created a new need for labor in the Caribbean as the indigenous populations were wiped out, now to be met primarily by importing enslaved workers from Africa and to a lesser extent the importing of indentured European servants and other poor people. This slave trade became integral to the European colonization of the Americas--and the rise of capitalism.

By 1619, European slavers had brought a million Africans to the Caribbean and Latin America. In total, over hundreds of years, 54,000 voyages shipped at least twelve million kidnapped Africans to the all the Americas. It is estimated that as least two to three million never survived the trip. (. pbs.org/wgbh/aia/part1/1narr1.html)

Indeed, the number of Africans forcibly imported into the New World actually exceeded the number of whites who would come to the Americas before the 1830s. Between 1492 and 1820, approximately ten to fifteen million Africans were forcibly brought to the New World, while only about two million Europeans had migrated. (Digital History ID 3569)

Related Topic(s): Africans; Atrocities; Capitalism; Columbus-Christopher; Marx, Add Tags
Add to My Group(s)
Go To Commenting
The views expressed herein are the sole responsibility of the author and do not necessarily reflect those of this website or its editors.