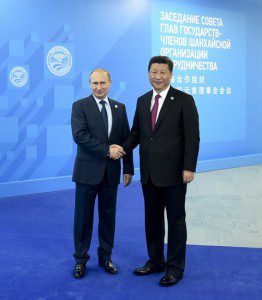 As the whole planet attempts to digest the implications of Brexit, the real heart of 21st century action once again shifts to Beijing, where President Vladimir Putin on Saturday pays a visit to Chinese President Xi Jinping.

Business will include clinching a $6.2 billion high-speed rail deal; increased supply of Russian wheat to China -- by building a Trans-Baikal grain terminal; and steps towards deeper military cooperation. They are already cooperating on an engine that will power the new Russia-China airliner.

Everything connected to the Russia-China partnership spells out Eurasia integration. It starts with the New Silk Roads, a.k.a. One Belt, One Road (OBOR), which will progressively interplay with the Eurasia Economic Union (EEU), as Putin emphasized at the St. Petersburg forum. It involves the expansion of the Shanghai Cooperation Organization (SCO); the immediate future of BRICS, including the New Development Bank (NDB); projects to be financed by the Asian Infrastructure Investment Bank (AIIB); and Russia-China coordination inside the G20.

OBOR and the EEU naturally merge as Eurasia will be slowly but surely fashioned into a massive emporium -- an interlocking trade and infrastructure network stretching from Russia's Far East and the Chinese east coast to Western Europe, including the Middle East and Africa on the way.

Geopolitically, the expansion of OBOR-EEU is Eurasia's response to the lame duck Obama administration-peddled Trans-Pacific Partnership (TPP), which excludes both Russia and China. Xi Jinping has visited Central Asia and Eastern Europe recently -- from Serbia to Uzbekistan -- selling OBOR. Moscow, considering its influence over Balkan states, will add extra support.

Additionally, Beijing has as much as a $4 trillion pile of cash to be used at the discretion of Xi and the collective leadership. This is the reality -- not the usual US "Think Tankland" blabbering about China's imminent implosion. Compare it with the Fed printing so many new US dollars, about $60 billion a month, as the US would have a really hard time committing to any possible financial investment (apart from war) in the $100 billion range.

Beijing and Moscow inevitably would have come to the conclusion that their strategic partnership creates leverage and thus increases its value as it translates into multi-vector supply chain geopolitics.

"Pipelineistan" -- with those humongous 2014 Siberian deals -- is an essential node of the whole package, as Russia will ensure the supply of natural gas to China bypassing the dreaded Strait of Malacca, which Beijing well knows the US Navy could easily block at will. The interpenetration also translates, for instance, into Gazprom offering CNPC a stake in the monster Vankor gas field.

Moscow for its part does not need to rely exclusively on the West for foreign investment -- on top of it controlled/sanctioned by Washington. Chinese investment will be key, as under OBOR-EEU synergy, Russia should be well on its way of developing its full potential as a global supplier of energy and agriculture and a privileged transit corridor across the whole of Eurasia.

Russia may even profit from climate change. Few may know that Russia -- with permafrost fast retreating -- is warming up faster than any other nation. That opens the vista of new fertile soils that could allow poultry and fish to be exported to -- where else -- China. Not to mention torrential amounts of fresh water. Chinese companies are buying large stakes in Russian fertilizer companies such as Uralkali as well as becoming partners of Singapore-based companies to go all out into food processing in Russia.

Contrary to what US "Think Tankland" never ceases to parrot, the Russia-China strategic partnership goes way beyond a mere supply-demand alliance of convenience. Were the Kremlin to take the fateful decision, Chinese companies could certainly rebuild creaking parts of Russian infrastructure in only a few years.

Related Topic(s): China Investment Corp; China Politics; China Russia Alliance; Vladimir Putin, Add Tags
Add to My Group(s)
Go To Commenting
The views expressed herein are the sole responsibility of the author and do not necessarily reflect those of this website or its editors.