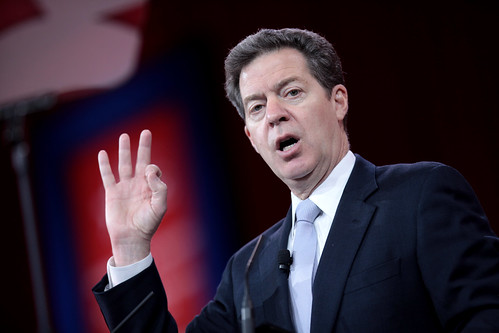 The verdict is in, and it's time for conservatives to face the cold hard facts.

And we know this is true thanks in part to Kansas Gov. Sam Brownback's 2010 decision to turn his state into a "real live experiment" in Reaganism and the religion of trickle-down economics.

Quickly after taking office, Brownback and the Tea Party-controlled legislature passed massive tax breaks for the state's 1%; repealed all income taxes for more than 100,000 businesses; tightened welfare requirements, making life harder for the working poor and poor children; privatized the delivery of Medicaid so his corporate buddies could have a bigger slice of the state action; cut $200 million from the education budget; eliminated four state agencies; and laid off 2,000 government employees.

In 2013, after he signed the largest tax cut in Kansas history with the help of legislators backed by the American Legislative Exchange Council (ALEC), he told The Wall Street Journal, "My focus is to create a red-state model that allows the Republican ticket to say, 'See, we have a different way, and it works.'"

And in 2016, six years after Governor Brownback took office and started shaping Kansas into the "red-state model," you'd be hard pressed to find anyone in their right mind, Republican or Democrat, who would say that the economy in Kansas "works."

Back when Governor Brownback initiated the plan, conservative economists like Arthur Laffer predicted a massive boom in the state, and the CATO-inspired Kansas Policy Institute projected that his tax cuts would create $323 million in new local revenues by the year 2018.

In reality, during the first year of Brownback's budget, the state lost $688 million and job growth shrank to 1.1 percent below the national average.

And it didn't get better.

In following years, job growth dropped to one-tenth of 1 percent, and personal income growth slowed from 6.1 percent to 3.6 percent.

According to the Institute of Taxation and Economic Policy, the poorest one-fifth of households in Kansas, households that make less than $23,000 a year, saw their average taxes go up about $200 a year, while the richest 1% are saving an average of $25,000 a year.

That means that under Sam Brownback's "red state model," the richest 1% in Kansas are SAVING $2,000 more in TAXES than the bottom fifth of households EARN in a year in INCOME.

As a direct result of this policy, now one health insurance CEO is taking his company across the border to Missouri, just to get away from the cruelty of Brownback's so-called "red state model."

Related Topic(s): Alec; Kansas; Medicaid; Reaganomics; Taxes, Add Tags
Add to My Group(s)
Go To Commenting
The views expressed herein are the sole responsibility of the author and do not necessarily reflect those of this website or its editors.