Here are the words of a man in serious denial:

"It's time to believe the promise of our future is better than the best days behind us."

It's evening in America.... 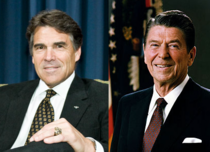 (Image by Unknown Owner)   Details   DMCA
The deeply disturbing similarities to George W. Bush aside, Rick Perry has also got that Ronald Reagan thing happening, have yo u noticed that? Good hair, telegenic, sunny disposition, smooth talker - and dumber than an empty box of Rice Crispies. Ronnie with a Texas twang . The perfect candidate in this era of soundbites and snake oil. Just when you thought that the 2012 clown parade could not possibly get any stupider, enter Rick Perry, stage right - extreme right .

Of course w e are thirteen months away from Election Day 2012 - a lifetime in politics as they never tire of reminding us. So much can happen between now and then that it staggers the senses to even attempt to comprehend it all. This much is certain: Despite her "victory" last week in the laughably irrelevant "Iowa Straw Poll" there is no way in fate's infinitely twisted scheme that Michele Bachmann is going to get the nomination of her party - not in 2012 or any other year for that matter . While the folks who tend to vote in GOP primaries in the south and many parts of the Midwest might think that sending this deplorable twit to the White House is just a dandy idea, I'm pretty sure that the winter's chill will sober up most of them when the primary season goes into full gear in January. Aimes, Iowa was her mountaintop. Let the poor, wretched woman savor her moment of glory.

Which brings us to the strange phenomenon of Rick Perry - or "Governor Good Hair" as the late, great Molly Ivins liked to refer to him. I miss that woman like nobody's business.

If this were 1960 it would have been a lot easier for me to dismiss our man Rick as a half-witted fringe candidate not to be taken seriously by anybody. Unfortunately 2011 is not 1960, and extremist politicians who would have felt right at home at a Nuremberg rally circa 1933 are pretty much the norm these days as far as the "party of Abraham Lincoln" is concerned. Rick Perry's candidacy isn't any political freak accident; it is fait accompli.

Rick describes himself as a devout Christian. Did you see his prayer rally last week? I took a pass. Watching politicians desecrate the teachings of Jesus Christ always puts me into a mean, blind funk. This is the same sociopath who refused to commute the death sentence of some guy who was convicted of setting an arson that killed his three children. The only problem was the fact that there was voluminous scientific evidence in the man's favor which pointed to the conclusion that the fire had more-than-likely been accidental. Like Bush before him, Rick just had to prove to the country at large just how "tough on crime" he was. After the poor man was executed - murdered in cold blood - by the state of Texas, an investigation was initiated to get to the bottom of what went wrong. Governor Perry put a stop to that investigation.

"Blessed are the merciful, for they shall obtain mercy."

Jesus of Nazareth
from the Sermon on the Mount

Some "Christian" that Rick Perry.

While your typical Republican primary voter may be smart enough to realize that Michele Bachmann doesn't stand much of a chance in the general election against an incumbent president, they're just dumb enough to see Rick as the winning alternative - and hell, who's to say that they're wrong? An electorate screamingly crazy enough to twice go with Dubya is capable of just about anything. I wouldn't bet even a small fortune on the chances of President Obama defeating him next year.

Some are implying that a "President Perry" would only be the final nail in America's coffin. I disagree. George W. Bush was the final nail. A Perry administration would merely prove to be yet another nail in a coffin that is already sealed shut. If he somehow miraculously makes it to the executive mansion on January 20, 2013, don't sweat it. One more reactionary cowboy in the Oval Office will only be anticlimactic. The eternal damage has been done. America is finished. Why get so bent out of shape about it? I'm not. I adjusted to living in a country in ruins a long time ago. You should, too.

The aforementioned Molly Ivins once advised us that putting people in charge of government who don't believe in government is generally not a particularly nifty idea. The gal had a talent for understatement, didn't she? Let me have a shot at it: Sending to the White House a guy who has twice - for the public record - hinted that his state might secede from the Union is as non-nifty an idea (and then some) as Molly's example.

NOTE TO MY BELOVED COUSINS, THE FABULOUS BARRAS FAMILY OF PORT ARTHUR, TEXAS: Forgive me for the following one, kids:


Not that I believe losing the Lone Star State would be such a national disgrace. That place is ju st too damned dysfunctional. And to think we fought a war with Mexico over the joint! I hardly think it was worth the effort. Be careful what you wish for - you know what I'm talking about? If they ever decide they need to leave the union, let 'em leave in peace. No civil war; no fuss - just let them go. Seriously

The theme to Rick's campaign will be the myth of the so-called "Texas Miracle", the claim that forty percent of the nations jobs created in the last three years were in fact created in Texas. In his column in this morning's New York Times, Paul Krugman made the following observation: 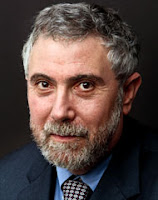 (Image by Unknown Owner)   Details   DMCA
"What Texas shows is that a state offering cheap labor and, less important, weak regulation can attract jobs from other states. I believe that the appropriate response to thi s insight is 'Well, duh .' The point is that arguing from this experience that depressing wages and dismantling regulation in America as a whole would create more jobs -- which is, whatever Mr. Perry may say, what Perrynomics amounts to in practice -- involves a fallacy of composition: every state can't lure jobs away from every other state."

Yeah, a whole lot of jobs were created in Texas in the last few years. About half of those jobs were the result of President Obama's hated stimulus package. The other half were mostly minimum wage. Would you like some fries to go with that Triple Whopper? Have a nice heart attack!

By the way, Rick Perry wants to do away with the primary process. He wants the task of sending Senators and Congresspersons to Washington to be placed back in the hands of politicians in the statehouse - not the people. Just like it was in the nineteenth century. Please vote Republican. Please? Make my job easier. I'm begging you.

I'm looking forward to the Perry Campaign like an eight-year-old kid looks forward to Christmas morning. A campaign as endearingly weird as that ought to be good for too much material to catalog. Can he make it all the way to the convention? It's not bloody likely that the religious bigots who now control that disgusting party will be nominating Mormon Mitt Romney anytime soon - the only one of the current frontrunners with an IQ higher than room temperature.

Oh, what the hell! Let's all pretend that it's morning again in America. Cheery optimism is the order of the day. Times as weird as these demand Rick Perry.

Tom Degan is a former Green Party candidate for New York State Senate. He writes on a blogsite called, The Rant by Tom Degan. He is the recipient of the Presidential Medal of Freedom.....Okay, he didn't really receive the Presidential Medal of (more...)
Related Topic(s): Commander-in-chief; Commons The Public; Computer Hacking; Governors; Jesus; Paul Krugman; Politicians; Primaries; South; State, Add Tags
Add to My Group(s)
Go To Commenting
The views expressed herein are the sole responsibility of the author and do not necessarily reflect those of this website or its editors.