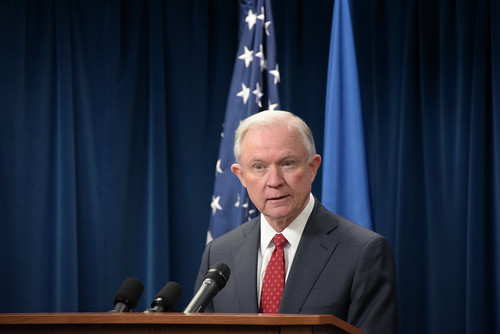 Sessions' recommendation is for one of three openings on the U.S. Sentencing Commission, which, during the Obama administration, recommended reductions in mandatory minimum sentences, especially for drug offenses, and which implemented an across-the-board reduction in sentences for nonviolent drug offenders.

More specifically, Sessions has ordered the Justice Department to urge the Commission to toughen sentences, especially for violent criminals, drug offenders, undocumented immigrant smugglers, and "career criminals." We probably can all agree that sentences should be tough for those people using violence in the commission of a crime or for those involved in human trafficking. But reinstating harsh mandatory minimums for nonviolent and/or first-time drug offenders is a mistake.

The problems with enhancing sentences for drug offenders and so-called career criminals are twofold. First, tough mandatory minimums simply don't work to reduce the crime rate. That's a proven fact. What does work, though, is rehabilitation and education, two things that are not found in the federal prison system.

When a person does 10 or 20 years (or longer) for a nonviolent drug offense, doesn't learn a skill in prison, or even how to read, and then returns home at the end of his sentence, what does Sessions think he'll do? He'll sell drugs, of course. It's the only thing he knows how to do. And in the meantime, the prisons are already full to bursting. The Bureau of Prisons accounts for a quarter of the Justice Department's entire budget. And its only accomplishment is to keep people in chains.

Second, what exactly is a "career criminal?" According to the Justice Department, it's any person with at least three arrests. It doesn't matter what those arrests are for, though. Do you have a DUI or trespassing charge from college? Strike one. Have you been arrested for protesting at a federal facility? Strike two. Any other federal arrest is strike three. Not only are you elevated on the federal sentencing chart, giving you a longer sentence, you face a tougher mandatory minimum, and your sentencing judge is not permitted any leeway in that sentence. You're treated the same way as somebody whose three crimes were murder, rape, and armed robbery. And remember, there's no such thing as federal parole.

The U.S. Sentencing Commission has seven members, but three of those slots are vacant; two more become vacant on October 31. By law, three of the members must be federal judges and no more than four can be members of the same political party. It's easy to get around that last proviso by simply naming a conservative Democrat or independent to the panel. The bottom line, though, is clear: Donald Trump and Jeff Sessions will control the Sentencing Commission in the next two months.

The only hope for holding off reimposition of the tough mandatory minimums that were lifted or eased during the Obama administration is through Congressional action. But don't hold your breath. Neither Senate Majority Leader Mitch McConnell (R-Kentucky) nor House Speaker Paul Ryan (R-Wisconsin) has been able or willing to push an already-popular bipartisan sentencing bill to his respective floor for a vote. And even if they did, Donald Trump would veto it.

Related Topic(s): Bipartisan; Crime; Jeff Sessions; Judges; Sentencing Sentences, Add Tags
Add to My Group(s)
Go To Commenting
The views expressed herein are the sole responsibility of the author and do not necessarily reflect those of this website or its editors.