Adolf Hitler was appointed Chancellor of Germany by the then German President, Paul von Hindenburg, on January 30, 1933. The maximum percentage of the vote gained by the Nazi Party in previous free elections under the Weimar Republic was in the 37% range. Nevertheless, in part because the two major opposition parties to the Nazis, the Communist Party of Germany (KPD) and the Socialist Party of Germany (SPD) were at each other's throats, the capitalist ruling class of Germany was able to persuade Hindenburg to give Hitler "a turn," promising that they would "keep him under control."

And now for something different on the subject: Heil Kittler!
(Image by Robin Iversen)   Details   DMCA

As it happened, Hitler, in part using his private army, the "Sturmabteliung" (SA), immediately began rounding up certain Communists and Socialists and imprisoning them, while others quickly left the country. However, at that point there were limits as to what Hitler could do to impose the Nazi will, under the law as it stood in Germany. Besides the parliament, the Reichstag, there were still the independent judiciary and the free press. (For years, Hitler and the Nazis had labelled the latter "Die Luegenpresse," "The Lying Press" [sound familiar?].) In order to impose the kind of dictatorial rule on Germany that the Nazis and their ruling class supporters --- led by such figures at Fritz Thyssen, the steel magnate, (who as early as 1923 was raising foreign money to support the Nazis, from such donors as a U.S. named George Herbert Walker) --- Hitler had to convince the Reichstag to give it to him. What better way to do that than to create a "national emergency?" To deal with it forcefully, of course, would require the granting of "emergency powers" to the Chancellor. And so, came the Reichstag Fire.

On February 27, 1933 the grand, historic, German Parliament building in Berlin, the Reichstag, was hit by a fire that would make it unusable until it was eventually restored after the end of World War II. The story of "the cause" that was released almost immediately (within hours) by the Nazis was that the fire was set by a mentally-handicapped Dutch former Communist turned anarchist, acting entirely alone, one Marinus van der Lubbe. (The Reichstag conveniently happened to be decorated with highly flammable furniture, drapes, and wall-coverings. Apparently, a few matches did the trick.) Within hours, Chancellor Adolf Hitler, Interior Minister Hermann Goering, and Propaganda Minister Josef Goebbels, et al, had proclaimed the fire to be the result of a KPD plot. (It happened that the KPD knew nothing of it and that the "incriminating documents" quickly produced by the Nazis were later proved to be forgeries. But that meant nothing at the time.) 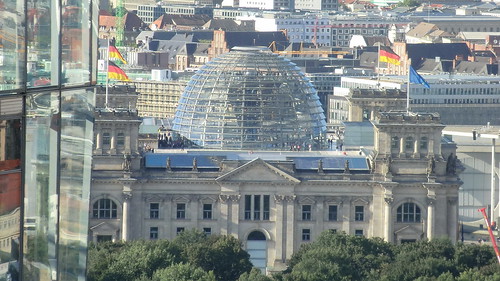 Berlin - Reichstagsgebude - combination of a modern Glass-Dome with the old building. Just imagine it alight.
(Image by Traveller-Reini)   Details   DMCA

The Nazis quickly created a national hysteria over the "threat of the KPD and the SPD," lumped together as "the Marxists," to the "peace and tranquility of the German nation," to the "security of the German volk." To deal with "the Marxist threat," on Feb. 28, the day after the Fire, before there could be any kind of investigation beyond the Nazi declarations and proffered false documents, with Pres. Hindenburg's approval, and in accord with a provision of the post-World War I Weimar Republic's Constitution, all of the civil liberties protections in it were suspended. But this wasn't enough for the Nazis.

On March 24, 1933, a Reichstag from which all the elected Communist deputies had been purged, along with a number of the Socialist deputies, and in which many of the Centrist Deputies were totally intimidated (at the time of the vote, the Reichstag's temporary chamber was surrounded by members of the SA [or "Brownshirts"]), passed a Constitutional Amendment giving virtual dictatorial power to Hitler and his cabinet for a four-year period. (Interestingly enough, it was subsequently renewed by the Nazi-appointed Reichstag every four years throughout the Nazi Period.) The amendment was called the Enabling Act. In practice, it made Hitler into a dictator with no checks of any kind on his power (unless it were to come from another non-Constitutional power bloc, like the Army). And so, the Reichstag Fire enabled the Nazi Party to gain something that would have been much more difficult for them to achieve without it: dictatorial control of the nation of Germany. Among other things, Hitler very quickly wrapped up the free press and the independent judiciary.

As it turned out, the story that van der Lubbe set the fire turned out to be a complete lie (see "The Reichstag Fire Trial, 1933-2008" (Tigar, M.E. and Mage, J., The Monthly Review, Vol. 60, No. 10, March 2009), based on evidence both from the time and more recently uncovered). The fire was actually set by a ten-member SA detachment operating under Goering's orders. And so, the Nazi dictatorship, which ultimately wreaked so much harm on the European nations and Germany itself, was established based on the use of the Big Lie Technique which the Nazis employed for so many years, both before and after they came to power. Which (of course) brings us to Trump and the "Border Crisis."

Trump is insisting that there is a "border crisis" (which there isn't). Just as Hitler lied about the cause of the Reichstag Fire, Trump is lying through his teeth in order to create the impression that there is one (and oh yes, at least even on Fox News two commentators agreed with that assessment --- of Trump's lying through his teeth). Further, he is demanding that Congress provide funding for "The Wall" that he promised his followers he would have built immediately upon obtaining the Presidency and, as is well known, that "Mexico would pay for it." (Of course, if there were a crisis at the border, a wall that would take some years to plan and actually construct --- after all the legal hurdles including overcoming many private suits by landowners [some of whom are life-long Republicans] along its course --- would hardly have dealt with it.)

Coming to AMERICA! How all those drugs really get it.
(Image by Prayitno / Thank you for (12 millions +) view)   Details   DMCA

But while Trump couldn't get his proposal through a Congress with Republican majorities in both Houses, he will certainly not be able to get it through the current Congress, with which the "great deal-maker" is totally incapable of negotiating. Following this latter debacle, in order to unilaterally get his way, Trump once again threatened to declare a "national emergency." He would then attempt to use such a declaration to implement his border policy, most likely attempting to use the Armed Forces to "build the wall." This would still take much more time to do than non-wall measures designed to really deal with the current situation (again hardly a "crisis-at-the-border"), which Democrats could support. Further, such a move would be of questionable Constitutionality. And further, if Trump were really interested in border security, not xenophobic propaganda, why has his Administration spent only a fraction of the funds already appropriated by Congress for it.

But of course, is what Trump is really after the establishment of a dictatorship? There are certainly many signs pointing in that direction, from his stripping of his Administration of any department heads who could, with their staffs, challenge his decision-making in so many areas, to his repeated and prominent use of the Presidential powers that he does currently have that are not subject to checks and balances, like those concerning tariffs and trade and certain international agreements (like "Paris" and the "Iran Deal"), and indeed setting immigration policy on such matters as the establishment of the Trumpcentration Camps that are currently growing in size and number along the Southern border. 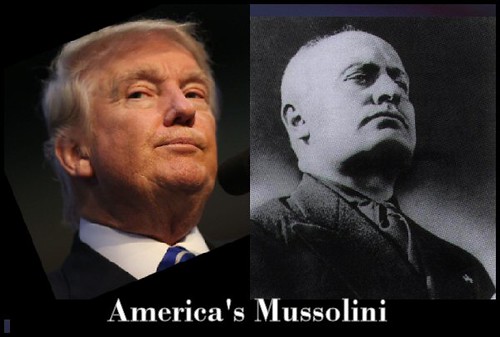 The parallels are striking and very disturbing. Hitler-Reichstag-Fire/Enabling Act. Trump-Border Crisis/National Emergency Powers. Are we at a major turning point in U.S. history? We may well be. And if the nation is not to go in the direction that Germany did in 1933, while the Democratic Party can play an important role in making sure that that does not happen, it is the Republican Party and the Right-wing of the U.S. ruling class that they represent, in the Courts and in the Congress, which will ultimately determine which path this nation will be taking, at least for now.

Steven Jonas, MD, MPH, MS is a Professor Emeritus of Preventive Medicine at StonyBrookMedicine (NY) and author/co-author/editor/co-editor of over 35 books. In addition to his position on OpEdNews as a "Trusted Author," he is a Senior Editor, (more...)
Related Topic(s): Border Cruelty; Border Dispute; Border Fence; Border Security; Border Wall; Congress; Crisis; Hindenburg; Hitler; Judiciary; (more...) Nazis; Reichstag Fire; Weimar, Add Tags  (less...)
Add to My Group(s)
Go To Commenting
The views expressed herein are the sole responsibility of the author and do not necessarily reflect those of this website or its editors.