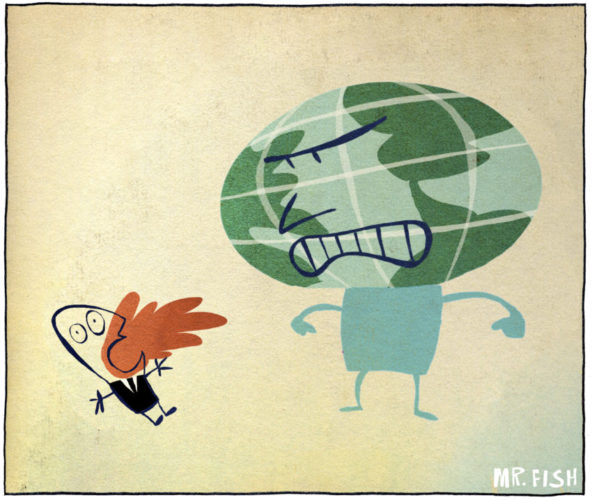 In 2017, Chris Hedges wrote about American society's refusal to confront climate change and sea rise. Now, in a month when a hurricane flooded parts of Louisiana and other states and when the Mississippi and some other rivers were at menacing levels, Truthdig reposts that Sept. 10, 2017, column. A new article by Hedges will appear Aug. 12 after he returns from vacation.

How many times will we rebuild Florida's cities, Houston, coastal New Jersey, New Orleans and other population centers ravaged by storms lethally intensified by global warming? At what point, surveying the devastation and knowing more is inevitable, will we walk away, leaving behind vast coastal dead zones? Will we retreat even further into magical thinking to cope with the fury we have unleashed from the natural world? Or will we respond rationally and radically alter our relationship to this earth that gives us life?

Civilizations over the past 6,000 years have unfailingly squandered their futures through acts of colossal stupidity and hubris. We are probably not an exception. The physical ruins of these empires, including the Mesopotamian, Roman, Mayan and Indus, litter the earth. They elevated, during acute distress, inept and corrupt leaders who channeled anger, fear and dwindling resources into self-defeating wars and vast building projects. The ruling oligarchs, driven by greed and hedonism, retreated into privileged compounds -- the Forbidden City, Versailles -- and hoarded wealth as their populations endured mounting misery and poverty. The worse it got, the more the people lied to themselves and the more they wanted to be lied to. Reality was too painful to confront. They retreated into what anthropologists call "crisis cults," which promised the return of the lost world through magical beliefs.

"The most significant characteristic of modern civilization is the sacrifice of the future for the present," philosopher and psychologist William James wrote, "and all the power of science has been prostituted to this purpose."

We are entering this final phase of civilization, one in which we are slashing the budgets of the very agencies that are vital to prepare for the devastation ahead -- the National Oceanographic and Atmospheric Administration, the Federal Emergency Management Administration and the Environmental Protection Agency, along with programs at the National Aeronautics and Space Administration dealing with climate change. Hurricane after hurricane, monster storm after monster storm, flood after flood, wildfire after wildfire, drought after drought will gradually cripple the empire, draining its wealth and resources and creating swathes of territory defined by lawlessness and squalor.

These dead zones will obliterate not only commercial and residential life but also military assets. As Jeff Goodell points out in "The Water Will Come: Rising Seas, Sinking Cities and the Remaking of the Civilized World," "The Pentagon manages a global real estate portfolio that includes over 555,000 facilities and 28 million acres of land -- virtually all of it will be impacted by climate change in some way."

As this column is being written, three key military facilities in Florida are evacuated: the Miami-area headquarters of the U.S. Southern Command, which oversees military operations in the Caribbean and Latin America; the U.S. Central Command in Tampa, in charge of operations in the Middle East and Southwest Asia; and the Naval Air Station in Key West. There will soon come a day when obliteration of infrastructure will prohibit military operations from returning. Add to the list of endangered military installations Eglin Air Force Base in the Florida Panhandle, the U.S. missile base in the Marshall Islands, the U.S. naval base on Diego Garcia and numerous other military sites in coastal areas and it becomes painfully clear that the existential peril facing the empire is not in the Middle East but in the seas and the skies. There are 128 U.S. military installations at risk from rising sea levels, including Navy, Air Force, Marine and Army facilities in Virginia. Giant vertical rulers dot the highway outside the Norfolk naval base to allow motorists to determine if the water is too deep to drive through. In two decades, maybe less, the main road to the base will be impassable at high tide daily.

Cities across the globe, including London, Shanghai, Rio de Janeiro, Mumbai, Lagos, Copenhagen, New Orleans, San Francisco, Savannah, Ga., and New York, will become modern-day versions of Atlantis, along with countries such as Bangladesh and the Marshall Islands and large parts of New Zealand and Australia. There are 90 coastal cities in the U.S. that endure chronic flooding, a number that is expected to double in the next two decades. National economies will go into tailspins as wider and wider parts of the globe suffer catastrophic systems breakdown. Central authority and basic services will increasingly be nonexistent. Hundreds of millions of people, desperate for food, water and security, will become climate refugees. Nuclear power plants, including Turkey Point, which is on the edge of Biscayne Bay south of Miami, will face meltdowns, such as the accident that occurred in the Fukushima nuclear plant in Japan after it was destroyed by an earthquake and tsunami. These plants will spew radioactive waste into the sea and air. Exacerbated by disintegration of the polar ice caps, the catastrophes will be too overwhelming to manage. We will enter what James Howard Kunstler calls "the long emergency." When that happens, our experiment in civilization might approach an end.

"The amount of real estate at risk in New York is mind-boggling: 72,000 buildings worth over $129 billion stand in flood zones today, with thousands more buildings at risk with each foot of sea-level rise," writes Goodell. "In addition, New York has a lot of industrial waterfront, where toxic materials and poor communities live in close proximity, as well as a huge amount of underground infrastructure -- subways, tunnels, electrical systems. Finally, New York is a sea-level-rise hot spot. Because of changes in ocean dynamics, as well as the fact that the ground beneath the city is sinking as the continent recovers from the last ice age, seas are now rising about 50 percent faster in the New York area than the global average."

A society in crisis flees to the reassuring embrace of con artists and charlatans. Critics who ring alarm bells are condemned as pessimists who offer no "hope," the drug that keeps a doomed population passive. The current administration -- which removed Barack Obama's Climate Action Plan from the White House website as soon as Donald Trump took office -- and the Republican Party are filled with happy climate deniers. They have adopted a response to climate change similar to that of the Virginia Legislature: ban discussion of climate change and replace the term with the less ominous "recurrent flooding." This denial of reality -- one also employed by those who assure us we can adapt -- is driven by fossil fuel and animal agriculture industries that along with the rich and corporations fund the political campaigns of elected officials. They fear that a rational, effective response to climate change will impede profits. Our corporate media, dependent on advertising dollars, contributes to the conspiracy of silence. It ignores the patterns and effects of climate change, focusing instead on feel-good stories about heroic rescues or dramatic coverage of flooded city centers and storm refugee caravans fleeing up the coast of Florida.

Droughts, floods, famines and disease will eventually see the collapse of social cohesion in large parts of the globe, including U.S. coastal areas. The insecurity, hunger and desperation among the dispossessed of the earth will give rise to ad hoc militias, crime and increased acts of terrorism. The Pentagon report"An Abrupt Climate Change Scenario and Its Implications for United States Security" is blunt. "Disruption and conflict will be endemic features of life," it grimly concludes.

But as Goodell points out, "In today's political climate, open discussion of the security risks of climate change is viewed as practically treasonous." When in 2014 then-Secretary of State John Kerry called climate change "perhaps the world's most fearsome weapon of mass destruction" and compared it to the effects of terrorism, epidemics and poverty, the right-wing trolls, from John McCain to Newt Gingrich, went into a frenzy. Gingrich called for Kerry's resignation because "a delusional secretary of state is dangerous to our safety."

James Woolsey, the former head of the CIA, wrote in a climate change report for the Pentagon titled "The Age of Consequences: The Foreign-Policy National Security Implications of Global Climate Change":

If Americans have difficulty reaching a reasonable compromise on immigration legislation today, consider what such a debate would be like if we were struggling to resettle millions of our own citizens -- driven by high water from the Gulf of Mexico, South Florida, and much of the East Coast reaching nearly to New England -- even as we witnessed the northward migration of large populations from Latin America and the Caribbean. Such migration will likely be one of the Western Hemisphere's early social consequences of climate change and sea level rise of these orders of magnitude. Issues deriving from inundation of a large amount of our own territory, together with migration towards our borders by millions of our hungry and thirsty southern neighbors, are likely to dominate U.S. security and humanitarian concerns. Globally as well, populations will migrate from increasingly hot and dry climates to more temperate ones.

Related Topic(s): Climate; Denial; Devastation; Flooding; Solar; Vegan, Add Tags
Add to My Group(s)
Go To Commenting
The views expressed herein are the sole responsibility of the author and do not necessarily reflect those of this website or its editors.