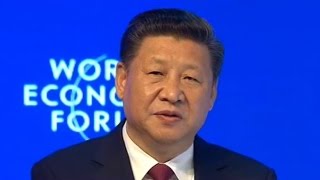 He did it, his way; Chinese President Xi Jinping descended on the Swiss Alps; profited from a geopolitical vacuum only three days before Donald Trump's inauguration with the Atlanticist West mired in stagnation and/or protectionism; unleashed a charm offensive; and deftly positioned China in the lead of "inclusive" globalization.

In a wide-ranging speech that went from global angst to China's new normal, Xi sounded all the right notes that global capital needed to hear; protectionism is like "locking oneself in a dark room," and "no one is a winner in a trade war."

His speech delved into the necessity of peace in Syria, the perverse effects of the absence of financial regulation, and the struggle for "balance between efficiency and equity."

So onwards with the fourth industrial revolution -- and may China deliver.

Compare these "globalist princelings" with the Trump camp, represented by one of his official business advisers, Anthony Scaramucci, founder of hedge fund SkyBridge Capital and Salt, a not exactly stellar Las Vegas investment conference (the next one is at the Bellagio in May).

Where's the ticket to the Rothschild party?

A "humanized" Davos 2017 is very worried about saving the world -- or at least saving the wealthy from most of the world. The WEF has suddenly discovered that globalization as we know it fosters massive inequality, as much as globalization's self-appointed managers remain inflexible about their moral right to bend whole nations to their will, as the "miraculous" numbers of the Irish economy attest.

Thus an alarmed WEF is promoting at least six sessions discussing inequality, from "Combating Rising Insecurity and Inequality" to "Squeezed and Angry: How to Fix the Middle Class Crisis," starring IMF's Christine "Vuitton" Lagarde and a bunch of hedge funders.

And this while Oxfam revealed to the world the real G8 of inequality -- as in those individuals who own as much wealth as the poorest 50% of the world combined. Call them the Kings of Globalization -- featuring, among others, Bill Gates, Amazon supremo Jeff Bezos, Facebook's Mark Zuckerberg, Oracle's Larry Ellison and Michael Bloomberg.

In pure neo-Dadaist fashion, there could not be a more graphic emblem for inequality than Davos itself. To get a green card all-area-access, mostly in and around the Grandhotel Belvedere, corporations must become strategic partners of the WEF.

The list is a beauty. Each membership costs a whopping US$600,000, allowing a CEO to bring up to four cohorts; but still they must pay for each individual ticket. And even that does not guarantee an invitation to the glitziest party in town, thrown by Nat Rothschild in tandem with Russian billionaire Oleg Deripaska.

Still, those who shelled out the cash will hardly resist the chance to hear Facebook's COO Sheryl Sandberg (with a US$1.3 billion fortune) expand on how "older" global leaders can profit from the optimism of youth. Eric Schmidt (worth US$11 billion), chairman of Google's parent company Alphabet, is also in town, but this time he opted for discretion.

Listen to the sound of my "win-win" clapping

Xi was very careful not to advertise a new "Chinese consensus," or model, as the model itself is being carefully, and painstakingly, tweaked.

Related Topic(s): Financial; Global Capitalism; President Xi Jinping; Speech; Trade, Add Tags
Add to My Group(s)
Go To Commenting
The views expressed herein are the sole responsibility of the author and do not necessarily reflect those of this website or its editors.