This article was first published on October 26, 2018 by Truthout. 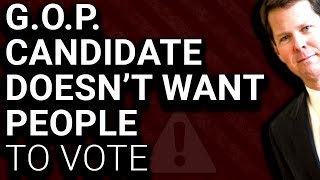 Last year, Brian Kemp, Georgia's secretary of state canceled the registrations of over half a million Georgians because they left the state or moved to another county. Except they didn't. The nation's top experts in address location reviewed Kemp's list of purged voters -- and returned the names and addresses of 340,134 who never moved at all.

John Lenser, CEO of CohereOne of San Rafael, California, led the team analyzing the purge list. He concluded, "340,000 of those voters remained at their original address. They should have never been removed from the voter registration rolls."

This is the story of the mass exodus from Georgia that never happened, and the mass purge of voters by Kemp, GOP candidate for governor, through methods guaranteed to disproportionately take away the vote from the young, the poor and voters of color.

It began five years ago, when Kemp stonewalled my first requests for information on purges in Georgia, first for Al Jazeera and Rolling Stone, now for Truthout and Democracy Now! It took my lawyer's threat of a federal lawsuit, filed last week in Atlanta federal court, to blast the list of the electorally doomed from Kemp's hands.

And the rest of the voters of this supposed mass migration?

The experts ran the names through an "advanced address hygiene process," that is, digging through dozens -- up to 200 -- dynamically updated databases (such as cell phone bills and tax filings), as well as limited-access files at the post office, to get the location of voters. They accomplished this with astonishing accuracy -- something the state of Georgia should have done.

The result: GregPalast.com has a list of 340,134 voters who never moved an inch. Kemp has sent them no notice -- none -- but they have lost their right to vote.

How did Kemp get away with this mass flushing of the voter rolls? I call it, "Purge by Postcard."

It wasn't invented by Kemp. It's used in dozens of states, mostly those controlled by Republican election chiefs.

It works like this: If you miss an election, Kemp sends you a postcard. It looks like junk mail. But if you read the block of print carefully, it asks you to return the card to Kemp after you've filled in the address that's already on the front of the card.

If you don't return the card, and you miss an election, Kemp takes out his eraser and cancels you off the registration rolls.

How can he do that? Legally savvy readers may know that the National Voter Registration Act of 1993 prohibits canceling the registration of a voter who chooses not to vote.

Greg Palast's investigative reports appear in Rolling Stone, the Guardian and on BBC Television. His latest film, The Best Democracy Money Can Buy, on how Donald Trump stole the 2016 election, is available on Amazon. Palast is Patron of the Trinity (more...)
Related Topic(s): Brian Kemp; Georgia Politics; Voter Fraud; Voter Registration, Add Tags
Add to My Group(s)
Go To Commenting
The views expressed herein are the sole responsibility of the author and do not necessarily reflect those of this website or its editors.