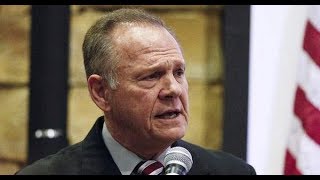 Good old godly Roy Moore now has a page on his website where you can contact him and tell him if you've been approached by the evil media trying to dig up dirt on him.

This follows news that Alabamians have been receiving robocalls from someone claiming to be "Bernie Bernstein of the Washington Post" offering to pay for salacious stories, which, curiously enough, is the same line that Breitbart and other defenders of mall-stalking goobers are taking, i.e., that the media are paying people to smear good old Roy.

Immediately upon hearing of this opportunity, I leapt at the chance to offer my help to this Christian knight-errant, as you can see below. I encourage all good folk who want to make this country safe again for sweaty, jowly goobers to paw teenage girls to do the same.

"Dear Roy, I was sitting in the bathtub trying to calm down after binge-watching reruns of Duck Dynasty when someone knocked on the door. I ran down the steps to answer the door but noticed that I'd forgotten my towel so I grabbed a Kleenex and held it over my privacy and opened the door. Standing there was a man I couldn't absolutely swear was Jewish but you know some of them don't look Jewish like that Ronan Farrow who is Woody Allen's son but looks like Frank Sinatra who I believe was an Italian and not Jewish.

"Anyway, this man asked me if I would go on the record to the Washington Post and say that Judge Roy Bean Moore had tried to get in my underwear 35 years ago. I said absolutely not. I wasn't even in the country 35 years ago I was in Guatemala if that's any of your business. But, I said to him, even if Judge Roy Bean had tried to get into my underwear 35 years ago or 35 days ago I would still vote for him because that's what Jesus would do because of Moslems and fairies.

"So, I said to him, you can go tell George Soros and Jeff Bozo I'm not going to smear a godly man for doing what any red-blooded American male would do in similar circumstances. He said, OK then but then he said he had to sneeze and because my mama raised me to be polite I handed him my Kleenex and the next thing I know there were CNN cameras filming me and the next thing I know the video went viral and now all the guys at the pool hall look at me funny.

"So Judge Roy Bean if you get to the Senate like I know God wants you to I hope you will use your pull to get YouTube to take down that video because it was kind of cold that day and it is not really representative of my natural nature.

"Thank you and God bless. Your pal, C.K. Dexterhaven"

Related Topic(s): Judge Roy Moore; Rescue; Satire, Add Tags
Add to My Group(s)
Go To Commenting
The views expressed herein are the sole responsibility of the author and do not necessarily reflect those of this website or its editors.