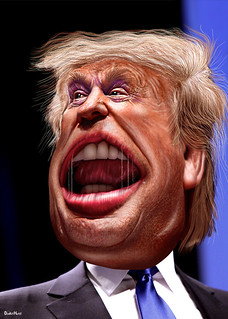 Trumpster
(Image by DonkeyHotey)   Details   DMCA
Last Jan. 19, 13 days before the Iowa caucus, Donald Trump took a bizarre trip back to the future to get an adoring endorsement from Tea Party darling Sarah Palin. He wanted her help in responding to the Republican establishment's outspoken distaste for him. And she gave it her all : "Right wingin', bitter clingin', proud clingers of our guns, our God, and our religions, and our Constitution. Tell us that we're not red enough? Yeah, coming from the establishment. Right."

Hearing her reminded me of what would have happened to us if (then) 71-year old John McCain had won in 2008 and then died or became incapacitated in office: a dangerously unfit person would have become President. In 2016, however, the party's base chugged the kool-aid by putting a Palinesque nominee at the top of its ticket.

The GOP establishment now seem to be swallowing their dismay and sidling up to Trump. To understand this change, we need to distinguish two different strands in their opposition to him.

The first strand is that he's not a "true conservative." He seems (so far) to be unsympathetic with conservative memes such as maintaining a global military force, imposing "Christian" social conservatism, and so-called free trade . He has said he won't mess with Social Security and Medicare. However, Trump's record of flip-flopping gives GOP regulars hope that he will "moderate" his positions come November.

The second strand is that Trump's ignorance and character defects make him unfit to be President. His lies are so frequent and reckless that FactCheck.org admits "we've never seen his match." He is also matchless "for his brazen refusals to admit error when proven wrong." The ease with which he behaves this way shows a disturbing combination of dishonesty and ignorance.

For instance, he still refuses to retract his birther claims about Barack Obama. And, on the Nov. 22 broadcast of ABC's This Week , he claimed that "There were people that were cheering on the other side of New Jersey, where you have large Arab populations. They were cheering as the World Trade Center came down." In response to a barrage of objections that this never happened, he tweeted the next day: "I want an apology! Many people have tweeted that I am right!" There is no written or televised record of what Trump claimed to see, and no evidence from any source.

His policy pronouncements often show not only ignorance but also a failure to think and reflect before he opens his mouth. For example, in a March 30 interview with Chris Matthews, he not only supported an abortion ban, but also said that "there has to be some form of punishment" for the woman having the abortion.

Last Dec. 3 Trump said on Fox News that when battling terrorists, "you have to take out their families." He has repeatedly promised to use torture, and would bring back "a hell of a lot worse than waterboarding." These boasts prompted Michael Hayden, the former head of the NSA and CIA, to say that "If he were to order that once in government, the American armed forces would refuse to act."

The list of his absurd and harmful proposals also includes a "total and complete shutdown of Muslims entering the United States," building a wall along the 2000-mile border with Mexico to keep out the "rapists" and other criminals streaming in, deporting 11million illegal immigrants and letting Japan and South Korea acquire nuclear weapons to defend against North Korea.

Trump is a misogynist--someone who looks down on women as inferior even though he constantly boasts of his success in pursuing them as sex objects and trophies. He even sexualizes his own daughter, saying to Howard Stern that "I helped create her. Ivanka. My daughter, Ivanka. She's six feet tall, she's got the best body." He admits to Rolling Stone that "If I weren't happily married, and ya know, her father""

If women incur his displeasure, he will viciously attack their appearance. As Megyn Kelly of Fox News reminded him during the first GOP debate: "You've called women you don't like fat pigs, dogs, slobs, and disgusting animals." When he was later asked about Kelly's remark, he suggested it was due to her period: "You can see there was blood coming out of her eyes, blood coming out of her wherever."

The message that Paul Ryan and other Republican 'serious people' are putting out to the media is that if Trump can take back a few of his deviant positions, the party will unite in support of him. And Trump seems willing to do this, as in this May 13 statement : "Look, anything I say right now -- I'm not the president. Everything is a suggestion."

In other words, the GOP is willing to have a dangerously ignorant and incompetent person as President, just like their roll of the dice with Palin in 2008. Only this time, if they win, a fool will be at the top of the ticket with his hand instantly on the nuclear trigger.

Republicans must ask themselves what it is about their "true conservatism" that leads them to clothe it with the loud-mouthed vulgarity and misogyny of a Donald Trump in order to please their base.