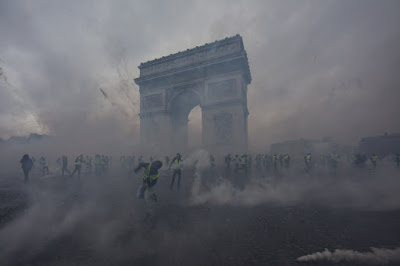 It has delivered a sharp and refreshing smack in the face to the smuggest of smug, entitled neoliberal brats, Emmanuel Macron, forcing him to retreat on substantive tax and minimum wage issues. It has also raised a raft of issues from wealth inequality (including demands for higher taxes on the rich) to a rejection of austerity and the dreaded Frexit.

Most importantly, it has acted outside the gatekeeping of traditional opposition parties and institutions--including those of the left, which have all been thoroughly decaffeinated and beguiled by the fantasia of Third-Way EU becoming "Social Europe." The Yellow Vest movement is millions of people out in the street, engaged in militant, confrontational protest, talking to and acting with each other unsupervised, telling the governing elite: "Va te faire foutre!".

A self-mobilization of the working class: This is the specter of Europe past, which Third-Way politicians and intelligentsia thought they had once and for all banished to the netherworld a few decades ago. The Yellow Vest movement, now spreading to other counties, is striking a new body blow to the teetering edifice of neoliberalism that has been built on the bones of the working-class lives in Europe and America over those decades.

This explains why the American mainstream media has avoided focusing on the Yellow Vest movement. The left, on the other hand, must be overjoyed, right?